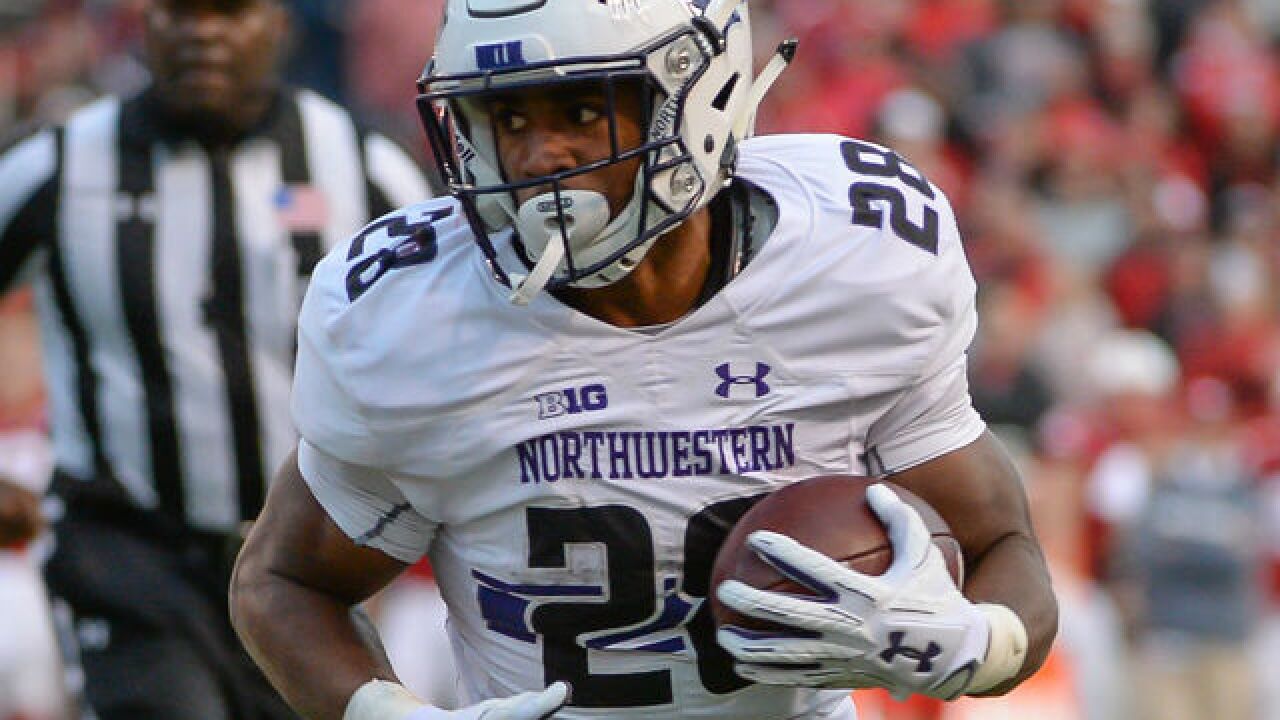 Copyright 2018 Scripps Media, Inc. All rights reserved. This material may not be published, broadcast, rewritten, or redistributed.
<p>Northwestern sophomore running back Jeremy Larkin announced his retirement from football on Monday afternoon after a diagnosis of cervical stenosis. (Photo by Steven Branscombe/Getty Images)</p>

“He is such a great person,” said Hilvert, who is now the Baldwin-Wallace University head coach. “Every game he made an impact no matter what. He was a guy who was a great leader.”

Larkin, a sophomore standout at Northwestern University, retired from football Monday morning due to a recent diagnosis of cervical stenosis. The condition is not life-threatening but prevents his continued participation in football, the school announced.

Larkin, a 2016 La Salle graduate, had 346 rushing yards, 19 catches for 127 yards and five touchdowns in the opening three games of the Northwestern season - his first as the Wildcats’ primary running back.

"Football has been a lifelong passion and it has been a process to reconcile the fact I won't be on that field again, given I've played this game since I was five years old,” Larkin said in a statement. "I'm extremely appreciative of the Northwestern sports medicine and athletic training staffs for uncovering this condition, and for my coaches and the medical staff for always putting my health first. I came to this university to engage at the absolute highest level on the field and in the classroom, and I'm grateful for the opportunity to continue one of those while supporting my teammates from the sideline."

Larkin, who lived in Fairfield during his high school career, had 618 yards and five touchdowns in a backup role as a freshman with the Wildcats.

“The discovery of this condition allowed Larkin and his family to make an informed decision for his long-term health and well-being,” Northwestern football coach Pat Fitzgerald said in a statement. “For those of us who have known Jeremy Larkin since his high school days, his future is exceptionally bright. I can't wait to see the impact he makes in our world."

"You are sad for Jeremy because of what he stood for," said longtime La Salle assistant football coach Brian Heidorn. "He's a role model. He's a quality, Grade A person."

Larkin rushed for 1,829 yards and 28 touchdowns his senior season with the Lancers. He had 27 receptions for 639 yards and eight touchdowns. He had 15 carries for 138 yards and three touchdowns in the 2015 Division II state final, a 49-28 win over Perrysburg.

He accounted for 8,326 all-purpose yards with 95 touchdowns for his three-year varsity career. He won the LaRosa's MVP Award in 2016.

Jeremy Larkin, who initially gave a verbal commitment to the University of Cincinnati in football, also played basketball and ran track at La Salle. He was a freshman starter on the basketball team for then-Lancers head coach Dan Fleming. He was a strong rebounder and defender who always put in the time and effort to compete relentlessly in basketball.

“What stands out for me is the type of person he is and the character he has,” Fleming said. “He was just a joy to be around.”

Fleming texted with Larkin's family on Monday. He said Jeremy may eventually become an assistant coach with Northwestern.

Larkin's legacy hasn't been forgotten at La Salle or in the Big Ten.

“He respected everyone, but he had zero fear of any opponent,” Fleming said.