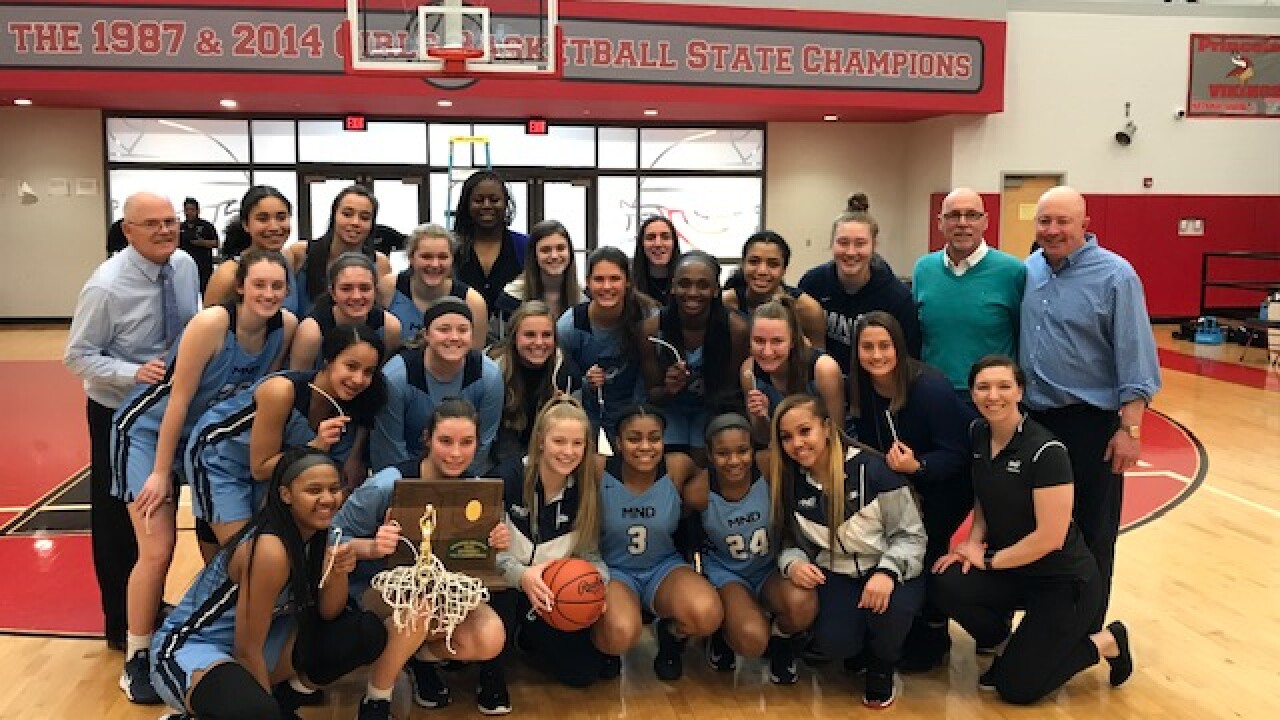 "They've been under pressure all year," Rogers said. "You know they've played an unbelievable schedule and to get through this regional is without a doubt the toughest in the state. There is so many great teams and coaches. Our kids have just a knack of believing."

The Cougars rallied to defeat Kettering Fairmont 47-41 in front of a packed gymnasium at Princeton High School on Saturday afternoon. It was the 44th consecutive win for the Cougars.

Sophomore guard KK Bransford scored a game-high 20 points to go along with eight rebounds and five assists to lead the Cougars. She also reached the 1,000 points career milestone on a dribble-drive layup with 3:38 left in the fourth quarter.

Bransford, who became the eighth MND player in program history to reach 1,000 career points, said she was concerned only about the victory.

"It was definitely a bonus," Bransford said of reaching the milestone.

Senior point guard Makira Cook scored 10 points and had five rebounds and five assists for the Cougars, who won the regional title for the 10th time in program history. They will play March 13 in the second state semifinal of the night.

"It's so special," said Cook, a University of Dayton signee. "It means so much to me."

MND, ranked No. 3 nationally by the MaxPreps Xcellent 25, advances to a Division I state semifinal March 13 at St. John Arena in Columbus. The reigning state champion Cougars will play the winner of Saturday night's regional final between Perrysburg (20-6) and Toledo Notre Dame (23-3).

"I think every kid deserves to go up there and see what this is like," said Rogers, a Jersey Mike's Naismith high school coach of the year finalist. "This group -- I am really happy for them."

MND trailed the entire first half, including an 11-point deficit at the end of the first quarter.

But the Cougars didn't panic.

"It was very physical," Bransford said. "They have height and they have strength so we just had to get through the physicality of the game and keep pushing through."

"I just feel like if we get through the third quarter that we got them," Cook said. "And we just got to stay mentally sharp and stay calm."

The Cougars chipped away at the Fairmont lead midway through the third quarter. Cook's layup in the lane with 1:17 left in the third gave MND its first lead of the game (35-34). The Cougars never trailed again.

The Cougars aren't taking anything for granted entering the state Final Four.

"It's a very rewarding thing," Bransford said of this season. "Coach Rogers always keeps our head down and we stay together. And I think us staying together makes us a little bit more successful."