Undefeated Cougars dine as a team, win as a team 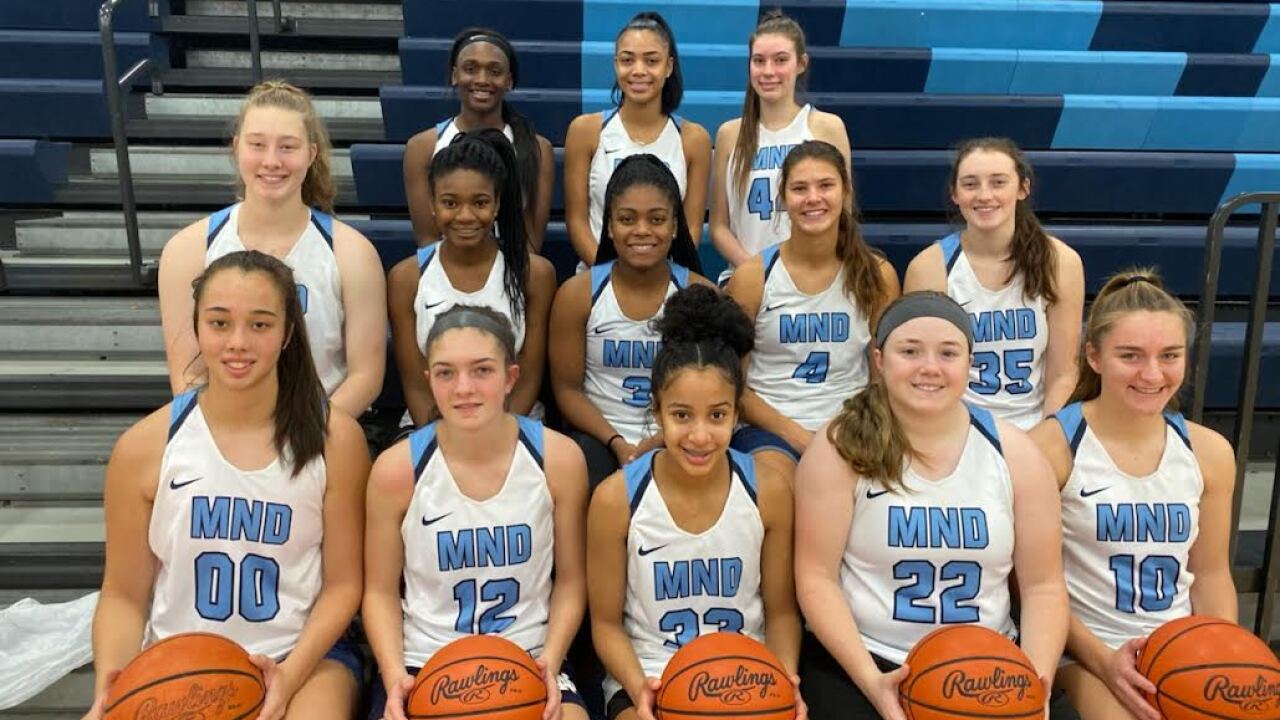 Provided
The Mount Notre Dame basketball team is 24-0 for the first time since the 2003-04 season, according to Cougars coach Dr. Scott Rogers.

The visit has become an annual tradition for the MND program during the sectional tournament. The meal is the coaches' treat.

"We are already really close, but it just made us closer and it's just fun," MND senior point guard Makira Cook said.

So if the coaches take the opportunity to discuss the tournament brackets over some barbecue, sometimes you just roll with the hoops conversation.

"We're like, 'We can't get a break from basketball,'" senior forward Grace Centrulla said with a smile. "But, we love it."

MND coaches, fans and supporters love the way the state's top-ranked Division I team is playing entering this week.

The Cougars completed their first undefeated regular season (22-0) since the program's first state championship in 2003-04, according to MND coach Dr. Scott Rogers.

But, you won't find any discussion about national or state rankings inside the MND gymnasium. In fact, practice is designed to be more rigorous early in the sectional tournament in order to prepare for the later rounds.

"They realize that this is an entirely new season," said Rogers, one of five finalists for the Jersey Mike’s Naismith High School Coach of the Year. "We're very proud of what happened during the regular season. It doesn't happen that often. There has been a lot of great teams around here in recent years that haven't been able to do that. We'll enjoy it afterward."

MND is led by several players including sophomore guard KK Bransford, who is on the MaxPreps national player of the year watch list.

Bransford averages 19.5 points, 6.4 rebounds, 2.5 assists and 2.4 steals and is shooting 54 percent from the field. She has 922 career points, according to the MND athletic department.

"Just her basketball IQ is what is so incredible," Rogers said. "She sees things as a coach would see them a lot of times. She is two or three passes ahead on a play. Instinctively, she is beyond her years and I think that's what's really made a big difference with her this year."

Bransford, who led some shooting drills at 6 a.m. with her teammates early last fall, said she has really enjoyed this year's journey.

"Last year I was a freshman so I was a little nervous, but now they are like family," Bransford said. "I am really comfortable and having a great year."

"I don't know where we would be without her," Rogers said. "We have some really good players. I've always said we are always blessed with great players and great people, but she has evolved into one of the best point guards in her class in the country, not just Ohio. And I'm really proud of how she's matured that way."

Junior guard Laila Phelia (13.3 ppg., 4.2 rpg.), sophomore forward Abby Wolterman, junior forward Brianna Counts and Centrulla have been among the other players who have made significant contributions.

"We've had the toughest schedule that we've probably ever had," Rogers said. "I think we've played four teams in the (national) top 25. But again having said that, it doesn't mean anything now. But, it's helped that development process for sure. "

Cook, who became the seventh MND player in program history to reach 1,000 career points, said it's been fun to watch how each player has grown since late November especially persevering through a difficult schedule.

"I feel like it has really prepared us well because we're ready for everybody and whoever comes at us," Cook said. "And we're just mentally and physically focused."