'Faith, family and one big heart' is the focus of MND coach Dr. Scott Rogers 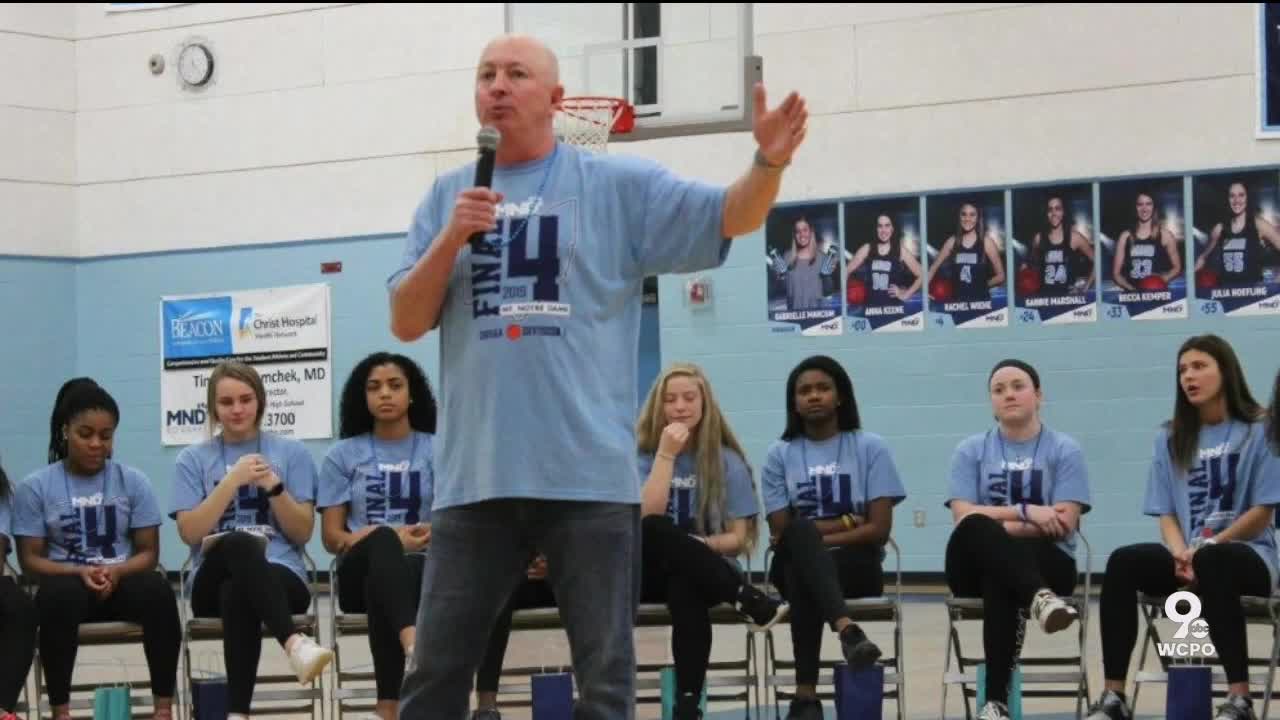 Mount Notre Dame basketball coach Dr. Scott Rogers is grateful for faith and family as he recalls a time in 2010 when he nearly died after open-heart surgery.

INDIAN HILL, Ohio — Dr. Scott Rogers felt as though he was on fire from his chest to his feet.

Blood leaked profusely from the aorta near his heart. Then, the light switch turned off.

In that moment, the longtime girls basketball coach believed he had died.

"I just didn't want to go," Rogers said. "I was just fighting like hell to try to stay here."

"I really wasn't ready to talk to him at that point in time in my mind," Rogers said. "I felt a hand on my right shoulder, so I was just being guided, I guess."

It has been nearly 10 years since Rogers experienced a leak behind his aortic graft after open-heart surgery at Christ Hospital.

"I told (my wife) Karen that I wanted to sit up, and as soon as I sat up there is a drainage bag next to you for your chest cavity and two liters of blood poured out of me," he said.

Several hospital staffers rushed to his aid. As he was wheeled down the hall, he felt like death was imminent.

"I was holding on literally by my faith," Rogers said.

A different outlook on life

Rogers, a dentist at Batavia Hills Family Dental Care, is also the head coach at Mount Notre Dame, one of the most successful girls basketball programs in the country.

For years, he has been reluctant to publicly share his story but now hopes to pay it forward with the aim to inspire others during this COVID-19 pandemic.

Rogers, his family, the MND players and their families are trying to make the best of the situation during this unique time. Rogers said he prefers to embrace each day rather than fear it.

"As hard as it is for us to wrap our heads around this thing, there are terrible stories, including people dying everywhere," Rogers said. "I am hopeful my experience will give someone hope. If it wasn't for God and my family and close friends, I wouldn't be here."

Rogers said he is fine with not knowing all the details of what happened Nov. 30, 2010; he shaves the scar on his chest as a reminder of how precious life is.

"I think for me that's what is overwhelming about it: 'OK, that could've been his time and it wasn't,'" said his daughter, Brooke Lattimore. "How lucky are we that for the past 10 years we have him still here with us to continue to experience life with because we adore him so much."

Karen Rogers, Scott's wife of nearly 35 years, was by his side that late November day in 2010. She prefers not to dwell on those memories but on the different outlook he gained from the experience.

Though Rogers is undoubtedly grateful, his drive remains the same, his daughter said.

"He's dysfunctionally competitive, and I don't think that will ever change," Lattimore said. "Nothing suits him better. Not even golf in the summer or dentistry than him coaching. He was made for it."

Rogers was one of five finalists this past season for the Jersey Mike’s Naismith High School Coach of the Year award after leading the regional champion Cougars (28-0) to a top-five national finish in three major rankings after the state tournament was canceled due to the pandemic.

The game of basketball has meant so much to his life, and his heart surgery is woven into his passion.

"That's one of the reasons why I went back to Mount Notre Dame," Rogers said. "I just felt a calling to coach in that environment, where faith is a huge, huge factor in what we do every day."

Living with a purpose

Rogers doesn't take credit for his recovery; he couldn't thank the hospital staff enough for their efforts to resuscitate him.

"He's one of those guys that when you see him you feel like you immediately know him," said Dr. Shawn Carson, an anesthesiologist who was on call that day in 2010 and who is Rogers' friend and neighbor. "He's just approachable and very complementary to a lot of different personalities, and it makes it very, very easy to be around him."

Rogers remains on heart medication and has blood drawn every three weeks in order to make sure there are no complications.

Although he's a “glass half full” kind of person, he said he has fought bouts of depression.

"It just changes you and your perspective," Rogers said. "And if you don't have faith when you go through something like that you sure as heck better afterwards because I felt that presence for sure. People can say maybe you were just thinking that -- it really doesn't matter because it's what I felt."

Rogers said he believes his will to live played a significant role in why he survived.

"I am sure you've heard and the irony is not lost on me but his motto to us and his teams and just in life is 'faith, family and one big heart,'" Lattimore said. "He's said that to us for as long as I can remember."

Rogers said he isn't one to wear his faith on his sleeve, but he's motivated to make an impact each day.

"It was so personal – I don't want to feel like I ever preach because of it," Rogers said. "It was something that happened to me and my family. I just feel very blessed that I was able to come out of it in a good way and hopefully can make an impression on somebody that has a little different thing going on, especially when they're down."