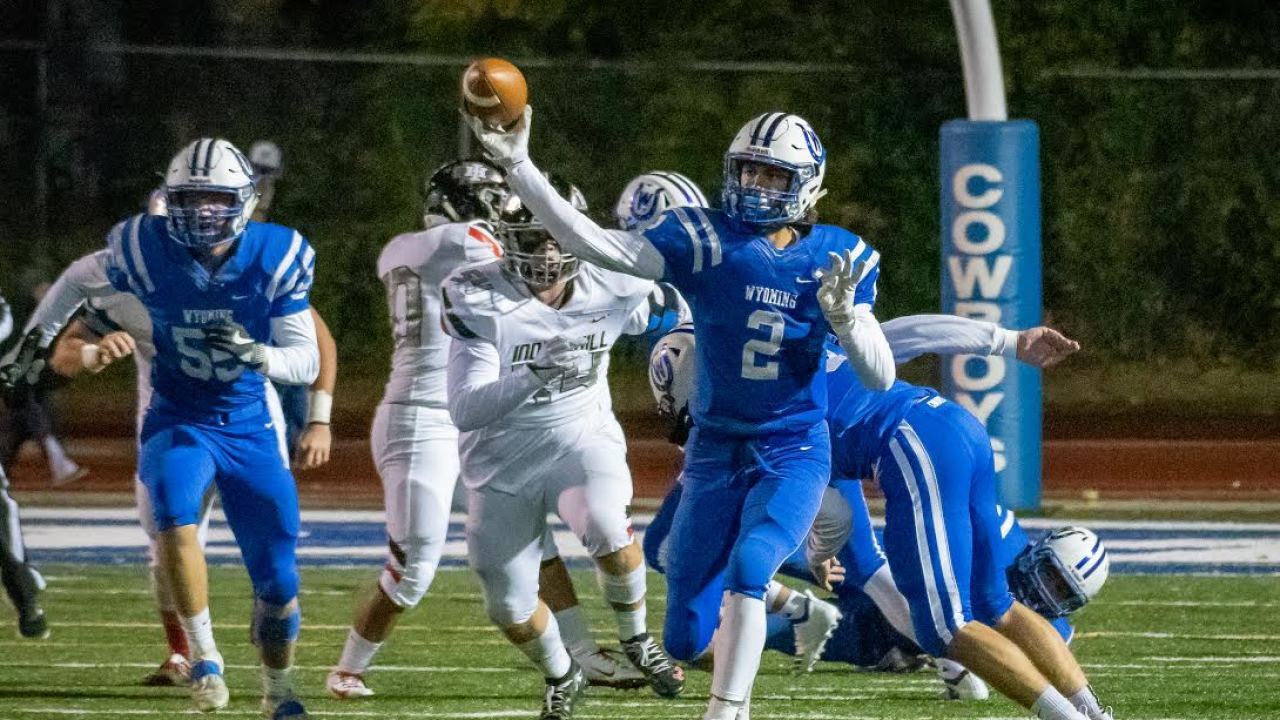 Tim Wilking
Wyoming 2020 quarterback Evan Prater won the Ohio Mr. Football award this past season and is ready to start his college career at the University of Cincinnati.

MaxPreps chose the top male athlete in every state of the country along with the District of Columbia.

Wyoming coach Aaron Hancock spoke with Prater Thursday and said the standout is ready for his next journey with the Bearcats.

"He's just always a great competitor," Hancock said. "I think his enthusiasm of walking out onto the practice field every day and he's just fun to be around. He's got great energy and love for the game."

Prater completed his high school career by throwing for 5,699 yards and 72 touchdowns and rushing for 4,124 yards and 73 touchdowns.

He threw for 1,816 yards and 21 touchdowns and rushed for 1,509 yards and 28 touchdowns this past season for the Cowboys, who were a Division IV state semifinalist.

"I think there is a sense of just genuine qualities that make him one of the best players that I've ever coached," Hancock said. "He does a great job of pushing himself and competing but also just being a kid. I think he's got a great personality. He's learning the game."

Prater, who had a 40-2 record as a high school starting quarterback, led the Cowboys to the Division IV state championship in 2018.

Prater was also a basketball standout for the Cowboys. The forward averaged 19.4 points, 6.7 rebounds and four assists for Wyoming (24-1) this past season.

Mayer, named the 2019 Kentucky Mr. Football by the Associated Press and Kentucky Football Coaches Association, helped to lead the Colonels to the 5A state championship this past season. He was named the game MVP.

The 2019 Gatorade Kentucky football player of the year had 49 receptions for 970 yards and 15 touchdowns. He also had two rushing touchdowns.

Sports Illustrated said Mayer was arguably the best high school tight end in the country last season and that he could make an immediate impact in South Bend.

Mayer won state titles in football (2017) and basketball (2018) entering his senior season. He decided not to play basketball this past winter for the Colonels.

“He is the greatest athlete in the history of the school, bar none,” CovCath assistant basketball coach Joe Fredrick told WCPO in July 2019.

CovCath coach Eddie Eviston said he'll always remember Mayer as a player who could completely dominate during a game.

"He wanted to be the best every rep he took and you never had to worry about him being ready to perform," Eviston said. "All the while he was humble and a great teammate."