Christmas Eve not expected to be merry for Bengals or fans 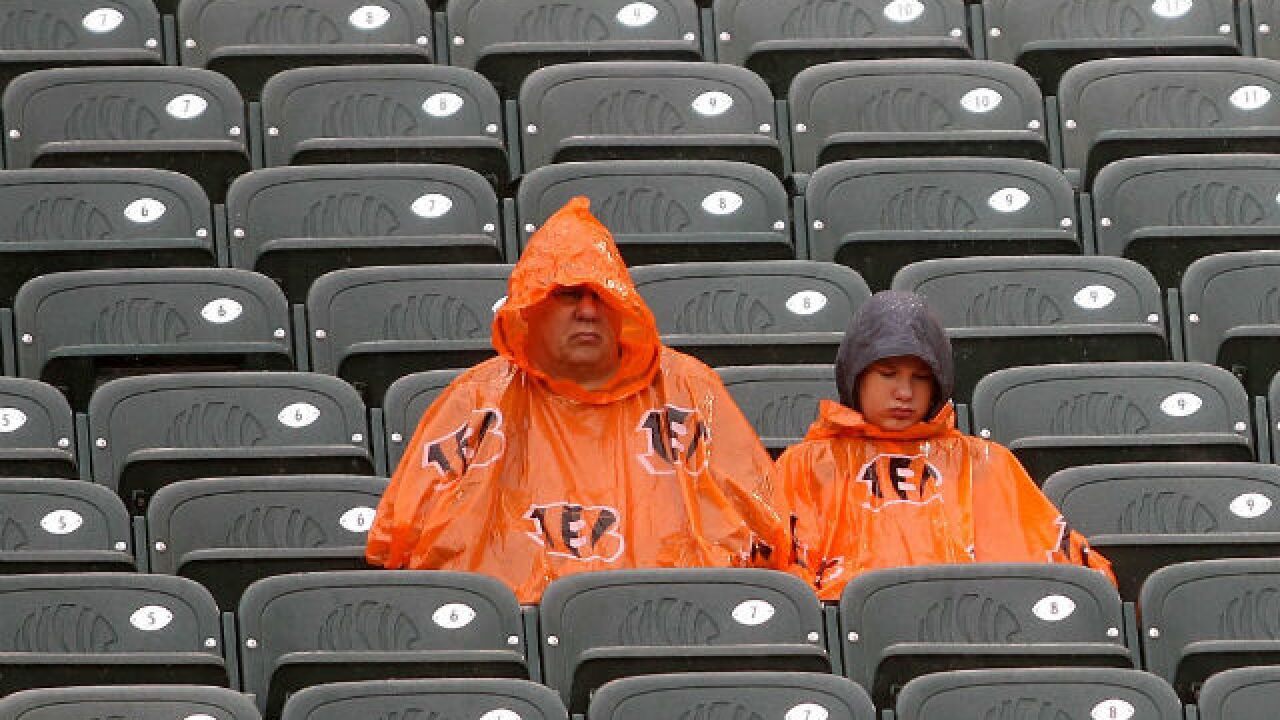 Image copyright 2017 Getty Images. All rights reserved. This material may not be published, broadcast, rewritten, or redistributed.
<p>CINCINNATI, OH - OCTOBER 8: Fans of the Cincinnati Bengals sit in the rain and watch warmups prior to the start of the game between the Cincinnati Bengals and the Buffalo Bills at Paul Brown Stadium on October 8, 2017 in Cincinnati, Ohio. (Photo by John Grieshop/Getty Images)</p>

CINCINNATI — Pardon Bengals fans if they find something better to do on Christmas Eve than to watch their floundering football team finish their home season at Paul Brown Stadium Sunday.

Think about it: What's to cheer for? Unless they come to boo.

"Very frustrating," defensive end Carlos Dunlap said about the 2017 season this week. "It's very demoralizing. But what are you going to do, quit or keep working at it?"

The Bengals (5-9) are a down-and-out team that barely showed up themselves for the past two games. They have been gutted by injuries and running on fumes, getting blown out 67-14 by the Vikings and Bears.

The good news is the defense has two starters back with linebacker Vontaze Burfict and cornerback Dre Kirkpatrick returning from concussion protocol, along with running back Joe Mixon.

The bad news is that offensive tackles Cedric Ogbuehi and Andre Smith are out.

And Marvin Lewis could be coaching his final game at PBS, adding to the distractions for the home team.

With the final game at Baltimore next Sunday, the Bengals are out of contention again with back-to-back losing records for the first time since 2007-08. A lot could change with Lewis finishing his contract and likely headed out following his 15th season in Cincinnati.

RELATED: Could Bengals go the way of post-Dusty Reds?

With the postseason still in their picture, the Detroit Lions (8-6) seem to have everything in their favor.

The Lions are tied with the Cowboys and Seahawks, one game behind the Falcons for final NFC wild-card berth. They need to win their last two games — they close at home against the eliminated Packers — to fulfill their part.

Whoever wins the game between the Cowboys and Seahawks on Sunday has to lose the following week. Atlanta has games left against New Orleans and Carolina. A lot has to break right for the Lions to get into the playoffs.

"They've overcome a lot of adversity over the year, and we've got a lot of football left to be played," coach Jim Caldwell said.

Some things to watch Sunday at Paul Brown Stadium:

LEWIS' FAREWELL? How will fans react to what's likely to be the coach's final home game at Paul Brown Stadium, which was the setting for some of his worst losses during his 15 seasons? Asked about it, Lewis said, "I have no idea."

FANS DISGUISED AS EMPTY SEATS?: Attendance for Sunday's game could be a season-low.  The  average home crowd is 54,026 fans this year, a drop of nearly 8,000 per game from two years ago.

WILL THEY EVEN TRY? The Bengals were going through the motions in the past two games, getting blown out by teams that were clearly more focused and energized. Coaches talked to the players following a 33-7 loss to the Bears, but that was followed by a 34-7 loss to the Vikings that wasn't any better.

"Complacency can set in, but that's what you have to fight at this point," quarterback Andy Dalton said.

STAFFORD'S SPREE: Matthew Stafford has completed more than 75 percent of his passes in the past three games, the first Lions quarterback with such a feat. In the past three games overall, he has completed 80 percent (85 of 106) of his throws. He'll be facing a depleted defense that got flattened by the Bears and the Vikings, but could be a little healthier this time around.

Stafford has made former Bengal Marvin Jones is go-to guy.  Jones leads the Lions with 970 yards receiving and eight touchdowns.

"I think our system and the system he came from in Cincinnati is quite a bit different, and he did a great job of adjusting, putting the work in," Stafford said. "And then, on Sundays he just goes out there and makes plays. I'm giving him chances on certain throws, and he's going up and making me right more often than not."

KINGS OF THE ROAD: The Lions have struggled at home, going only 3-4, but they're 5-2 on the road. A win over the Bengals would give them six road victories for the first time since 1961, when they went 6-0-1 for the club record.