Can John Ross keep up his preseason success? 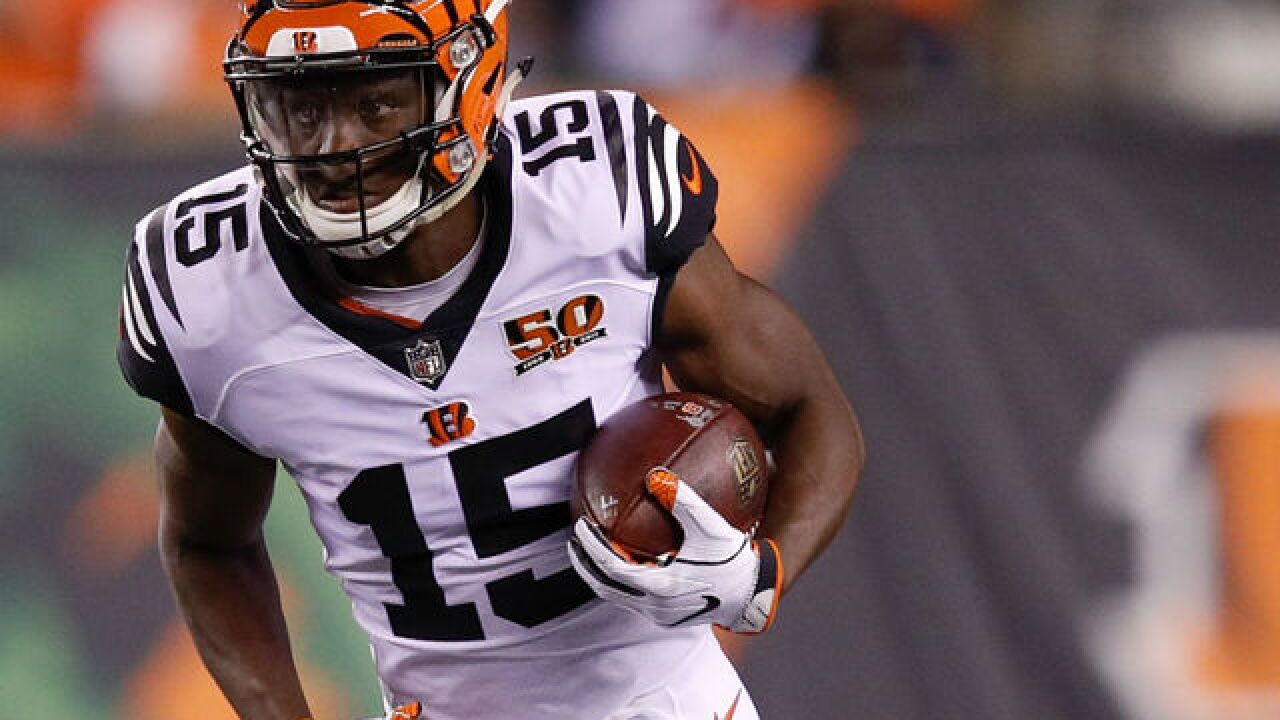 Image copyright 2017 Getty Images. All rights reserved. This material may not be published, broadcast, rewritten, or redistributed.
Joe Robbins | Getty Images
<p>Bengals wide receiver John Ross runs with the ball against the Houston Texans during the first half at Paul Brown Stadium on Sept. 14, 2017. Injuries limited his impact as a rookie but he feels confident this spring. (Joe Robbins/Getty Images)</p>

CINCINNATI -- A day after the Cincinnati Bengals dropped their first loss of the season, head coach Marvin Lewis had a chance to throw John Ross under a bus, figuratively speaking, and didn’t.

By Wednesday, he was joking about how Ross just needs to “free his mind.”

Perhaps, just maybe, Ross has earned a longer leash than a year ago when that wasn’t the case, but that will likely become clearer Sunday in how the Bengals (2-1) decide to use Ross at Atlanta (1-2).

Ross had a handful of mistakes in the team’s Week 3 loss at Carolina, most notably watching a deep ball slip through his hands in the first quarter and being the target on two interceptions that drew criticism because he didn’t seem to fight hard enough to make a play.

When asked Monday what Ross could have done better, Lewis had a much different response than after a similar scenario a year ago when Lewis said Ross let him down.

But Lewis didn’t make the loss about Ross. He even cut off a follow-up question in his Monday presser and said he wasn’t going to discuss it further.

On Wednesday, Lewis was in a much better mood overall. When asked how he’s seen Ross respond to Sunday’s mistakes, Lewis said with a laugh, “We haven’t seen a whole lot yet, but I expect John to ‘free his mind,’ to invoke the (En Vogue) song.”

Lewis then got up from his seat at the podium and ended the press conference with that but was still smiling.

Ross, the team’s 2017 first-round draft pick, seemed to be in Lewis’ doghouse last year after a slow start to his rookie campaign and before it became known the former University of Washington receiver was dealing with injury.

Lewis called Ross out in a press conference last November after a third-down play against Tennessee on which the receiver stopped running his route thinking Dalton wasn’t throwing to him. Dalton did, and the pass fell incomplete.

Ross never played another snap after that, and it wasn’t until a few weeks later Lewis revealed Ross had been trying to play through a shoulder injury he hid from the coaching staff.

The young receiver came back a different player this spring, looking more confident through offseason workouts, in training camp and the preseason and displaying the talent and speed that made him a first-round draft pick. He burned two Buffalo defenders on a 55-yard touchdown catch in the preseason, and his first NFL catch went for a touchdown on a nice 7-yard grab in the opener at Indianapolis.

“Consistency is what we needed to see from him in games, as far as his routes, his depths and his speed,” Lewis said of Ross after the opener. “I was pleased with that. He has to keep going out there and playing in the games, making sure he is in the right spots so he’s in position, based on the coverage, to have the opportunity to make the play. His touchdown was very effective, and those are the things he can do. He needs to continue to grow. That’s why he got to play more in the preseason – so he could feel comfortable being out there all the time.”

But, his snap count percentages have gone down every game since then. He played 66.1 percent of the snaps at Indy, then 59.2 percent against Baltimore in the home opener and just 47.7 percent Sunday at Carolina.

Cody Core replaced him on the final drive against the Panthers.

Fellow wide receivers A.J. Green and Tyler Boyd told reporters after the game that Ross just has to do a better job fighting for the ball, but both said he will learn from the mistakes.

“That’s something you’ve got to have, you’ve got to know,” Boyd said. “I can’t really say too much about it. I trust him. I believe in his game. I think he’s going to overcome this.”

“He’s just got to break the shell,” Boyd added. “That’s all it is. He’s got to stop worrying about all the other stuff and just play football. It’s going to come. That’s what I told him.”

However, that didn’t seem to be the case in the heat of the moment Sunday when a cameraman on the television broadcast caught him expressing his frustration. After Ross seemed to stop on his route on Dalton’s third interception, the camera zooms on Dalton on the sideline clearly appearing to say, “How can you stop?”

Dalton said in his press conference Wednesday that he and Ross talked about the miscommunication on the interceptions, and he was pleased with Ross’ response.