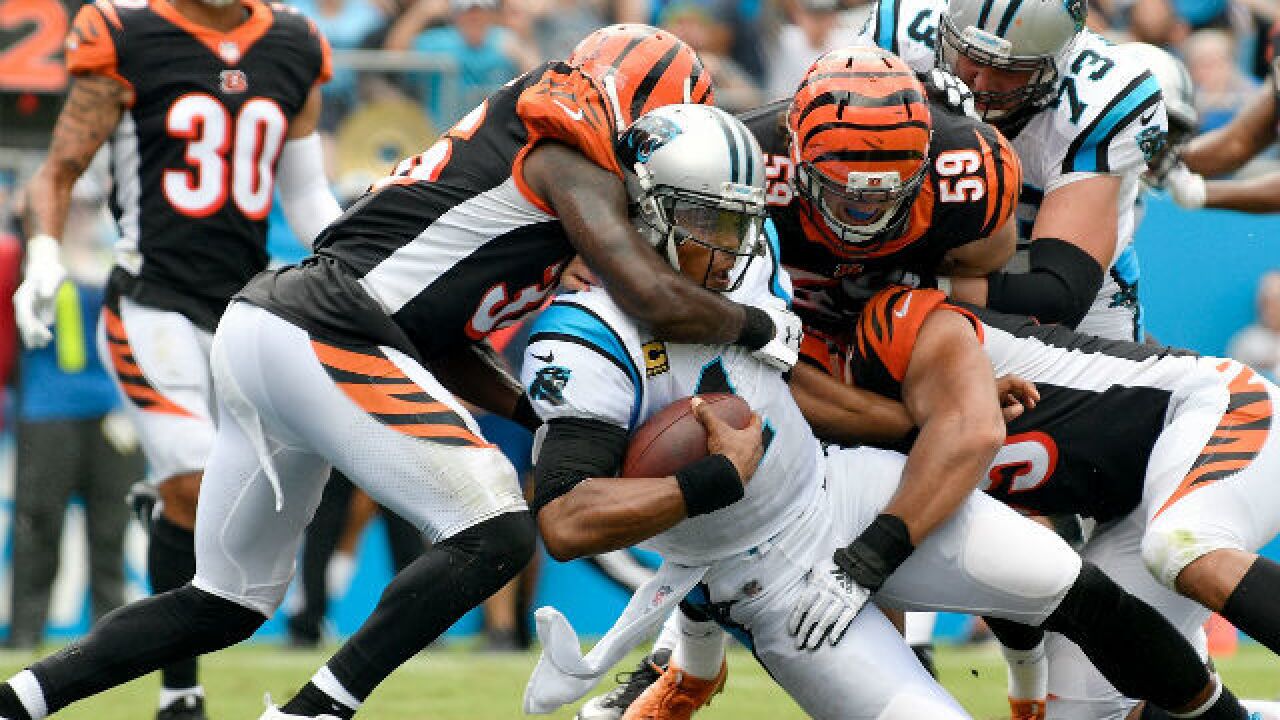 Image copyright 2018 Getty Images. All rights reserved. This material may not be published, broadcast, rewritten, or redistributed.
<p>CHARLOTTE, NC - SEPTEMBER 23: Cam Newton #1 of the Carolina Panthers pushes across the goal line for a touchdown against the Bengals at Bank of America Stadium on September 23, 2018 in Charlotte, North Carolina. (Photo by Grant Halverson/Getty Images)</p>

CHARLOTTE, N.C. – The Carolina Panthers turned two interceptions into touchdowns and handed the Bengals their first loss of the season 31-21 on Sunday.

Bengals QB Andy Dalton passed for 352 yards and two TDs, completing 29 of 46, but he also threw four interceptions - one on a Hail Mary on the last play of the game.

Meanwhile, the 1-2 punch of Carolina QB Cam Newton and RB Christian McCaffrey was more than the Bengals defense could handle.

Newton accounted for all four Panthers' TDs – two rushing and two passing. He completed 15 of 24 for 150 yards and rushed for 36 yards. McCaffrey, in his second year, had the biggest rushing game of his career, gaining 184 yards on 28 carries.

New offensive coordinator Norv Turner is using McCaffrey, who tied a franchise record with 14 receptions against Atlanta last week, in novel ways that give Newton options to run or pass.

"This is a different style of offense, the way they attack," Bengals coach Marvin Lewis said. "We have to adjust and morph and play in it and make sure we stay sound in it. You have to be good for the whole ballgame. There were times we were perfect and times we were not."

"We want to impose our will," said Newton, who praised Turner's play calling. "We are a team that can attack a defense in many different ways. As the game progresses, I see the body language of defenders and they are wearing down."

The Panthers, dominating the line of scrimmage, rushed for 230 yards and did not commit any turnovers.

The Bengals (2-1) lost WR A.J. Green to a groin injury in the third quarter. Green had five catches for 58 yards before leaving. After the game, Green told the media he was feeling good to go next week.

"At first, I thought I'd just knocked the air out of myself and just needed to catch my breath," Green said. "When I got up and running, I was pretty sore."

WR Tyler Boyd picked up the slack with six catches for 132 yards and a touchdown in the fourth quarter. TE Tyler Eifert had six catches for 74 yards. TE C.J. Uzomah caught a TD pass in the second quarter.

With RB Joe Mixon injured, the Bengals rushed only 13 times. RB Gio Bernard, subbing for Mixon, gained 61 yards on 12 carries and scored a first-quarter touchdown that gave the Bengals their only lead of the game at 7-0.

After Carolina tied it, Dalton was intercepted throwing deep to WR John Ross at the Carolina 33. Newton capped the ensuing drive with a 1-yard TD pass to WR Devin Funchess.

Carolina went up 28-14 in the third quarter on Newton's 5-yard TD run following another Dalton interception at the Bengals' 24. Carolina got a short field after Dalton's short pass for WR Josh Malone was picked off by DE Efe Obada.

The Bengals closed the gap to 28-21 when Dalton scrambled to his left and threw a nifty 27-yard TD pass to Boyd running along the back of the end zone.

But the Bengals didn't score again.

Rookie CB Donte Jackson had two interceptions for Carolina and Obada, the first player to make a 53-man roster from the recently formed NFL International Pathways Program, turned in a huge game in his first NFL appearance. In addition to his interception, Obada had a key fourth-quarter sack and two quarterback pressures on Dalton. One of his pressures was initially ruled sack-fumble in the second quarter, but later overturned by instant replay to an incomplete pass.

Bengals: Aside from Green, NT Ryan Glasgow was carted off the field in the fourth quarter with a lower right leg injury and did not return.

Panthers: LB  Luke Kuechly, the St. Xavier High grad, left  the game midway through the fourth quarter after getting dehydrated and returned after receiving an IV in the locker room. He intercepted Dalton's long pass on the last play.

Bengals: Visit the Falcons on Sunday.

Panthers: Have a bye next week, then host the Giants on Oct. 7.

SEE the game statistics and video on NFL.com.