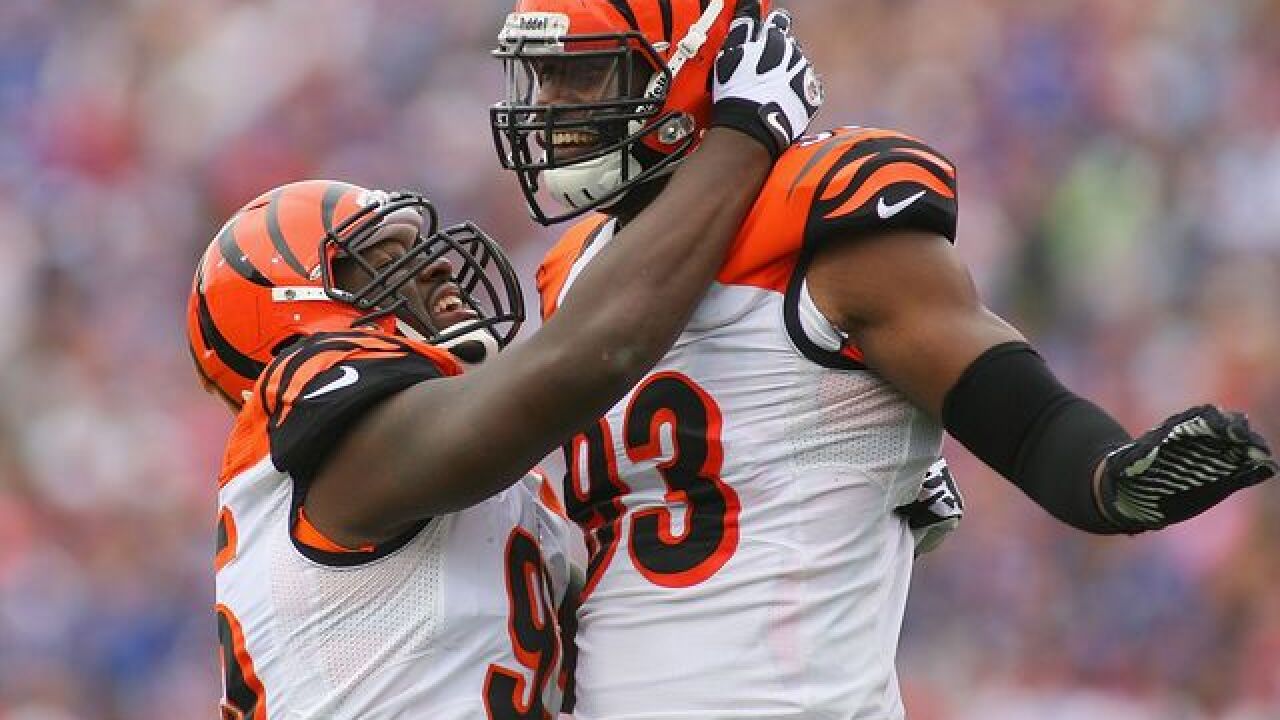 CINCINNATI - Michael Johnson is the kind of person you want on your football team - especially a team that has often been character-challenged.

But the Bengals said goodbye again – presumably for good – to the one-time defensive stalwart and fan favorite on Saturday.

The release of the nine-year defensive end reflects his salary, the emergence of young players on the defensive line and the aging process. That may be good for the team - inevitable, even - but it's still a shame, because the Bengals are losing a good man.

Johnson, 31, is the rare kind of NFL player who gave his Super Bowl tickets to police officers and donated school supplies to kids.  He always was a good citizen and role model.

Usually with no cameras in sight, Johnson devoted many hours to kids in the community and started the MJ90Foundation. He was the Bengals' 2017 nominee for the Walton Payton NFL Man of the Year Award.

Here's an example of the good work he did in the community from last month:

We couldn’t have provided school supplies to over 700 kids without the help from sponsors like @usbank , school supply donations from our teammates/coaches like @Marvin_Lewis_CF and the endless dedication of our volunteers! 🙏🏿#SundayFunDey #Back2School #BlessedToBeABlessing pic.twitter.com/2XlJ7XrGvq

Did I forget to mention he used to be a damn good defensive end?

Johnson played eight of his nine NFL seasons with the Bengals and used his long arms to knock down passes and wrap up opposing quarterbacks. His enthusiasm on the field was contagious. He went to Tampa Bay in free agency in 2014 but re-signed with the Bengals the next season.

Even coach Marvin Lewis, who doesn’t usually mourn the departure of players on cut-down day, paid his respects to Johnson.

"He’s one of those pillars that’s been here, given everything he can to this building,” Lewis said of Johnson.

The #Bengals released DL Michael Johnson, who had a cap hit of $6.1M. He saves roughly $4M with his release. https://t.co/0BGL8AItL2

Lewis shared that compliment with two others players released Saturday, H-back Ryan Hewitt and center T.J. Johnson. He said it was a difficult decision to let the three veterans go.

“Those are tough conversations to have, just like it was with Ryan Hewitt and T.J. Johnson, guys who gave everything they had," Lewis said.

The Bengals have been whittling away at salaries to help pay for the contract extensions they gave to DT Geno Atkins and DE Carlos Dunlap this week. Last month, they released six-year safety George Iloka and WR Brandon LaFell. They also dumped CB Adam "Pacman" Jones in the offseason.

RELATED: Bengals turning the spotlight on their youth.

As vested veterans, the two Johnsons and Hewitt are free to sign with another team or even re-sign with the Bengals.

The Bengals placed QB Matt Barkley (knee injury) on the Reserve/Injured list, making Jeff Driskel the backup QB assuming they don’t snatch a QB from another team’s cut list. But it won't be A.J. McCarron, A.J. Dalton's backup the past four years. The Bills traded him to the Raiders on Saturday.

Lewis didn't want to specify whether Barkley's injury in Thursday’s night final preseason season game factored into decision to give the backup QB job to Driskel or if Driskel had already done enough in an impressive preseason to win it.

The Bengals made 32 roster moves to get to the 53-player limit by 4 p.m. Saturday. More moves are possible before Sunday’s season opener at Indianapolis once  all NFL teams scan the others’ cut lists.

(Two of these players are waived/injured and will revert to the Bengals’ Reserve/Injured list Sunday if they clear waivers):

Placed one player on the Reserve/Suspended by Commissioner list:

Waived players are eligible to be signed to an NFL practice squad if they clear waivers Sunday.

The Bengals announced 10 members of their practice squad Sunday. Instead of the usual 10 players, the Bengals get to sign 11 players to the squad because of the inclusion of German TE Mortiz Bohringer, who is an International Player Pathway participant. One spot on the 11-man squad remains open.