After releasing George Iloka, Cincinnati Bengals appear to be turning the spotlight on their youth 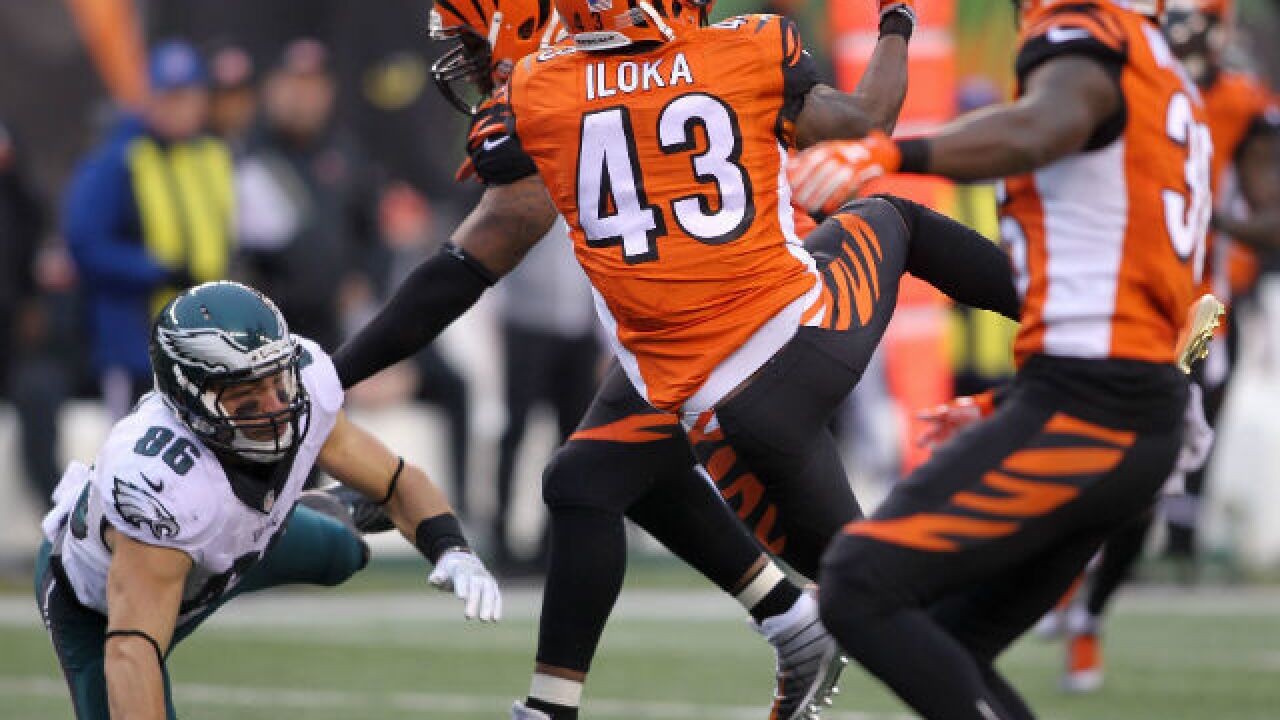 Image copyright 2018 Getty Images. All rights reserved. This material may not be published, broadcast, rewritten, or redistributed.
<p><span>CINCINNATI, OH - DECEMBER 4: George Iloka #43 of the Cincinnati Bengals breaks up a pass intended for Zach Ertz #86 of the Philadelphia Eagles, leading to an interception by Shawn Williams #36 of the Cincinnati Bengals during the fourth quarter at Paul Brown Stadium on December 4, 2016 in Cincinnati, Ohio. (Photo by John Grieshop/Getty Images)</span></p>

CINCINNATI -- When cornerback Dre Kirkpatrick came in as the Cincinnati Bengals’ first-round draft pick in 2012, he played behind a crew of veterans for three years.

Finally, in his fourth season, he earned a full-time starting spot that had opened with the departure of Terence Newman.

Now at age 28, Kirkpatrick is the oldest guy in the back end of the defense.

With the team terminating the contract of veteran safety George Iloka on Sunday and releasing wide receiver Brandon LaFell earlier in training camp, the Bengals appear to be turning the spotlight on their youth.

“We young, probably as young as we’ve been since I've been here,” Kirkpatrick said. “Since I've been here we were a lot older in the back end. But now we're younger and it's kind of crazy. Like I always say, I'm 28 and I'm the oldest in the room. That's never happened since I've been here, but for the most part I'm excited for the new role or whatever. Whatever comes with it, whatever I need to do to get guys going, I'm going to do it.”

A few weeks ago when the Bengals cut LaFell, it signified the team’s confidence in second-year player John Ross and third-year receiver Tyler Boyd as well as the potential for players like rookie Auden Tate to step in.

Iloka’s release seemingly makes room for rookie Jessie Bates, a second-round draft pick, to slide in at free safety. The Bengals haven’t started a rookie on defense to open the season since Rey Maualuga in 2009.

“I think first of training camp when I got thrown in with the (No.) 1s that's when that mindset kind of got thrown in at me,” Bates said. “Whether I was running with the ones or twos I have to act like an older guy. That's for anyone in this locker room. I think the expectation is very high for us.”

Bates wasn’t expecting to earn his opportunity from the departure of a player like Iloka, though. Iloka was like a coach on the field, Bates said, also noting the veteran played a big role in his transition to the NFL.

Now the leadership role falls on Kirkpatrick’s shoulders. He’s always been a vocal player, while Iloka was more of leader by example, but the duo – both from the 2012 draft class and locker mates – expected to take on more responsibility in bringing along the young players this season with Adam Jones not getting a contract extension.

Kirkpatrick looks forward to playing an even bigger role on defense this year but doesn’t feel like he’s the only voice now.

“You got Shawn (Williams), you got Darqueze (Dennard),” Kirkpatrick said. “Shawn’s been here just as long as I’ve been here. Shawn going into sixth year, Darqueze going into his fifth year. They are leaders in their own right. I’m just a little older. I’ve been here a little longer. End of the day those guys have a voice and have an opinion. That’s what it’s about, making the right decisions and leading guys in the right way.”

The average age of the roster has become significantly younger compared to a year ago.

The defense has young guys such as cornerback William Jackson III and defensive tackle Andrew Billings, who both missed their rookie seasons in 2016 and are expected to be starters their second year on the field. Second-year player Carl Lawson and rookie Sam Hubbard should contribute heavily at defensive end, and second-year linebacker Jordan Evans likely will start in place of Vontaze Burfict while he’s serving a four-game suspension to open the season.

RELATED: An inside look into Sam Hubbard's NFL preseason debut with the Bengals

On offense, rookie Billy Price is slotted to start at center, and 2017 second-round draft pick Joe Mixon is expected to be the go-to running back with Jeremy Hill gone.

Boyd and Ross are the No. 2 and 3 receivers behind 30-year-old A.J. Green, who is the oldest player in the receiver room with 31-year-old LaFell gone. Alex Erickson is in his third year and Josh Malone enters his second season.

“(The young guys) are making the competition much higher, making guys do great things, bringing out the best of everybody,” Boyd said. “That’s something I love being a part of.”

Kirkpatrick would have loved that kind of opportunity when he was starting out. He doesn’t mind the team’s shifted focus toward young players.