Bengals QB Andy Dalton thankful to earn starting job back: 'I knew God has a plan for me' 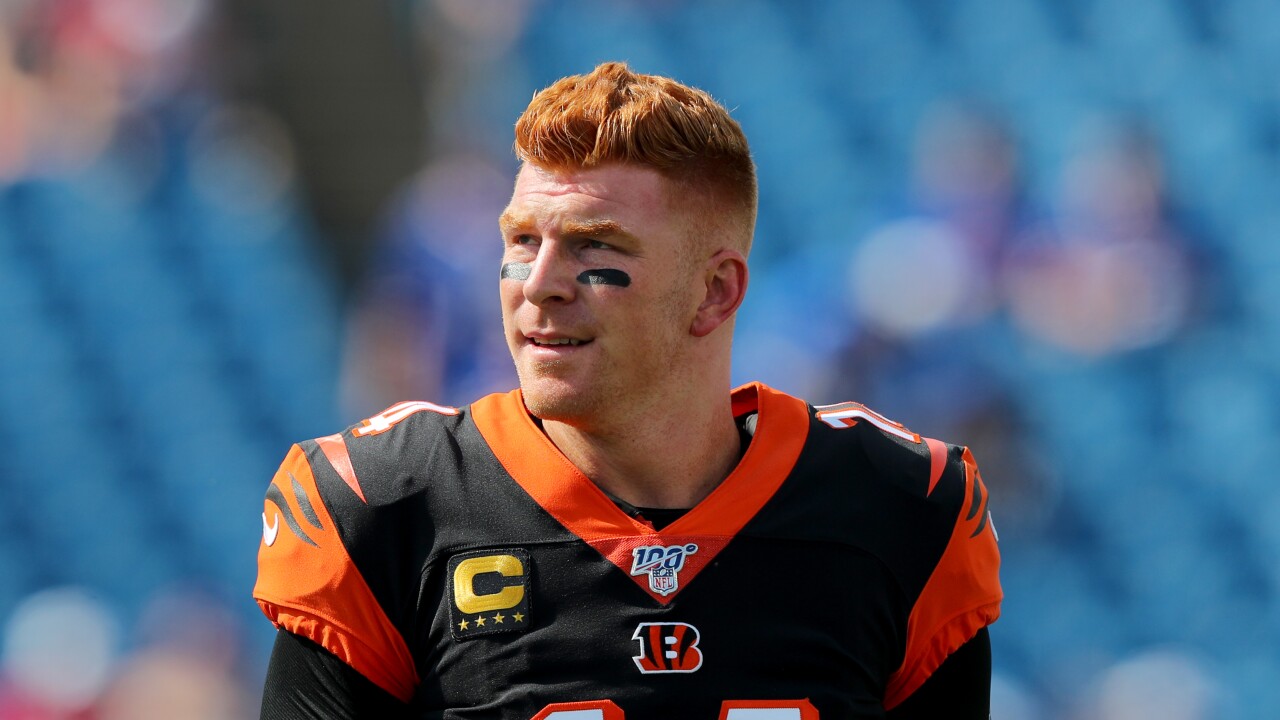 Timothy T Ludwig/Getty Images
ORCHARD PARK, NY - SEPTEMBER 22: Andy Dalton #14 of the Cincinnati Bengals on the field before a game against the Buffalo Bills at New Era Field on September 22, 2019 in Orchard Park, New York. (Photo by Timothy Ludwig/Getty Images)

CINCINNATI — Quarterback Andy Dalton wanted to be bitter when Cincinnati Bengals coach Zac Taylor benched him during the Week 9 bye to see if rookie Ryan Finley could reinvigorate the offense.

It took a day or two before he realized that wasn’t going to get him anywhere.

His swift attitude adjustment might have just paved the way to his return after three disappointing starts from Finley.

On Monday, Taylor tabbed Dalton the starter for this week’s game against the New York Jets (4-7), who have won three straight games and will bring the No. 8 defense in the league to Paul Brown Stadium on Sunday.

“I didn't know why it was happening, but I knew God has a plan for me,” Dalton said Wednesday in his first interview since earning his job back. “He has a plan for my family and my life, and I had to trust and believe in that. This is just part of my story and part of something I'm going to be able to relate to people on a different level now than I probably could have before. Initially it was tough, but I wasn't going to let the circumstance really get to me.

“At the end of the day, that's not who I want people to see me to be, and that's not my character,” he added. “That's not what God has called me to be.”

Dalton passed for 2,252 yards and nine touchdowns with eight interceptions while starting the first eight games, and he is one touchdown pass away from becoming the Bengals’ career leader in that category, sitting in a tie with Ken Anderson at 197.

Driving into work Monday, Dalton didn’t expect to find out he would get another chance to break the record. Taylor had told him the organization wanted to see what Finley could provide before the next draft, leaving Dalton to believe he might not start another game for the Bengals.

The Bengals traded up to take Finley early in the fourth round this spring, the highest they’ve drafted a quarterback since 2011, when they selected Dalton in the second round.

Finley completed just 41 of 87 of his passes (47.1%) for 474 yards and two touchdowns with two interceptions and also had three fumbles in his three games. All the while, Dalton remained engaged on the sidelines, encouraging Finley and his teammates, conversing with Taylor and the other coaches and serving as the scout team quarterback in practices.

Taylor said Finley still has a “bright future here,” but he believes Dalton gives him the best chance to win Sunday. He said he’s hoping not to have to make any more changes there the rest of the season.

“It's been tough,” Taylor said. “Both those guys … it's not an easy decision any time we've had to make it, which is twice this year, but it's in the best interest of the football team right now to do this and get Andy out there. We're going to face some good defenses these next couple weeks. We've seen a lot of challenges, and we feel like he's going to give us an opportunity to win the game.”

That message sat well with the players.

“Everybody just wants to win, so making the decision, making the change, doing whatever it takes to win is something that resonates heavily on our minds,” tight end C.J. Uzomah said.

“He's won a ton of games in this league, so you can't replace that experience,” said wide receiver Alex Erickson. “His leadership is very important. Even through the transition, his leadership was important, and now that he's back starting for us, it will carry over, too.”

Dalton still doesn’t know where he stands with the organization beyond these last five games, though. His contract runs through the 2020 season, but when the Bengals initially benched him on the day of the NFL trade deadline, he expressed interest in trying to find another landing spot if he’s not going to be part of the team’s plans.

For now, Dalton said that’s not his concern. Getting his job back allows him a chance to re-prove himself as a capable NFL starter.

“I feel like I've proven that throughout my career, and this is just another opportunity,” Dalton said. “To sit out for three weeks and then to come back in for these last five, my whole goal is to win, and I want to win every single game we play.”

Taylor and Dalton both noted the communication between them these last few weeks has remained strong, and there was no need to mend any fences.

Dalton said he understood what Taylor was doing when he made the decision to bench him, and although he didn’t agree with it, he learned from the experience.

“I've had several good backups here, and one thing that I've learned from having other guys be around is the backup needs to be so encouraging to the starter,” Dalton said. “I was trying to bring encouragement to Ryan the whole time, letting him know what I saw. I wasn't trying to overstep, I wasn't trying to do anything. When I felt like it was necessary to say things, I would do it. You get a different perspective of the game being on the sideline than being on the field, so there were several things I was able to take from it.”

The Bengals needed his perspective of the game on the field, though, especially with the Jets bringing safety Jamal Adams, who has 6.5 sacks, 10 quarterback hits and two forced fumbles over the last four games. New York’s defense allows just 321.1 yards per game.

The presumption is that Dalton is better-equipped to handle that kind of pressure. The New England Patriots also are coming up on the schedule Dec. 15.

“In general, having him here, having him around, having him in your ear, critiquing your routes and certain things and when you get a certain coverage, it's always helpful,” Uzomah said of Dalton. “He understands defenses as a whole. He understands the big picture of everything, so that definitely helps having his leadership.”