No trades before 4 p.m. deadline 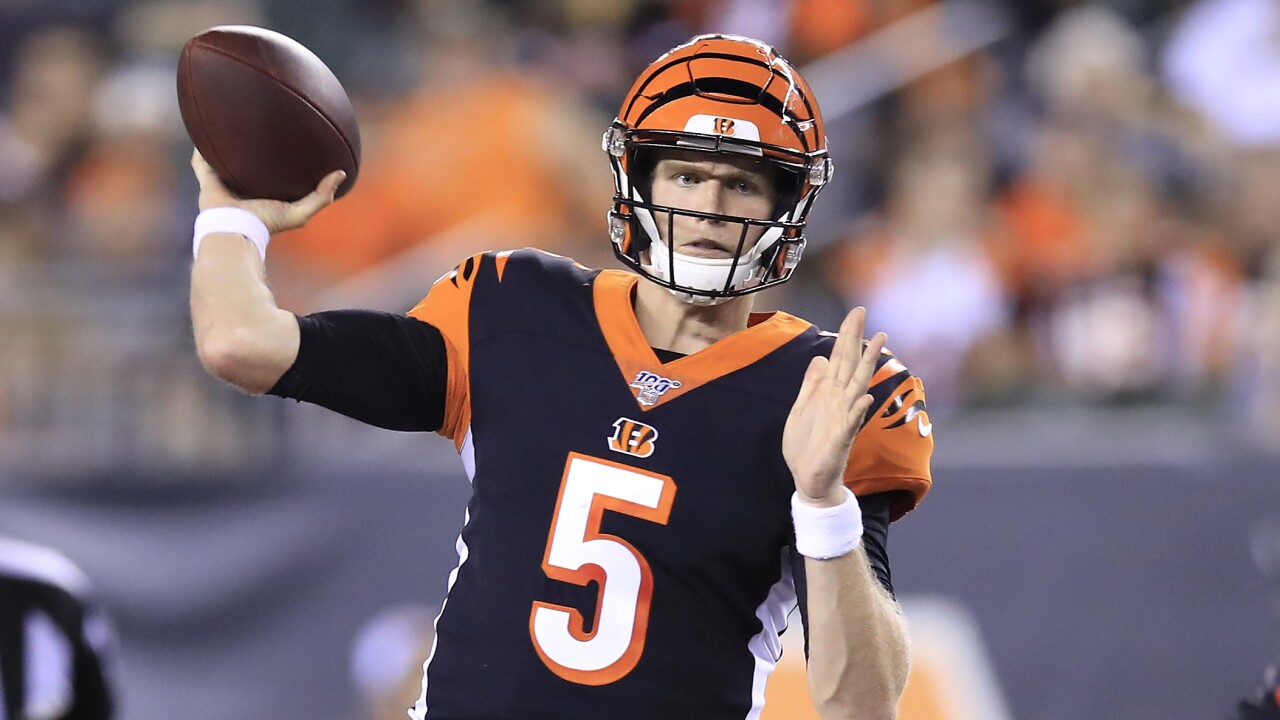 CINCINNATI — Cincinnati Bengals fans could be witnessing the end of the Andy Dalton Era after nine years.

The 0-8 Bengals didn’t make any moves ahead of the NFL trade deadline Tuesday afternoon, except an internal change: benching veteran quarterback Dalton in favor of rookie fourth-round pick Ryan Finley.

During a press conference held 90 minutes before the trade deadline, head coach Zac Taylor said he still believes the team has the right personnel to win games this season and his quarterback change has nothing to do with looking to the future.

“I don't want to speculate about 2020,” Taylor said. “We're trying to win games right now, and we feel like there's been enough talent to win some of the games we've lost. Just for a number of reasons we haven't done that. Our focus right now is on winning this next game and winning as best we can after that.”

Zac Taylor’s offense needs a playmaker at QB, since guys aren’t winning one on ones. We’ll see if Finley can be that. Good luck behind that O-Line though... https://t.co/21a212R9sO

The Bengals and Miami Dolphins are the only teams left without a win this season, but Taylor said the team still wants to win even if it means an impact on draft picks.

If the Bengals weren’t going to move any players for future draft picks or bring in outside reinforcements, benching Dalton is probably the biggest change Taylor could make.

Dalton, who turned 32 on Tuesday, threw for 329 yards and a touchdown without any turnovers Sunday in a loss to the Los Angeles Rams in London, following a three-interception outing the week prior. He leads the NFL in completions (204) and attempts (338) this season, and he is tied with Ken Anderson for the franchise career touchdown record at 197. Dalton has passed for 2,252 yards, nine touchdowns and eight interceptions through eight games this season, in his ninth year since he was drafted in the second round out of Texas Christian in 2011.

Meanwhile, Finley has yet to make a regular-season appearance. A fourth-round draft pick in April out of North Carolina State, he will make his NFL debut as the starter Nov. 10 at home against the Baltimore Ravens.

“It was not an easy decision to make,” Taylor said. “It was very hard. ... [Andy has] put his heart and soul into getting this thing right, and the hard thing now is when you're 0-8 and you make a quarterback switch, people tend to look at the quarterback and say he was the problem, and that's the furthest thing from the truth. He's done a lot of things to keep us going and he's invested a lot of time, effort and energy into getting us a win, and it hasn't happened. It's unfortunate because he's represented the organization the right way over the last nine years, and he's been everything you would have asked in that regard. ... Our objective now is to win this next game and as many games as we can after that.”

Taylor said the decision to bench Dalton does not indicate his time playing for the Bengals is over. Dalton’s contract ends after the 2020 season.

“I don't want to speculate about the future,” Taylor said. “We just need to see what Ryan can do and what he can provide for us. Since we drafted him, he showed well in training camp and his opportunities in the preseason games were very impressive, so we felt there's a talent there and you don't know what you've got until you see it live. That's where we're at right now.”

The quarterback position is one spot where the Bengals had a backup who hadn’t played through the 0-8 start. Taylor said he decided it was time to see what Finley could provide, especially with the bye week allowing him extra time to prepare.

Taylor said the team still could win games with Dalton, but Finley deserves a chance to show what he can do. After a rough start during the team’s offseason workout program, Finley turned a corner during training camp and was impressive in the preseason, completing 73.4 percent (47-of-64) of his passes for three touchdowns and one interception.

Dalton and Finley were told about the change individually Tuesday morning, and Taylor informed the rest of the team by position group – though A.J. Green also was told in person. Green was drafted with Dalton and is in the last year of his contract, but Taylor said he doesn’t think the change will impact whether Green still wants to play for the Bengals.

I talked to AJ one on one. One of the few I did. He understands. He respects my decision. Ready to rally around Ryan.

Defensive end Carlos Dunlap was surprised by the decision to bench Dalton, indicating it sent shockwaves through the locker room.

“For them to make a decision like that, that's a huge decision to sit down a nine-year starter and go with Ryan, get a look at him,” he said.

When asked if the team needed to look outside for help, Dunlap echoed Taylor’s sentiments there is enough talent in the locker room to be successful. The coaching change in the offseason was drastic, he said, and the team sent a message with the quarterback switch to show no job is safe.

“They've done a great job building a team to compete for championships,” Dunlap said. “We just haven't executed the best. We've had many teams where our third guy is a superstar on other teams. I think they've done a pretty good job of putting a team together because guys leave here and go be superstars on other teams and they're not a starter here, so that tells you a lot about what they're doing. But a sense of urgency now is a sense of urgency now. Right now, we're going to focus now and being present now.”

Tyler Boyd, who sits next to Andy Dalton in the #Bengals locker room, said everything seemed normal with Dalton when they first came in today so the news of his benching was unexpected.

Wide receiver Tyler Boyd said he respects the decision but doesn’t know yet what it means for the future.

“At the end of the day, it's tough to say because we are an 0-8 team,” Boyd said. “We're unfortunate. At the end of the day, a lot of guys have been shuffling around positions. Some people have been starting and some people haven't. It's just the quarterback is the big picture of it all and once you change a starting quarterback, it's like, 'Are you all walking away from him or are you just giving Ryan Finley a shot?' I believe he deserves a shot, but I don't know what route they are going to take. We just have to let it play out.”

Taylor’s hope is the change is a spark to turn things around for the final eight games, but safety Shawn Williams said he’s not sure if it will be enough.

“I guess we just have to re-evaluate how these next eight games go, going forward see if Ryan is going to be the answer,” Williams said. “At this point, what do you have to lose?”

The Bengals have lost the last 11 games Dalton has started going back to last season, and 13 of the last 14.

The second-round pick from TCU in 2011 quarterbacked the Bengals to the playoffs in his first five seasons, but the Bengals lost each time.

With little help from his team this year, Dalton was having his worst season statistically with his lowest total quarterback rating of 34.5 (his best was 70.0 in 2015).

With barely any protection from a poor offensive line, Dalton led the league in being sacked (29).

With the worst rushing attack in the NFL, the Bengals were forced to be a one-dimensional offense, and Dalton had the dubious distinction of leading the league in pass attempts (338) and completions (204). But without Green all season and John Ross since the fourth game, Dalton had few options and no deep threats.

The Bengals traded up six spots to select Finley in the fourth round. He spent three years at Boise State (including a redshirt year), graduated and transferred to N.C. State for his final three years of eligibility. He broke the N.C. State record for career completion percentage (.645) and finished third in ACC history with 18 career 300-yard passing games and 10,505 passing yards despite playing only three seasons.