Bengals need Andy Dalton to have a big year 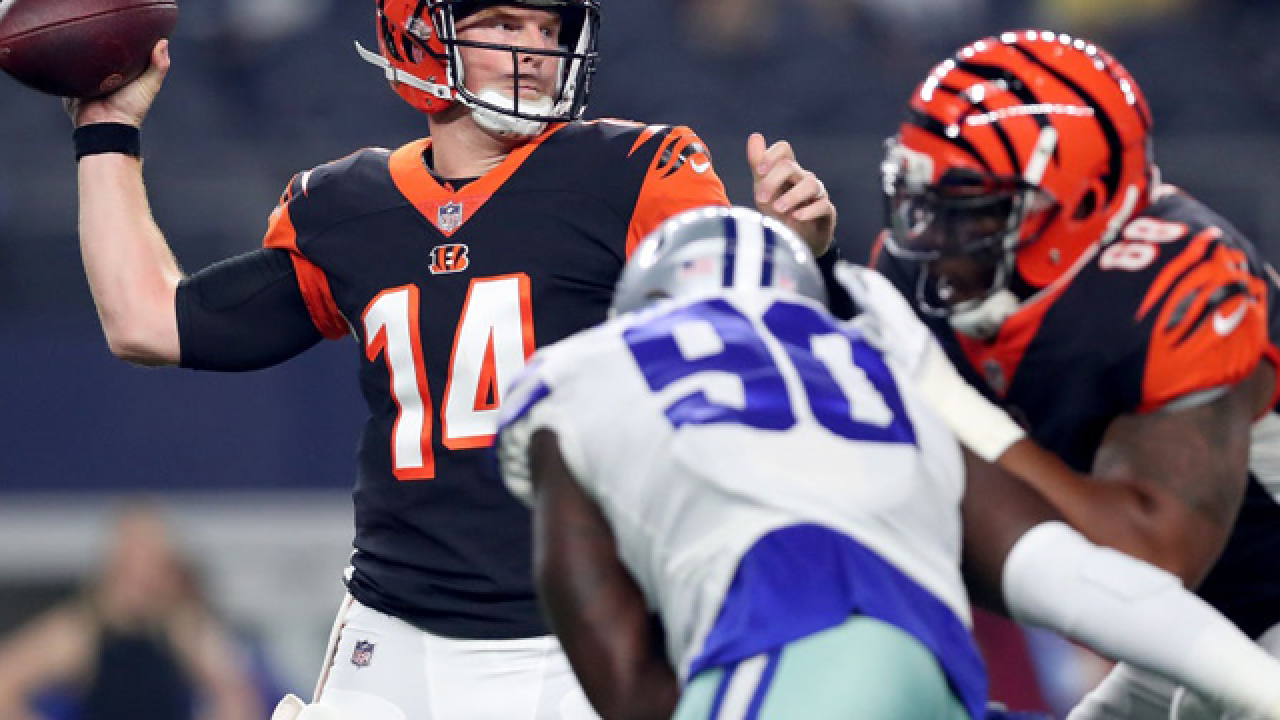 Copyright 2018 Scripps Media, Inc. All rights reserved. This material may not be published, broadcast, rewritten, or redistributed.
<p>ARLINGTON, TX - AUGUST 18: Andy Dalton #14 of the Cincinnati Bengals looks for an open receiver against the Dallas Cowboys in the first quarter at AT&T Stadium on August 18, 2018 in Arlington, Texas. (Photo by Tom Pennington/Getty Images)</p>

CINCINNATI -- Going into training camp, the common sentiment among Cincinnati Bengals coaches and front office personnel was the importance of Andy Dalton having a big year.

The start of a new season is almost always met with optimism, but during the team’s pre-camp media luncheon at the end of July, Bengals owner Mike Brown, director of player personnel Duke Tobin, head coach Marvin Lewis and offensive coordinator Bill Lazor all pointed to Dalton’s inability to connect on deep balls in 2017 as an area for improvement this year.

Now, almost six weeks later as Cincinnati heads into the season opener Sunday at Indianapolis, the expectations surrounding the veteran quarterback are filled with more hope than constructive criticism.
Dalton is coming off arguably his best preseason, and he’s got all the weapons in place that faced uncertainty entering camp.

“This offense can be very dynamic,” running back Joe Mixon said. “I really feel like we can be one of the very best (offenses) in the NFL because the talent we have is unbelievable.”

Entering the preseason, there were a lot of questions surrounding the offense that could greatly impact Dalton’s ability to make plays heading into his eighth season.

The offensive line was undergoing a rebuild under new position coach Frank Pollack, and while offseason acquisition Cordy Glenn appeared to be a solid upgrade at left tackle, the entire right side of the line was up for grabs. Add to that a rookie center in Billy Price, who was limited during offseason workouts and who struggled keeping snaps off the ground initially, and an oft-injured Tyler Eifert beginning camp on the Physically Unable to Perform list, and it didn’t look like a good situation for Dalton.

Then, shortly into the preseason, the team parted ways with veteran Brandon LaFell, leaving A.J. Green as the only receiver with more than three years of experience.

“The offense has a lot of moving parts, so it’s not just on Andy, but he’s a big part of it,” Lazor said.

Despite all the obstacles, Dalton came through the preseason with the passing game shining. He posted the second-best passer rating of any quarterback in the league at 130.9 (that number was a 67.4 last preseason) and had plenty of help from an offensive line that surprised while not giving up a sack with the first-team unit.

Dalton completed 22 of 31 passes for 324 yards and four touchdowns with one interception in three games.

“I felt really comfortable with the way that I played,” Dalton said Wednesday in his first press conference of the season. “There’s a couple things I wish I could have done a little bit better. Just with the way this offense has moved and the way we are doing things, I feel really good about where we are.”

The offense truly is in a different place than the end of last year and even just six weeks ago.

Aside from the offensive line standing up in pass protection, Tyler Eifert made it through the preseason healthy and is ready to go after appearing in just two games last year because of back and neck injuries. That alone should free up Green for more deep passes, as Eifert draws attention up the middle, but then there is the much-anticipated emergence of 2017 first-round draft pick John Ross.

RELATED:  Andy Dalton, John Ross give Bengals fans something to dream about

Ross, who struggled with the adjustment to the NFL and dealt with injuries last year, looked solid throughout offseason workouts but hadn’t yet proven himself against opposing defenses. He passed the test with a 57-yard catch-and-run touchdown at Buffalo in the third preseason game – a play that became the source of national headlines and buzz on social media.

“Having Eifert back to work the middle and John on the outside, it keeps everybody honest,” Green said of the challenges Ross and Eifert create for opposing defenses.

Third-year receiver Tyler Boyd also impressed in training camp, coming off a strong finish to 2017. He was limited to 10 games last year because of a knee injury but he ended the season with a game-winning 49-yard touchdown catch to beat Baltimore in the finale.

“With all the weapons we have and all the guys we can get the ball to, it makes it easier for all of us,” Ross said. “It's essential for (Dalton) for us to play at the best of our ability.”

Green has always been a reliable target for Dalton, and they have been among the most dynamic duos in the league since they joined the Bengals as first- and second-round draft picks in 2011.

However, with Eifert out most of last year, Ross not even on the field for more than 17 snaps and Boyd limited by injury, even more attention fell on Green. And it didn’t help Dalton that the offensive line was in shambles a year ago. By mid-December both starting tackles were out with injuries.

That’s why the focus this year has been on getting the deep ball back – and it actually seems possible.

“Last year deep balls weren't our best,” Green said. “Andy and I usually were one of the best in the NFL at that our first seven years, so we've got to get back to that, and that will help our offense out.”

The more weapons Dalton has in his arsenal, the more difficult the Bengals offense will be to defend.

Ross said having a quarterback like Dalton makes him and the other receivers better. He is constantly seeking feedback from Dalton and his pointers always prove helpful, but Dalton’s strengths as a passer, not just a leader, make the receivers’ jobs easier.

“It gives us a lot of confidence just how smart he is, how he can pick apart a defense and just see the whole field,” Ross said. “It makes everyone more confident in their own jobs because of how good he is at his.”

Dalton’s role as a leader takes on a new level of meaning this season, though.

At the roster cutdown on Saturday, Cincinnati had the youngest team in all the NFL with an average age of 25.1. Dalton and Green are the oldest players on offense at age 30, but that doesn’t scare Dalton.

It just means the future is brighter.

“It’s just about making sure guys are up to speed and guys are on the same page of what we are doing,” Dalton said of handling the youth of the offense. “I’ve seen all the stats saying we are the youngest team in the NFL and all that kind of stuff. We have a lot of guys that have played in a lot of games. For those young guys, they have good guys to look up to and see how they have done things. I feel like we have a special group here.”