Andy Dalton, John Ross give Bengals fans something to dream about 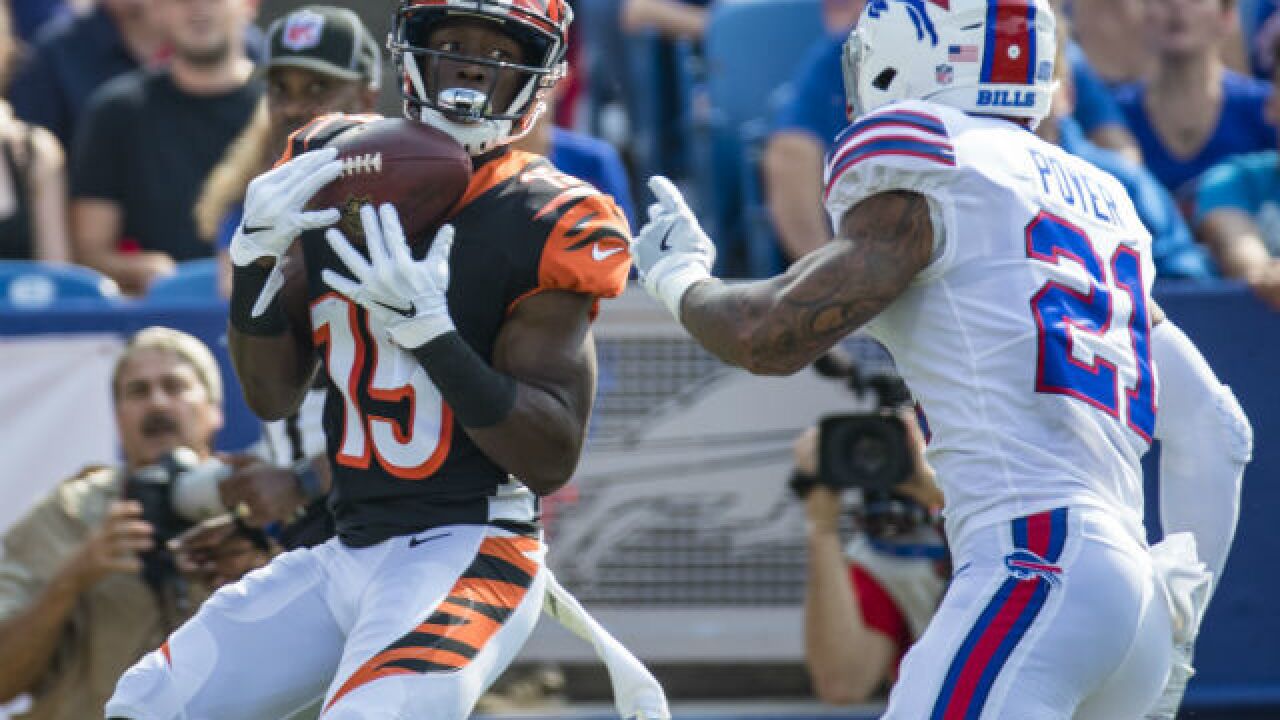 ORCHARD PARK, N.Y. (AP) —A first-play touchdown bomb from Andy Dalton to John Ross on Sunday must have given Bengals players and fans something to dream about.

The Bengals might go undefeated if they can repeat their first-half performance against the Bills once the regular-season starts in two weeks. Dalton threw two touchdown passes – including a 57-yard strike to Ross – as the Bengals built a 20-0 halftime lead en route to a 26-13 victory.

The speedy Ross beat safety Jordan Poyer and then avoided Vontae Davis' tackle to waltz into the end zone. It must have been just the way Bengals coaches had envisioned when they drafted Ross in the first round in 2017. A shoulder injury sidelined Ross for all but two games in his rookie year – he didn’t catch a single pass – so this was his first TD and play of any significance as a pro, preseason or not.

Dalton completed 11 of 16 attempts for 180 yards over five series and led the Bengals to three scores.

Dalton capped Cincinnati's third possession by hitting A.J. Green for a 14-yard touchdown with 4:32 left in the first quarter.

The defense overwhelmed Buffalo's starting offense and rookie quarterback Josh Allen. Linebacker Carl Lawson had 2½ of the Bengals’ five sacks in the first half.

The Bengals led 23-0 before the Bills mounted a comeback with two scores late in the third quarter. Nathan Peterman hit Jason Croom for a 17-yard touchdown, and then Travaris Cadet scored on a 1-yard run on a scoring drive set up by Rafael Bush intercepting Bengals backup Matt Barkley.

The Bengals improved their preseason record to 3-0, and Buffalo dropped to 1-2.

Allen took a step back in his bid to win a three-way competition and become the Bills' season-opening starter. Buffalo's first-round draft pick finished 6 of 12 for 34 yards passing, and was sacked five times for 39 yards in his first preseason start. Allen was also fortunate he wasn't intercepted on an underthrown pass intended for tight end Charles Clay up the right sideline.

Allen struggled behind a porous offensive line and displayed few signs of the progress he showed during his previous two outings overseeing the Bills' second- and third-stringers. Allen's day ended in the final minute of the first half, when he was escorted off the field to be evaluated for a possible concussion after being tackled by Carlos Dunlap in the end zone. Though Allen was cleared to return, he stayed on the sideline while Peterman finished the game.

Bengals tight end Tyler Eifert had one catch for 11 yards while targeted three times in making his preseason debut. The Bengals' 2013 first-round draft pick is coming off back surgery and was limited to playing just two games last year.

Bengals: Left tackle Cordy Glenn stood on the sideline, but did not return after hurting his right shoulder in the first quarter. Guard Christian Westerman (back) and running back Jarveon Williams (left knee) did not return.

Bills: Backup linebacker Julian Stanford did not return after hurting his nose in the first half. RB LeSean McCoy (hip/groin) and left tackle Dion Dawkins (hip) did not play after being injured in practice this week.

The Bengals stood together along the sideline except for  Dunlap, who stood on the field at the 45 with his hand on his chest. No member of the Bills appeared to protest.

Bills: At Chicago Bears on Thursday.