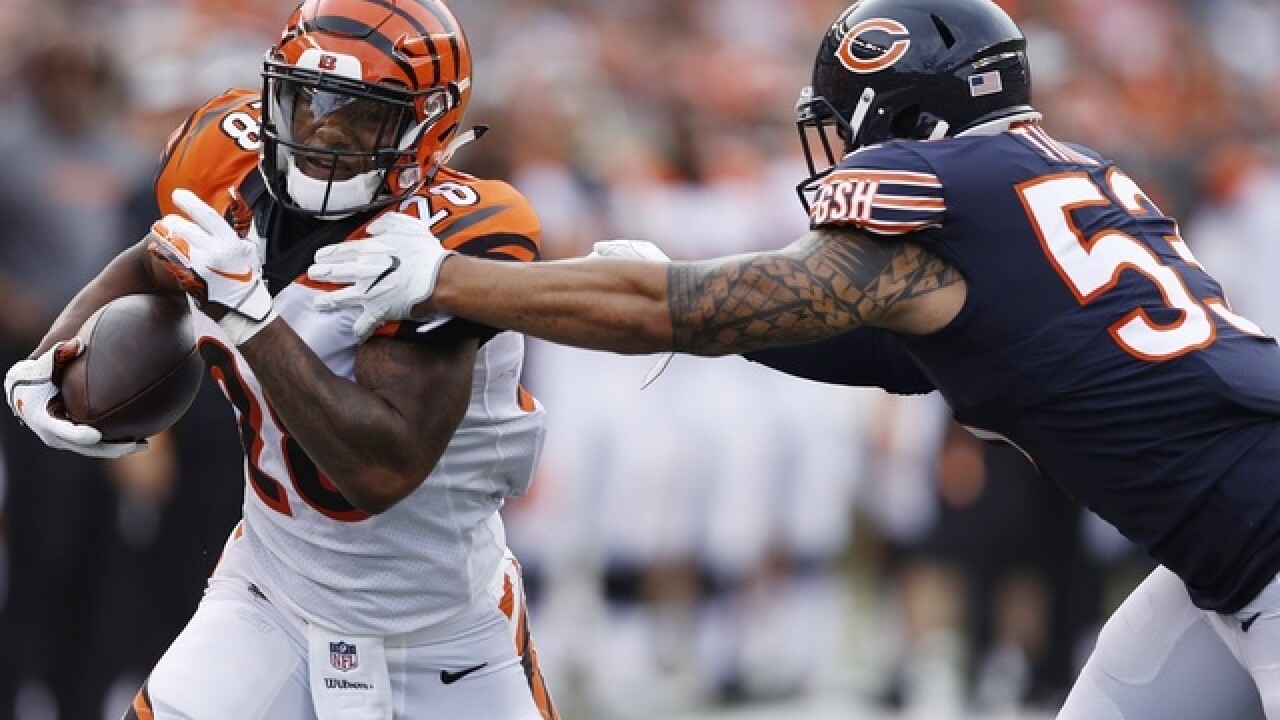 Image copyright 2018 Getty Images. All rights reserved. This material may not be published, broadcast, rewritten, or redistributed.
Joe Robbins
<p>CINCINNATI, OH - AUGUST 09: Joe Mixon #28 of the Cincinnati Bengals makes a move against John Timu #53 of the Chicago Bears on his way to a 24-yard touchdown reception in the first quarter of a preseason game at Paul Brown Stadium on August 9, 2018 in Cincinnati, Ohio. (Photo by Joe Robbins/Getty Images)</p>

CINCINNATI – Bill Lazor didn’t have time to make wholesale changes to the Cincinnati Bengals’ offense after being hired as coordinator in the third week of last year’s regular season. And while teams don’t often reach too deep into the playbook for a preseason opener, it was obvious Thursday night that Lazor is beginning to put his stamp on things.

“Bill’s a very smart guy,” wide receiver A.J. Green said. “Having an offseason under his belt really helped. (His) communication with all the receivers and all the players, asking what we need to work on, what we want to run. He’s a great players’ coach.”

In the first quarter of a 30-27 win over the Chicago Bears, the Bengals started with a two tight-end set, then went with three wides. Running back Joe Mixon featured in the passing game, and rookie John Ross had a catch and five targets. There was tempo and some variety as the Bengals amassed 139 total yards and nine first downs on their first three possessions.

“With the offense, I thought rhythm was good,” head coach Marvin Lewis said. “It’ll be interesting to look at where we were in the running game. We created a couple spaces in the second drive but nothing in the first touchdown drive, as much as we need to.”

On the second play from scrimmage, Dalton connected with Green on a crossing route for a 22-yard gain. Mixon then caught a short pass and broke two tackles, the last with a nifty spin move, en route to a 24-yard touchdown.

“That’s exactly how we want to start,” Green said.

Dalton was six of eight passing for 103 yards with two touchdowns and an interception for a 116.7 rating over his three possessions of work. Backup Matt Barkley took over in the second quarter.

The Bengals even faked a punt in the second quarter with Clayton Fejedelem taking the direct snap and sprinting 49 yards. It’s not something teams typically want to show in the preseason, but Lewis said they had the right look.

The biggest play of Thursday’s game came when receiver Auden Tate caught a 33-yard touchdown pass from quarterback Jeff Driskel with 2:04 left in the fourth quarter to seal the victory. Driskel finished 10 of 15 passing for 140 yards and a touchdown.

Preseason openers tend to be drab affairs, and only 35,633 people showed up on Thursday, a little more than 50 percent of the capacity of Paul Brown Stadium. But what they saw was a Bengals offense with some flair for a change.

Let’s face it: The Bengals weren’t a whole lot of fun to watch on offense last season. They averaged 18.1 points per game, which ranked 26th in the NFL. They gained 4.8 yards per pass completion for 28th in the league. They had only 34 plays longer than 20 yards, no runs longer than 25.

Lazor replaced Ken Zampese, who was fired after two games last year. Lazor didn’t have enough time to make wholesale changes, especially with tight end Tyler Eifert and first-round pick Ross hurt. There also was the issue of an offensive line that was in disarray and nearly a nonexistent running game.

The first quarter on Thursday offered some hope that this season could be different -- or at least more entertaining.

“We wanted to be efficient, kind of spread the ball around and get different guys involved, and we did that,” Dalton said. “We marched the ball right down the field twice. If we play like we can play, that’s what it’s going to look like.”

The Bengals acquired Glenn in a trade with the Buffalo Bills and drafted Price in the first round. While the team hasn’t given up on 2015 first-round pick Cedric Ogbuehi or second-rounder Jake Fisher, something had to change after Dalton was sacked 39 times last season as the team failed to establish a consistent rushing attack.

Ineffectiveness along the offensive line contributed to the Bengals’ lack of big plays, with Dalton averaging fewer than 7 yards per completion, his lowest mark since his rookie season.

There were no apparent issues upfront on Thursday.

“I was comfortable back there,” Dalton said. “I thought they did a good job. There weren’t any negative plays with it. Our guys upfront played well.”

The Bengals rushed for 144 yards and averaged 5.1 yards per carry on Thursday, which includes Fejedelum’s jaunt on the fake punt and a lot of yards gained against second- and third-team Bears defenders.

It was encouraging nonetheless for a team that managed just 3.6 yards per rushing attempt last season.

“The way we came out today was good,” Mixon said. “We were firing out. The first two quarters it was like, man, we’re rolling.”

Penalties and turnovers are something the Bengals are looking to reduce this season. On the Bears’ first possession, Bengals defensive end Carlos Dunlap negated a third-down stop when he hit Bears quarterback Mitchell Trubisky late.

Two key playmakers now are back in the mix for Lazor, and one returned to the field Thursday.

Eifert, who was cleared to practice on Monday, has appeared in 10 games combined over the past two seasons due to injuries. He will be eased back into action.

Ross, the Bengals’ first-round pick who missed most of his rookie season with injuries and didn’t catch a pass, fumbled his only touch last year on an end-around.

He had another adventure on Thursday night when he slipped making a cut, resulting in an interception by Bears corner Kyle Fuller, who returned it for a touchdown. Ross redeemed himself moments later with a 20-yard reception to set up Dalton’s 3-yard touchdown pass to Tyler Boyd.

“We never want the slip,” Dalton said. “Obviously that was unfortunate. But nobody flinched. That’s how you have to play this game. I came right back to him and he made a couple guys miss. He’s a special player. He’s going to make a lot of plays for this offense.”

The Bengals finished 7-9 last season and missed the playoffs for the second straight season. Several changes were made on the coaching staff, but Marvin Lewis returned for a 16th season. It’s still a work in progress. Thursday was only the start.

“I think everybody understands what we were trying to do,” Dalton said. “We didn’t have a ton of offense. That’s how these preseason games go, there’s not a whole lot of game-planning going into it. But everybody was on the same page and it showed.”