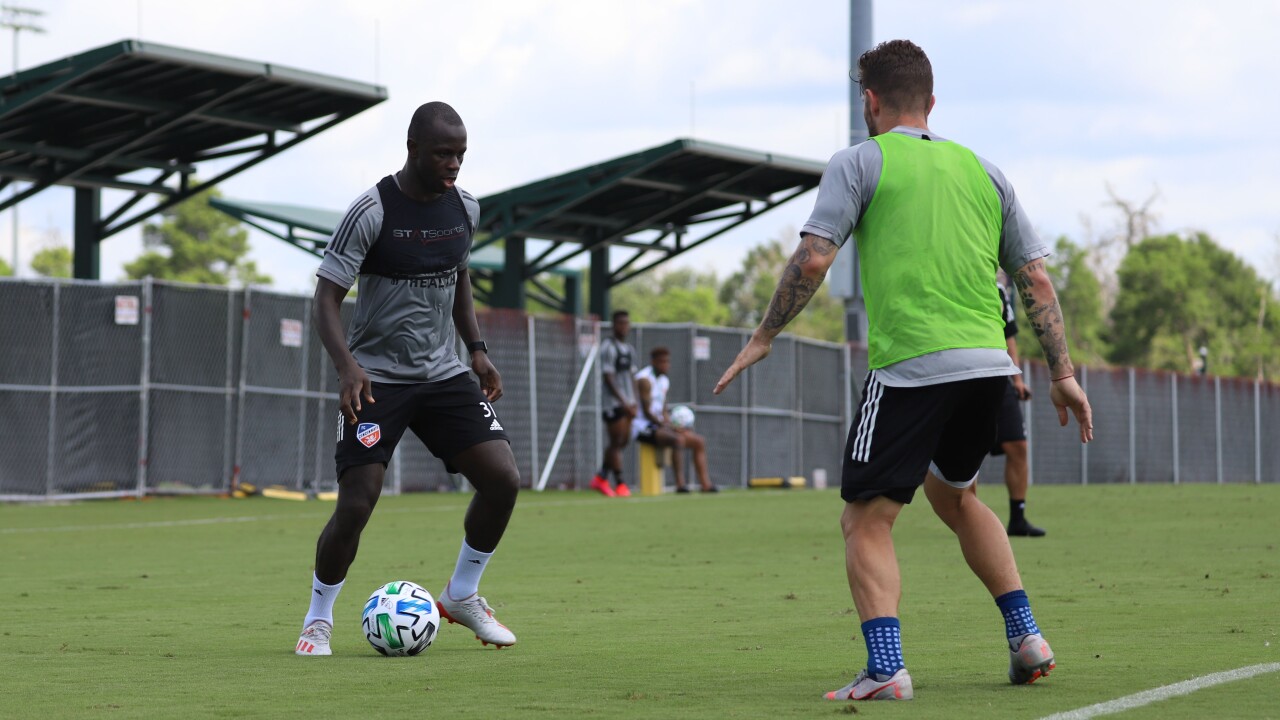 CINCINNATI — FC Cincinnati is investing $250,000 into the Black community and has issued a statement condemning racism. But some players say the team needs to do more to reach out to Black players and that the club should have done more to address the players sooner.

The club drew public attention in February when then-coach Ron Jans used a racial slur in the locker room and agreed to resign after a player complaint led the league to launch an investigation.

Players now say they were disappointed FC Cincinnati didn’t do more to support them during that time, waiting until June 26 to discuss racial issues during a team meeting at Mercy Health Training Center.

“I think the meeting was overdue,” Gambian winger Kekuta Manneh said. “We should have had that meeting a while ago. But nothing is too late. You know it's something that's ongoing.”

Behind the scenes, FC Cincinnati was working toward its June 30 announcement: Investors were committing at least $250,000 to local community organizations working to support the Black community.

Manneh said the club told players about its plans for the financial commitment during the team meeting and said he felt the conversation was productive, although it should’ve happened “a while back.” Two outside diversity and inclusion-training professionals also led an engaging discussion during that meeting, Manneh told WCPO.

However, midfielder Fatai Alashe expressed skepticism of the club’s intent during a roundtable discussion on the Backyard Footy podcast featuring Black players from MLS and the United Soccer League. In the podcast episode recorded June 25, one day before the team meeting, he discussed the front office’s handling of the Jans incident.

"I think our club has been really bad, to be honest,” Alashe said on the podcast. “I've been super disappointed. … We had our (former) coach saying the N word in the locker room and sh*t, and it just kind of, like, got brushed under the rug, and they let him resign. So, we had fans that were blowing us up like 'N----- this,' 'N----- that,' calling us all types of sh*t as though we did something wrong in that situation and the club did nothing to really back us. … So then, now that all this has happened, our club put out a super-generic two-sentence statement (on social media), and I don't know. I just felt like it was almost a piss on us.”

Alashe declined an interview request; however, in a private message on Instagram to WCPO, he said that he stands by his comments on the podcast.

FC Cincinnati center back Kendall Waston commented in February on the attacks players were receiving, but there was no public display of action or support from the team until the national conversation about racial injustice heated up following the death of George Floyd in Minneapolis police custody. Waston was not made available for an interview, despite multiple attempts to reach him.

FC Cincinnati posted a statement on social media May 31, saying the club “opposes racism and prejudice” and noting it was adding its “collective voice for a better world, and to ensure social justice and equality for all.”

FC Cincinnati president Jeff Berding declined an interview request. Asked if the club would be addressing Alashe’s comments, a team spokesperson directed WCPO to Berding’s comments in a press release about the financial commitment.

“Since our initial club statement opposing racism, we have been talking with and listening to our partners, players and staff about a stronger response that includes a plan of action,” Berding said as part of his statements in the press release. “We believe that we must all be vigilant in working to address systemic racism that unfortunately exists within our country and local community.

“We have the utmost appreciation and respect for every player, team staff member and front-office employee, and we are committed to continue showing that respect through action.”

Berding also noted in the press release that it had just come to his attention that players have endured personal and racial attacks on social media.

Backyard Footy podcast host Hugh Roberts, a defender for USL Championship side Charlotte Independence, told WCPO that Black soccer players in America would feel better heard by their clubs if there were more Black executives and team employees.

Roberts has been discussing the topic with players around MLS and the USL, such as Alashe and FC Cincinnati winger Joe Gyau, during a “Black Lives Matter” series on his podcast. Gyau also declined an interview request through a club spokesperson.

“We all discussed our views, and it was all kind of similar in the sense where clubs send out a statement and then say to us, 'We're here for you,' but then that's that, the job is done, when it's not,” Roberts said. “We still continue to fight these issues.

“When the statements came out, they were all saying kind of the same thing, and clubs were like, 'OK, let's donate money, because other teams did.' I think they definitely need to be more creative, and they need to get more involved in the community. There are so many ways to get involved. It's something as simple as having communication with us, really show that you're listening.

“Like Fatai said, he hadn't really heard from the front office at all and there were things going on behind the scenes. It just shows they don't know what's going on in their own locker room.”

Manneh said “everyone could do more” to educate and to address racial disparities, but he felt FC Cincinnati was taking steps in the right direction with its recent actions, which also included banning a fan who tweeted that Gyau and Alashe should start their own segregated league if they are unhappy.

“Taking that step (donating money and backing players) was massive for the club and for individuals in the club,” Manneh said. “For people like us, African Americans, seeing that the club is actually taking it seriously and doing something about it, and educating people within the club that might not have been exposed to African American history, … I think they took a really positive step toward that.

“But it's all about actions. I think we all see that they are fighting and they're willing to protect the integrity of the club and the players that are in the club that are affected by everything going on in so many different ways.”

MLS has been pushing for more action and made a powerful statement during the pre-game ceremony to the MLS Is Back tournament opener last week. More than 100 Black players from MLS teams lined up around the field wearing Black Lives Matter shirts and stood with their fists raised for eight minutes, 46 seconds, the amount of time former Minneapolis police officer Derek Chauvin held his knee on George Floyd’s neck. The league’s Black Players for Change coalition, which was founded on Juneteenth, organized the demonstration, and seven FC Cincinnati players participated, including Alashe, Gyau, Waston, Manneh, forward Jurgen Locadia and defenders Zico Bailey and Saad Abdul-Salaam.

MLS also added a patch to the back of jerseys and encouraged teams to have players write messages of support or names of individuals they would like to recognize during this time. Several Cincinnati players wrote messages like “Black Lives Matter” and the names of Black individuals who had been killed by police, such as Floyd, Breonna Taylor and Sam DuBose.

Goalkeeper Spencer Richey, a white player who has long used his platform to push for equality for the Black and LBGTQ communities, said he felt FC Cincinnati was taking positive steps but hopes to see more.

“We obviously dealt with the Ron Jans situation in the preseason, which was unfortunate, but I think with that brings the opportunity for growth, both internally as well as the impact the club can have in the community,” Richey said. “We as players, and certainly the front office and the club, can see this opportunity that hopefully FCC can continue to sort of bring together the Black community, the white community, the brown community, everyone.

“We have a pretty cool platform as athletes to be able to use. And, you know, I'm certainly someone that takes a lot of pride in wanting to use my own so, yeah, it's definitely a step in the right direction and it's something that we can't take our foot off the gas. We've got to take this momentum and turn it into real change.”