FC Cincinnati coach was lying about his reason for ouster, according to club, players association 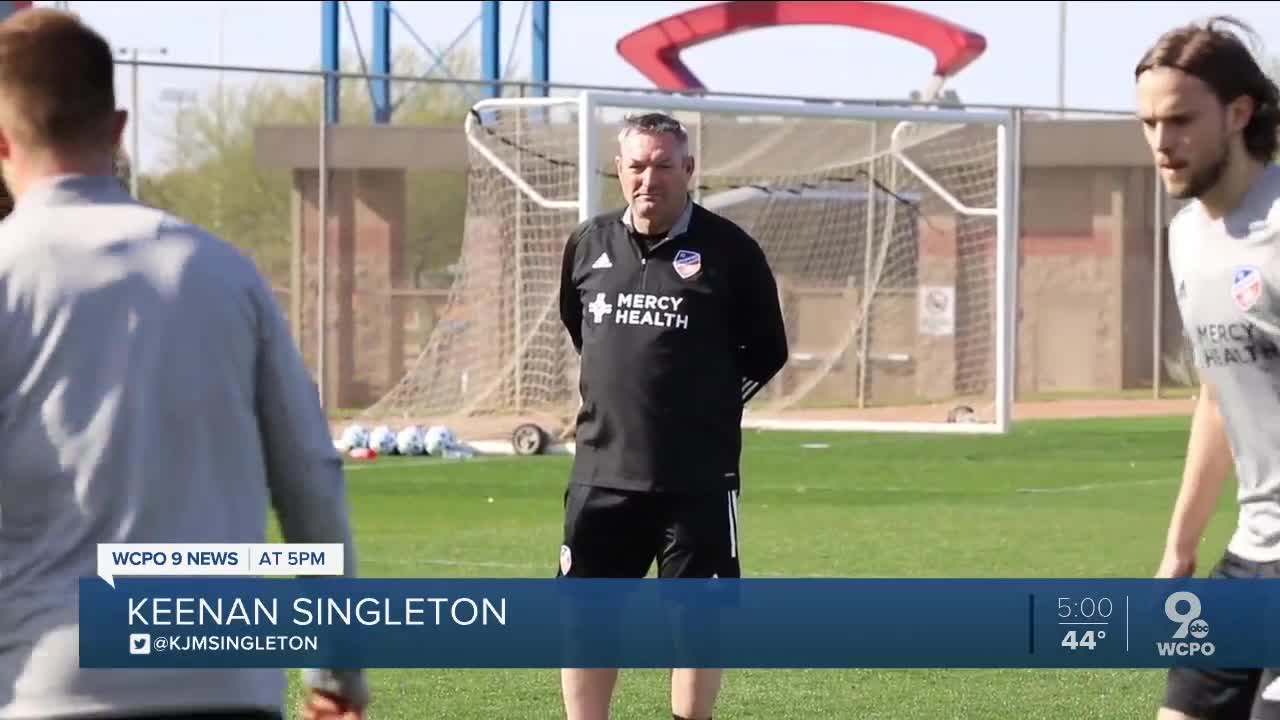 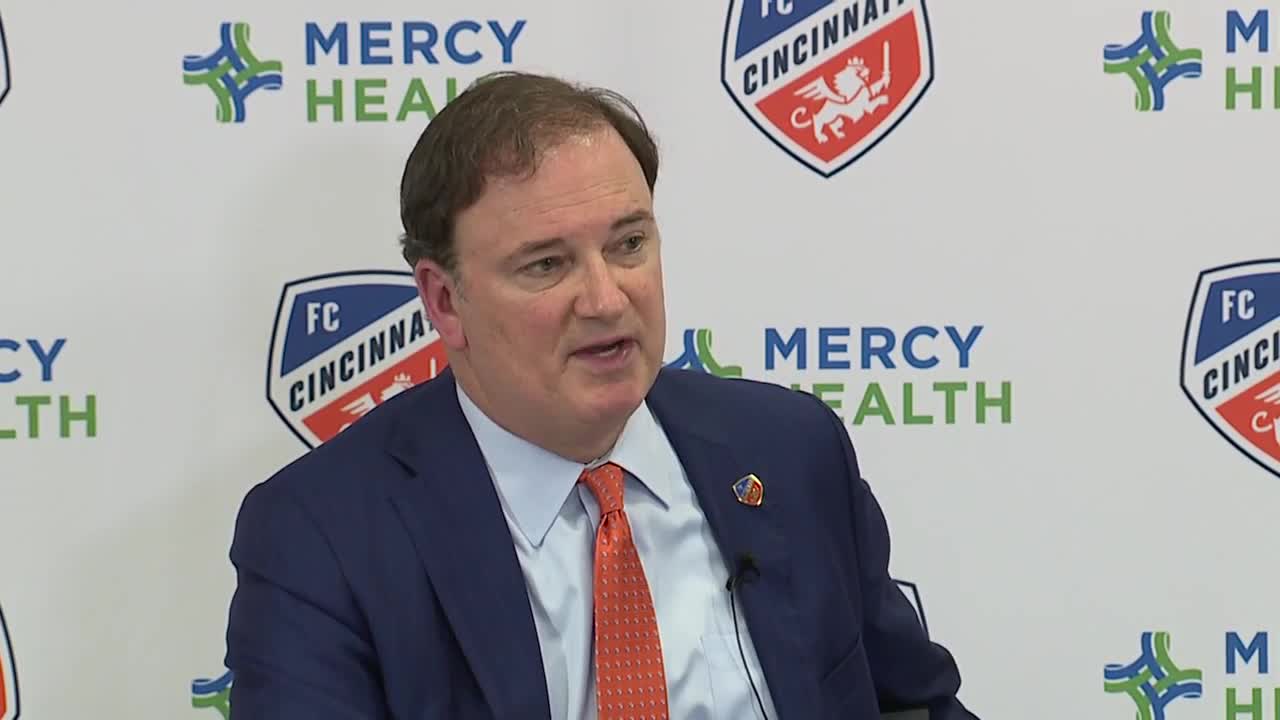 CINCINNATI — FC Cincinnati President Jeff Berding says Ron Jans was guilty of more anti-cultural behavior than using a racial slur while singing a rap song that led to a league investigation and the coach's ouster.

"This was not a single incident," Berding said at a Tuesday afternoon news conference where he said that the club had fired Jans Monday afternoon. Berding said a weekend investigation and interviews with Jans and players determined Jans' behavior included "broader-themed experiences that were inappropriate and offensive.

"It was alarming. It was not acceptable," Berding said.

The executive director of the Major League Soccer Players Association, Bob Foose, said in a statement that "there is absolutely no place for racism or intolerance of any form in MLS."

Foose also contradicted Jans' claim and said Jans' and other false narratives were "clear attempts to manipulate the truth and intimidate those who call out unacceptable behavior.

"It is our sincere hope that FC Cincinnati will learn from and address these mistakes, and begin to chart a new course forward, one that includes treating all of its players, current and former, with fairness and respect," Foose said.

“We place the utmost importance on a strong culture within our club, beginning in the locker room, and every person connected with FC Cincinnati, that they feel valued, respected and trusted," Berding said.

Berding said the club interviewed players in secret and guaranteed their confidentiality, so the club would not reveal any specific details of the investigation publicly or within the club.

Jans told WCPO he resigned Sunday night, but Berding contradicted him. Berding said once he read a partial report of the investigation Monday, which included players' statements, he and General Manager Gerald Nijkamp agreed that Jans could not return. Berding said Nijkamp met with Jans late Monday afternoon "and explained the situation."

When asked for comment on the MLSPA’s statement, Jans texted: “I don’t see myself as a liar and a manipulator. I see that everything is turning against me and see it’s difficult to win this fight.”

Berding said FC Cincinnati became aware last Thursday of a complaint filed to the Major League Soccer Players Association, and Jans confirmed he had used an inappropriate racial slur in front of players during preseason training in Arizona a few weeks ago. The 61-year-old Dutchman explained to WCPO 9 he was trying to mold into the American culture by learning hip-hop and his use of a racial slur was a misunderstanding.

“Sometimes you say things without bad intentions and people misunderstand,” Jans said. “I don’t feel guilty. I just feel bad for the club because this is a bad period for everyone and the club and me too.

“Maybe feelings were hurt and I apologize for that,” Jans added. “It wasn’t my intention. I learned from it. It was never addressed (directly) to someone. It was maybe more showing I also like hip-hop music and know the culture and want to be part of it, but because of my color I am not part of it.”

The complaint to the MLSPA led to a league investigation, and FC Cincinnati removed Jans from his coaching duties until the investigation could be completed.

Throughout the weekend, Jans defended himself to Dutch media in his native country, saying he was singing along with a song.

Berding said FC Cincinnati was not aware of players’ concerns until last week, and moving forward the club will do a better job of making sure players feel comfortable sharing their concerns. Berding confirmed the original complaint also included something related to a speech Jans made while on a trip to play D.C. United in the 2019 finale on Oct. 6.

FCC club president Jeff Berding: I don’t have an explanation for why the players cane forward sooner. I appreciate that the players and the players association did come forward. We can get better from discussing these issues. @WCPO

Jans said he spoke to players Nick Hagglund and Kendall Waston at the time of the locker-room incident and thought everything had been sorted out among them. He is not sure who or how many people filed the complaint or still have an issue with him, which led him to believe he could not remain the coach.

Some other themes also emerged during the investigation, Berding said, and Jans said some of the questions he faced brought into light that perhaps he didn’t fit into the culture here as well as he thought.

“I didn’t feel like I could be myself again because there were a lot of questions they were asking that I felt were normal things,” Jans said. “Everyone knows I’m not into discrimination and racism. I want to help fight against it. I’m just sorry that it came to this, and I am sorry for the club because I see a lot of potential for success this season, and I hope that doesn’t change.”

Jans said he is disappointed it didn’t work out for him with FC Cincinnati, but it’s best he return home to The Netherlands.

“I had some terrible last days,” Jans said. “It’s a pity it ends this way. The fans were always so positive and Carl (Lindner) and Jeff (Berding) were very kind to me. Even if I could fight it and win it, I think it’s never like it was before. The environment is so damaged by everything that happened and not everyone is on the same page. What came out of this is so huge it’s better to go home and feel free.”

Jans had been preaching the need for a positive culture since he arrived in Cincinnati in August, 2019, after Alan Koch was fired 11 matches into the season because of what Berding called “cultural issues within the locker room.”

Speaking at the news conference, Nijkamp suggested that Jans is not a bad person but one who was out of his element in the U.S.

Nijkamp said Ron Jans is a very transparent person and in the Netherlands he is more aware of his audience. Nijkamp is surprised by what transpired but fully agrees it's unacceptable. #FCCincy

Berding alluded to that when he talked about starting a search for new coach.

"Obviously, as Gerald begins the search for a new coach, we've learned that a greater awareness to cultural norms and standards here in the U.S. is going to be enormously important," Berding said. "And certainly our values need to be protected, need to be served.

"I will offer that the feedback we hear is that we've come along way since last year."

Assistant Yoann Damet, who served as an interim coach between Koch and Jans last year, will return to that role until a permanent replacement is found.

FC Cincinnati, which is less than two weeks away from the start of the regular season March 1 at the New York Red Bulls, is now searching for its fourth permanent coach since 2017.

"Racial and cultural diversity is a major part of what makes the game of soccer so special, and we place the highest priority on respecting every person involved in our game," Berding said in a statement released earlier Monday. "This includes absolutely everyone associated with our club, from our locker room and front office, all the way through to our fans.”