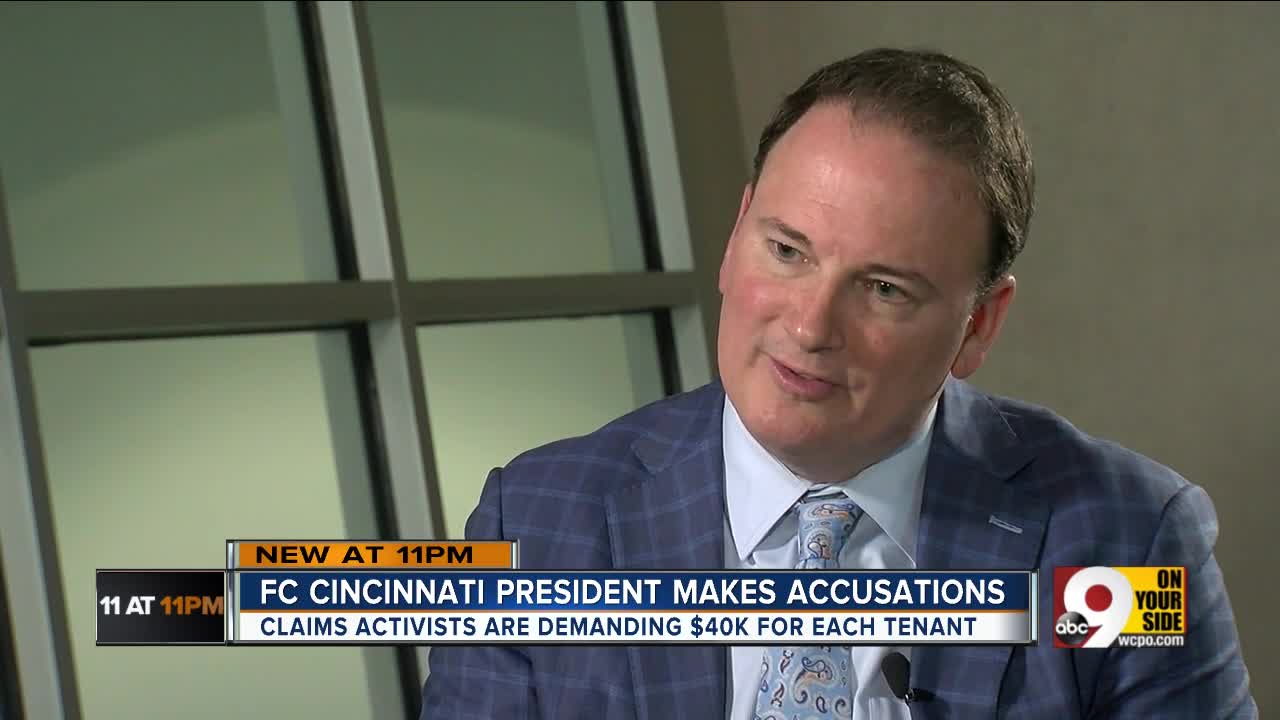 Activist Josh Spring traded insults Friday with FC Cincinnati president and general manager Jeff Berding, each man claiming the other had refused to pursue productive negotiations in the bitter skirmish over a pair of West End apartment buildings purchased by the team.

CINCINNATI — Activist Josh Spring traded insults Friday with FC Cincinnati president and general manager Jeff Berding, each man claiming the other had refused to pursue productive negotiations in the bitter skirmish over a pair of West End apartment buildings purchased by the team.

Per Spring, executive director of the Greater Cincinnati Homeless Coalition: “Everybody who lives here is more than aware that FC Cincinnati and Jeff Berding wants them out of their homes. That’s why people are fighting so passionately. They believe they have a right not to be displaced so some men can kick a ball around a field.”

Per Berding, who called Spring a “professional troublemaker” in an interview at WCPO offices: “Our interest is ensuring that the residents have the opportunity to be treated with care and compassion and be relocated successfully into safe and secure housing.

“We’re wiling to pay for folks’ moving costs. We’re willing to give them additional dollars in order to support the transition, but at the end of the day we were told that some folks had been advised that they had lottery tickets, and that’s certainly not the case.”

RELATED: FC Cincinnati offers to let West End tenants stay until Oct. 31 if they vow to move out by then

FC Cincinnati purchased 1559 Central Avenue and 421 Wade Street shortly after breaking ground on its nearby stadium in late 2018. The former owner informed the buildings’ tenants in February they would be required to find new places to live April 30. The 70-day deadline was double the minimum required by Ohio law, and all of the tenants were month-to-month renters, but some — foremost among them 99-year-old Mary Page, whose family said she had medical needs that demanded specialized care — protested they would not be able to find suitable new homes in time.

The subsequent public imbroglio grew to involve not just the team and tenants but City Council and the Greater Cincinnati Homeless Coalition.

Caught in the middle of it all Friday was Crystal Lane, a tenant who said she still did not want to leave. She acknowledged FC Cincinnati had offered to contribute $2,500 toward a new apartment for each tenant and to cover the cost of relocation. However, she said the convenience of living at 1559 Central — “close to everything, easy to get to everything” — was too important to her and her four children.

“It’s stressful,” she said. “Very stressful, but I don’t plan to give up the fight because it’s not right. They’re stating we won’t meet with them, and that’s not true. When they finally came to a meeting with us, they didn’t want to sit down.”

That’s not right, according to Berding, who said team representatives arrived at a meeting with tenants in good faith and were ambushed by Spring and a lawyer, who wanted to begin legal negotiations at that moment.

Berding said he refused, knowing the team had not prepared for such negotiations that night. He hasn’t been able to get in touch with the lawyer since then, he added, but has been told Spring has encouraged tenants to plant their feet in hopes of a payout larger than $2,500 — perhaps up to $40,000.

“No plan results when the lawyer avoids you and you got a professional troublemaker telling people that they’re going to get paid, telling them that they’ve got a lottery ticket,” he said.

He did not identify the source of the rumor. Spring denied it.

Spring said he believed his role in the conflict was to stand up for tenants’ right to “basic decency” and prevent the possible loss of low-income housing in the West End. (Berding said the buildings would likely be converted to ADA-compliant parking for the stadium.) He also insisted he was willing to meet with the team.

It’s not about victims, Berding argued. It’s about the limits of the law.

“We’re a society that’s based on laws,” he said. We have laws. People are expected to follow laws. (The tenants’) leases have expired. We’ve given them time. We’re willing to give them more time, but, at the end of the day you have to follow laws. The leases are expired.”

He added the team was willing to substantially extend the amount of time tenants would be allowed to stay in both buildings only if a plan for their eventual exit could be agreed upon by the end of May. If not, the team could also withdraw its offer of relocation assistance.

As for Mary Page, whose story first brought the situation to public attention, he said the team had offered to help her family find a senior living facility with round-the-clock care or pay for a new hospital-style bed if she were to move into an apartment. The two groups remain in communication, according to Berding.