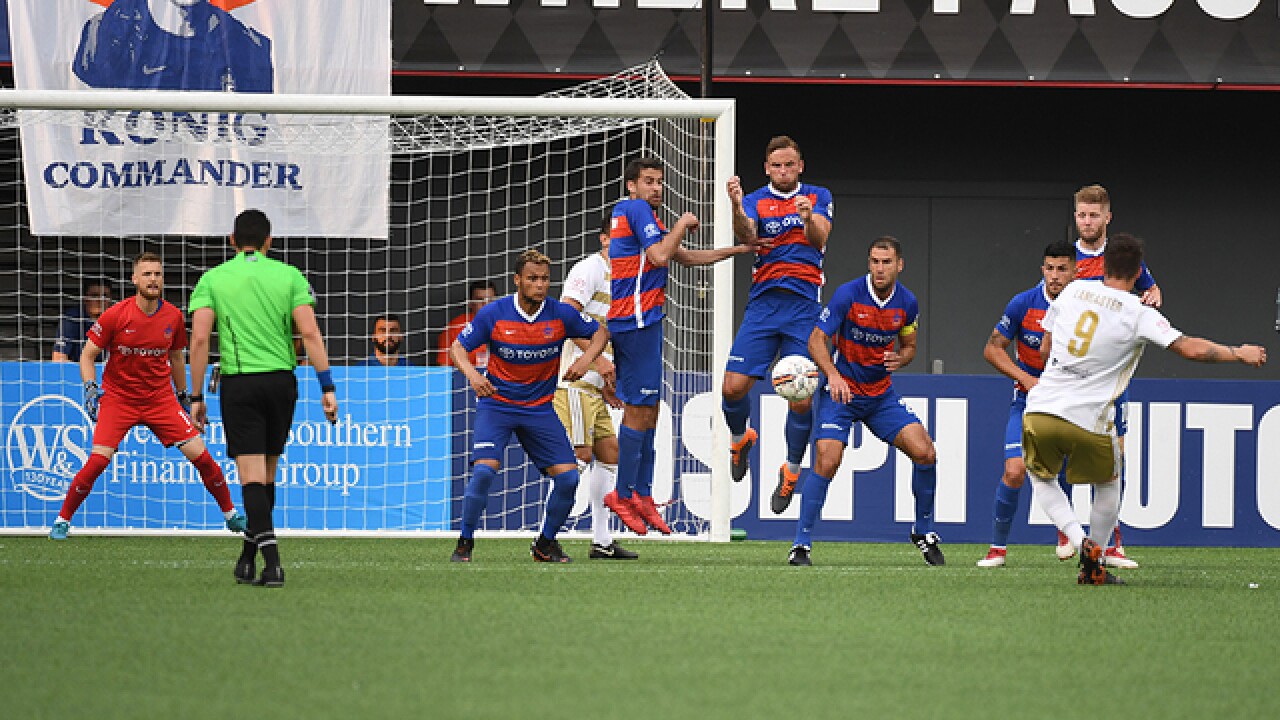 Copyright 2018 Scripps Media, Inc. All rights reserved. This material may not be published, broadcast, rewritten, or redistributed.
Louisville City FC forward Cameron Lancaster (9) kicked and scored against FC Cincinnati goalkeeper Evan Newton (1) in the first half at Nippert stadium Saturday May 26, 2018. FC Cincinnati lost 0 to 2 against Louisville City FC. Photo by Joseph Fuqua II for WCPO

CINCINNATI --- FC Cincinnati experienced its share of highs this week, but Saturday’s derby against Louisville City FC was one of the club’s few low points this season.

Following a third-round win in the U.S. Open Cup on Wednesday and news of a likely invitation into Major League Soccer coming Tuesday, the Orange and Blue couldn’t carry the excitement back to Nippert Stadium for the second match in the River Cities Cup.

WATCH: Despite the loss, FC Cincinnati fans were beating the drum for Major League Soccer:

Cincinnati (6-3-2) surrendered its lead in the United Soccer League Eastern Conference with a 2-0 loss to rival Louisville in front of 26,495 fans. Louisville (7-2-1), which entered the game in second place,  moves to the top of the standings.

“First of all, disappointing result, obviously, but also equally disappointing performance,” FC Cincinnati coach Alan Koch said. “We weren’t happy with how we performed tonight whatsoever. For the first five or 10 minutes, Louisville was essentially in complete control, so fair play to them and congrats. They won the game, and they deserved to win.

"That’s a bitter pill for us to swallow," Koch said. "We know we are capable of more than we showed tonight.”

FCC looks to bounce back at New York Red Bulls II on June 2 but will get a chance to raise spirits before then when MLS commissioner Don Garber comes to town Tuesday for a major announcement regarding the future of soccer in Cincinnati. The club is expected to be awarded an expansion bid to join the top division in 2019.

Here is an analysis of Saturday’s game:

1. No-shows: Cincinnati got off to a slow start, conceding a goal in the 15th minute, and just never seemed to recover. Koch believed it came down to a lack of effort, but whatever it was, FC Cincinnati didn’t look like the team that showed up earlier in the week.

The Orange and Blue struggled to string together passes and create chances in the first half while managing just 48.4 percent possession, 69.6 percent passing accuracy and only two shots. Its minimal improvements in all areas during the second half weren’t enough against the defending USL champions.

Louisville City got an insurance goal in the 73rd minute when George Davis’ shot from the top of the box deflected off defender Matt Bahner’s back and looped past goalkeeper Evan Newton, who didn’t have time to adjust to the change in direction.

“It was the sheer work rate,” Koch said. “There is no excuse for that. I think Louisville came in and they were ready to play from the start. We showed glimpses of what we're capable of at times, but across the full 90 minutes it wasn't quite what we expect it to be.”

While FC Cincinnati wasn’t at its best, Louisville City seems to have something figured out in this series. The rival club from Kentucky accounts for both of FC Cincninnati’s home losses this season.

2. Offense shut down: FC Cincinnati was third in the league with 20 goals through 10 matches, but Louisville City managed to shut down the attack.

The rivals are the only team to hold FC Cincinnati scoreless, and they’ve now done it twice. Cincinnati finished with nine shots, but only one was really on frame.

The Orange and Blue were playing a 4-2-3-1 the last outing and this time had Danni Konig and Emmanuel Ledesma up front, but the club struggled against a high press, and the midfield of Kenney Walker, Corben Bone, Richie Ryan and Nazmi Albadawi couldn’t seem to put together the passes to fuel the attack.

“When you have a group that has as much talent as Louisville has ... and they've played together a lot, you're going to have to be creative and do something special,” Koch said when asked about Louisville’s ability to shut down the attack. “We've shown we're capable of special things. We've done a lot of special things over the last few weeks, the last few months. But we just didn't have any of those moments tonight.”

3. No love lost: Not surprisingly, it was a physical game between these two rivals, and two of the biggest moments involved fouls.

Louisville City got on the board in the 15th minute on a free kick by Cameron Lancaster after a bad takedown by Richie Ryan about 23 yards out. FC Cincinnati’s best chance came on a free kick in the second half after Paco Craig tripped up Danni Konig on a nice run toward the box, around the same spot where Lancaster scored.

Konig started to get into it with another Louisville player, which started a bit of a yelling match between the two sides, and Craig was given a yellow card.

The teams combined for 37 fouls and five yellow cards, including Dekel Keinan’s fifth of the season, which means he will have to sit the next game. Additionally, assistant coach Yoann Damet was ejected, for reasons Koch didn’t understand, and he will have to miss the next game. Koch and Louisville coach James O’Connor exchanged words at one point in the second half, drawing a lecture from the fourth official.

This matchup has a heated history. While the first meeting this year, a 1-0 loss for FCC in its home opener, was pretty tame, that couldn’t be said of any of the meetings in 2017. The most memorable game in the series, a 1-1 draw on April 22, 2017, ended in controversy after O’Connor accused Djiby Fall of biting one of his players. Fall wound up with a six-game suspension from the league.

Richie Ryan: Ryan was a little overzealous in the first half, causing the foul that led to Lancaster’s goal and then getting a yellow card in the 33rd minute for “persistent infringement.” He finished with four fouls, but was among the team’s most accurate passers (86 percent) on a night that wasn’t a strong suit for the group. Ryan had to be checked out by the medical staff after a collision with Kyle Smith in the 68th minute but finished out the game.

Emmanuel Ledesma: Ledesma has been on a tear lately, leading the team with four goals and seven assists, but he couldn’t put together that same magic against Louisville, which limited him to two shots in the run of play. He finished with a 75.9 percent passing accuracy rating and conceded a team-high five fouls. Konig was limited even more, as he had just 20 touches (Ledesma had 48), one shot and 12 passes, eight of which were successful.