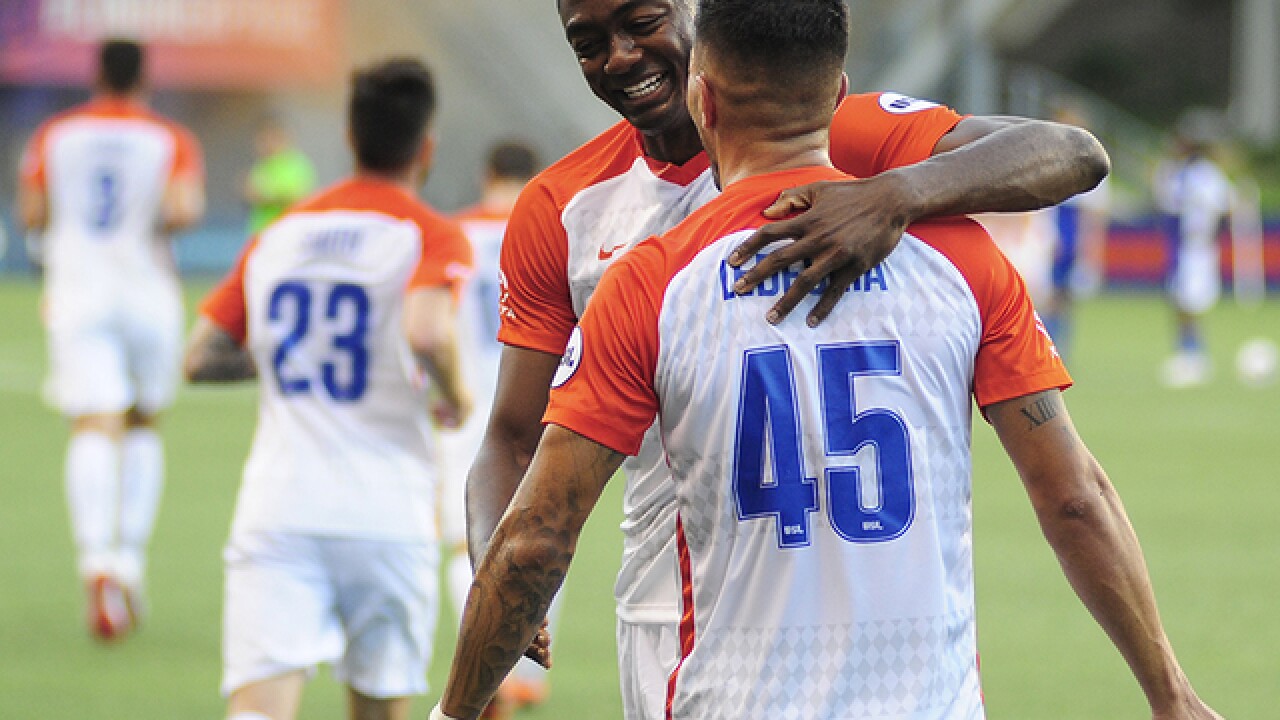 Copyright 2018 Scripps Media, Inc. All rights reserved. This material may not be published, broadcast, rewritten, or redistributed.
JOSEPH FUQUA II
<p>FC Cincinnati midfielder Emmanuel Ledesma (45) congratulated by teammate forward Fanendo Adi (9) after Ledesma scored on a penalty against Penn FC in the second half at Nippert stadium Sunday August 12, 2018. FC Cincinnati won 1 to 0 against Penn FC. Photo by Joseph Fuqua II for WCPO</p>

CINCINNATI -- Fanendo Adi hasn't started a game in more than two months, but he's in no hurry to jump in and take over a forward spot with FC Cincinnati.

Adi, the club's first designated player for the inaugural Major League Soccer roster next year, is finishing out the season in the United Soccer League after FCC acquired him from the Portland Timbers a little more than two weeks ago.

He made his first appearances off the bench the past two games, and it appears Adi will continue to play the role of a sub for at least a while longer as he continues to transition with the club.

"With Portland, we had a misunderstanding (with new coach Giovanni Savarese), but it's part of the game, and you move on, and you put it in perspective and let things go as they come," Adi said. "Here it's going to take a process. I'm not in a rush to start a game.

FCC is bringing Adi along slowly, at least in part to give him time to get acclimated, but coach Alan Koch hinted he might not be 100 percent game-fit.

Adi played 14 games with Portland this season, starting nine of them, but played only twice in the last six for which he was available.

"We're having to monitor him daily with his workloads just because he wasn't playing that much at the end of his time in Portland, so we have to manage him," Koch said.

The opportunities will be there in the future with FCC, but coming to Cincinnati was an adjustment in a lot of ways.

The level of the USL, while constantly improving, is well below what Adi is accustomed to after four-plus years in MLS, and he has never had to move since coming to the United States in 2014. Last week, he took some time off to head back to Portland and tie up loose ends as part of the move to Cincinnati.

For now, Adi is staying in hotels.

"It's my first time to move within the States, so it's quite intensive, but the club is helping me in every way they can to plan the move," Adi said. "… The adjustment takes time but as long as we are willing to work together, I think it's going to be fruitful."

Adi doesn't deny he misses being in MLS but said it is an honor to be considered a foundation of Cincinnati's team for next year.

He and former San Jose Earthquakes midfielder Fatai Alashe were announced July 30 as the club's first MLS players for 2019, and they are both on loan to finish this season in the USL. Alashe was in the available 18 on Sunday but didn't play, and he sat out his first week with the club because of a groin injury he suffered with San Jose.

RELATED:  FC Cincinnati brings in two top-division players in hopes of leaving the USL with a title

"It's a huge sacrifice for me, coming from the MLS and playing in the USL, coming to give everything I can to the club," Adi said. "It's something I will have to think for a few weeks and probably get over it, but for now it's definitely going to be an adjustment that I have to be committed to doing.

"If I said I don't miss it (Portland), I would be lying. The level is very different. Respect to the players and everything, but it's different, and that's what I spoke to the coach about."

Adi was welcomed with roaring cheers from the crowd his first appearance Aug. 4 and a banner hung from the Bailey saying, "Cincinn-Adi, here we go." Displaying nimble footwork, he showed a little taste of why he was so successful in Portland -- scoring 16 goals in two of his seasons and 10 in another -- but wasn't too involved as the offense struggled to put things together in the attacking third that game.

In his next outing Sunday, he was a little more active and had a shot at his first goal but was denied a call when he was taken down in the box at the end of the game.

Koch said Adi seems to be fitting in well so far and wants to make an impact as the team continues its push to the playoffs leading the USL Eastern Conference by five points. Cincinnati hosts third-place Charleston on Saturday.

RELATED:  FC Cincinnati will be selective about which types of players the team selects

"I can see it -- he wants to come in, and I thought his performance there at the end of the game Sunday was good," Koch said. "We just need to get him that opportunity, but he's got to, like everybody else, work hard every day to get that opportunity. There are no freebies in this business."

Adi hasn't fully integrated into the team yet. Although most players tend to stay after practice to put in extra work, Adi is one of the few heading straight to the locker room.

That might be his way of trying to preserve himself, as he already has complained about the turf at Nippert Stadium. Adi played on turf in Portland, but the surface there was in much better shape, he said.

FCC president and general manager Jeff Berding previously has said the club is looking to make improvement to the turf, and the club will be training on grass when its practice facility opens next year. But in the meantime, Adi doesn't particularly enjoy spending all of his time on the turf.

RELATED:  FC Cincinnati proposes more significant changes at Nippert Stadium until its own stadium is ready

"It feels a whole lot different," Adi said. "I complained about it, of course, but we're in the midst of the season, and nothing can be done at the moment. Training on turf and playing on turf is a huge tax. I'm very impressed with the boys because to them I was saying, 'How can they be playing and training on it?' But this is where the club is, and we have to respect that.

"It plays a big part. The turf plays a big part. I think it's very old, and they play all kind of sports on this ground, so it's beaten a lot. Hopefully, in January, things can be changed a little bit where it can be focused on the soccer team playing on the turf. We've only got a few games left and the playoffs, and we'll try to do everything possible to win and make everyone happy."

Adi wants to help bring a championship to Cincinnati, whether it be in the USL or MLS – preferably both. He has seen some positives so far but also offered some critiques of things he hopes he can help improve going forward.

"We have very good players on this club, and we have to try to keep the ball more because the first two games I watched, it was a lot of kicking the ball, which sometimes is necessary and sometimes unnecessary," Adi said. "The level is different in MLS, but it's something we will catch up to. We are building a team for next year so a lot of players are going to come in, and as long as we are focused on improving every day, I think we will be good."