Analysis: Bengals learn to make up for their mistakes 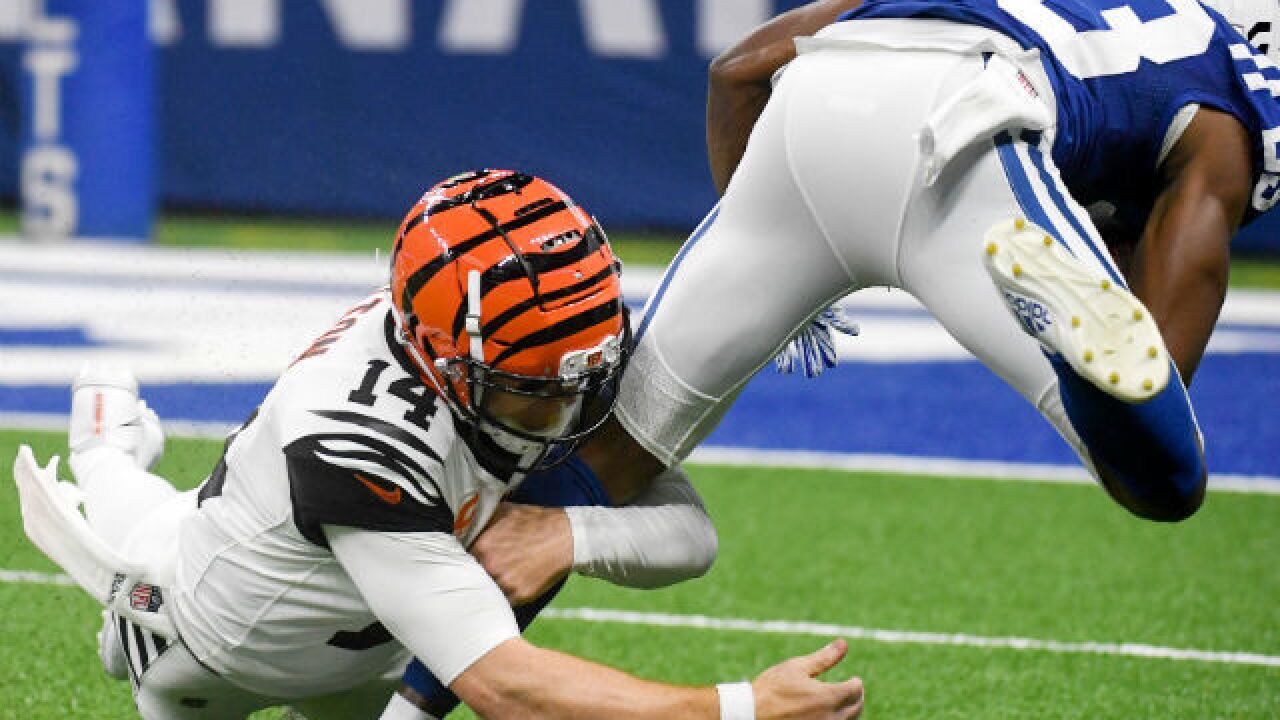 Image copyright 2018 Getty Images. All rights reserved. This material may not be published, broadcast, rewritten, or redistributed.
<p>INDIANAPOLIS, IN - SEPTEMBER 09: Andy Dalton #14 of the Cincinnati Bengals tackles Kenny Moore II #23 of the Indianapolis Colts, preventing a touchdown after Loore intercepted a Dalton pass at Lucas Oil Stadium on September 9, 2018 in Indianapolis, Indiana. (Photo by Bobby Ellis/Getty Images)</p>

When Bengals safety Shawn Williams lowered his helmet on Colts QB Andrew Luck and was penalized and ejected in the first quarter on Sunday, it meant the Bengals’ depth at safety would be tested early in the regular season opener.

It also meant Clayton Fejedelem would get the bulk of the playing time the rest of the way. A couple hours later, it was Fejedelem who jarred the ball loose with a clean hit on Colts tight end Jack Doyle and returned it 83 yards for a touchdown with 24 seconds left to seal a come-from-behind 34-23 victory.

RELATED: Flying Pigskin: Cincinnati Bengals comeback to win 34-23 against the Colts in Indianapolis

The anatomy of the Bengals’ rally from a 13-point deficit late in the third quarter was that no matter what adversity they faced – and they faced quite a bit on Sunday – the Bengals were able to overcome their errors in judgment. For every bad play, there were several more good ones.

The Bengals scored 17 points in the fourth quarter to turn defeat into what appeared on the scoreboard to be a comfortable win.

“Great team win,” Fejedelem said. “Great to come back like that. What was it, 13 points? Then finish with a little bit of a spread there at the end. So, a great way to come in here at halftime, regroup and go out there and take care of business.”

Williams’ penalty and ejection were the first implementation of a new rule approved in March by NFL team owners at the league meetings designed to eliminate unnecessary hits to the helmet where players lower the head to initiate contact with an opponent. It was the correct call.

“Well, you just can’t – you’ve got a quarterback running, he’s in the grasp and you just got to be careful,” said Bengals head coach Marvin Lewis. “You can make sure he’s down, you’ve just got to tuck it. It’s a point of emphasis and you don’t want to leave it in the hands of other people.”

It was a mistake-prone start to the season for the Bengals, and their lack of discipline early in Sunday’s game nearly resulted in a devastating loss against an undermanned opponent.

On the second play from scrimmage, Dalton under pressure tried to loft the ball to Joe Mixon and it was intercepted. It wasn’t a good decision by Dalton, who should have taken the sack and lived to play another down. But linebacker Preston Brown made that moot when he intercepted Luck moments later.

Dalton didn’t appear fazed by the interception on his first pass attempt, however, and finished the game 21 of 28 for 243 yards and two touchdowns for a 109.7 rating. He also made the touchdown-saving tackle after his interception which ended up being among the plays that made the win possible. The play harkened back to Dalton’s tackle against the Steelers that ended his season in 2015. He came through it OK on Sunday.

“Just laying the hammer,” Dalton said in jest. “I think in that moment I was the last guy and it turned out to be a big play in the game, so you never how those plays matter, and this one made a big difference.”

It was an ugly first quarter for the Bengals in the RCA Dome. In addition to Williams’ ill-advised hit, A.J. Green also lost a fumble in the quarter. Green finished with six catches for 92 yards and a sensational diving grab for a 38-yard TD from Dalton which started the comeback in the third quarter.

“The first game is always an up and down roller coaster ride,” Green said. “At the end of the day, you just have to ride that wave. You have to make the play whenever your number is called and that's what we did.”

In the second half, Carlos Dunlap was flagged for roughing the quarterback where no helmet-to-helmet contact or any another type of flagrancy was apparent. But, the rule states, you can’t come down on the quarterback with the full weight of your body, which is exactly what Dunlap said he tried to avoid doing to Luck.

“There was no other way for me to try to avoid on the front side,” Dunlap said. “So, on the backside, I just tried to keep my weight from driving him into the ground, which is the terminology they use. I was upset. I mean, I tried to do the next best thing and keep all my weight from taking him to the ground.”

But the fact that the Bengals didn’t wilt after any of those events says something about this team. Certainly, there are things they need to clean up, but there’s also a resiliency with this group that is beginning to show itself on a more regular basis.

“Well, we just kept playing and that’s what the plan is,” Lewis said. “You don’t get time to hiccup or flinch. You’ve just got to keep playing. That was a four-quarter football game.”

Joe Mixon had a solid start to his second season with 95 yards on 17 carries for a 5.6-yard average. He also had five catches for 54 yards.

Sunday’s win was anything but aesthetically pleasing, but this is becoming somewhat of a trend. The Bengals have rallied from behind in the fourth quarter in each of their past three wins, over Detroit, Baltimore, and now Indianapolis. It wasn’t a thing of beauty, but that’s the way it often goes in the NFL where the margin between winning or losing is thin.

Bottom line: with the win on Sunday and the Steelers and Browns finishing in a tie in Cleveland, the Bengals next face the Ravens on Thursday night at Paul Brown Stadium for a chance to take over the outright lead in the AFC North through two weeks.

“It wasn’t a pretty game,” said Dalton. “There’s a lot that we’re going to be able to look at and we’re going to do better. But to come out with a victory like that, to win by two scores, is big because it wasn’t that way going into that last drive that they had. I think it gives us confidence and we just got to keep pushing.”