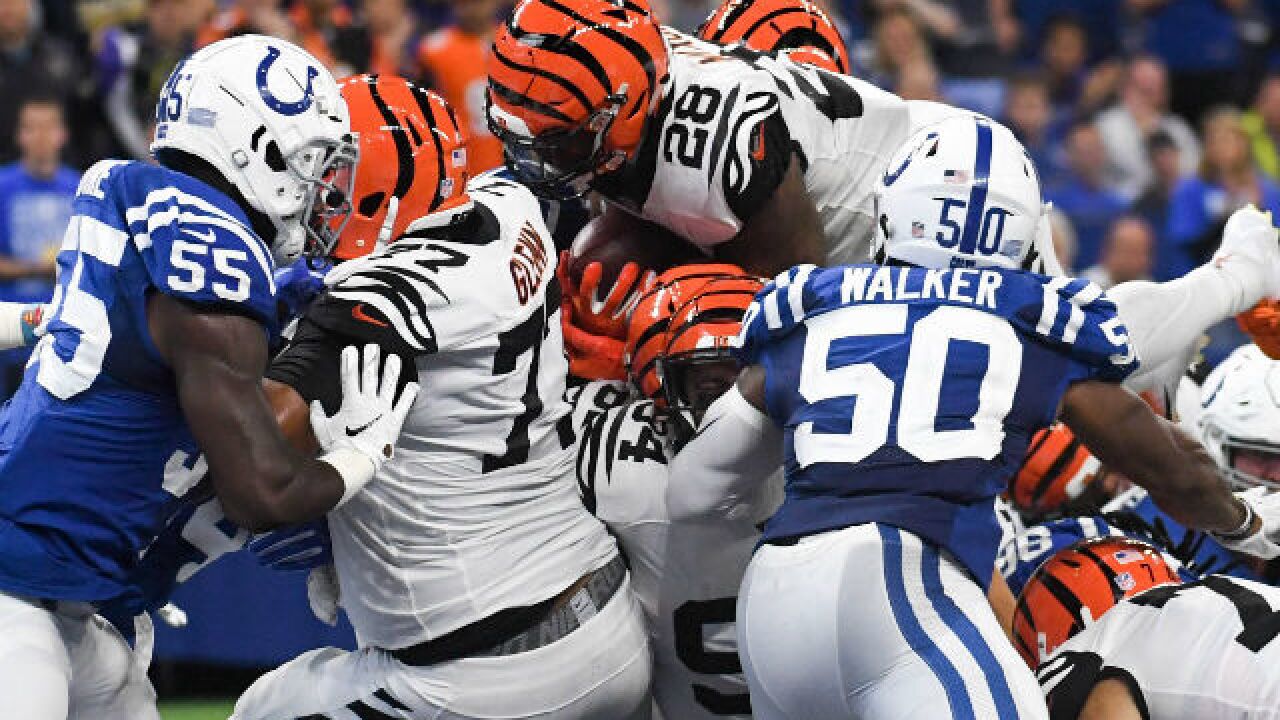 Image copyright 2018 Getty Images. All rights reserved. This material may not be published, broadcast, rewritten, or redistributed.
<p>INDIANAPOLIS, IN - SEPTEMBER 09: Joe Mixon #28 of the Cincinnati Bengals dives for a touchdown in the game against the Indianapolis Colts at Lucas Oil Stadium on September 9, 2018 in Indianapolis, Indiana. (Photo by Bobby Ellis/Getty Images)</p> 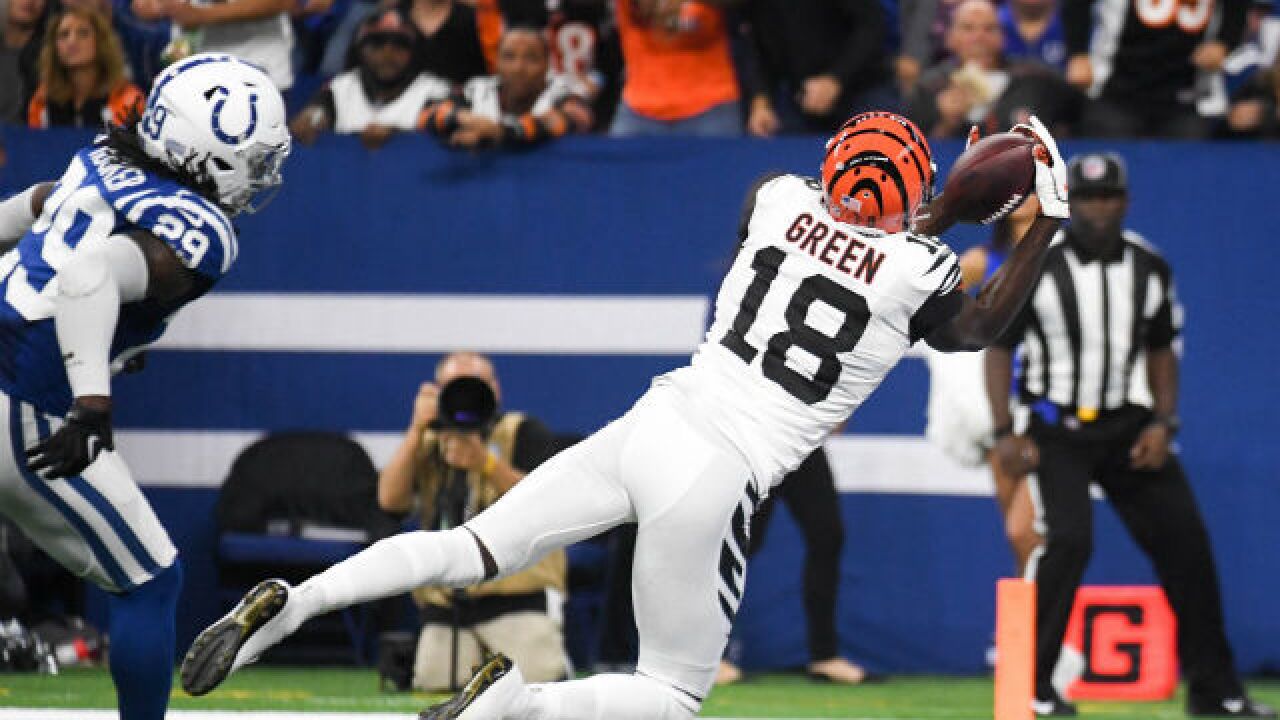 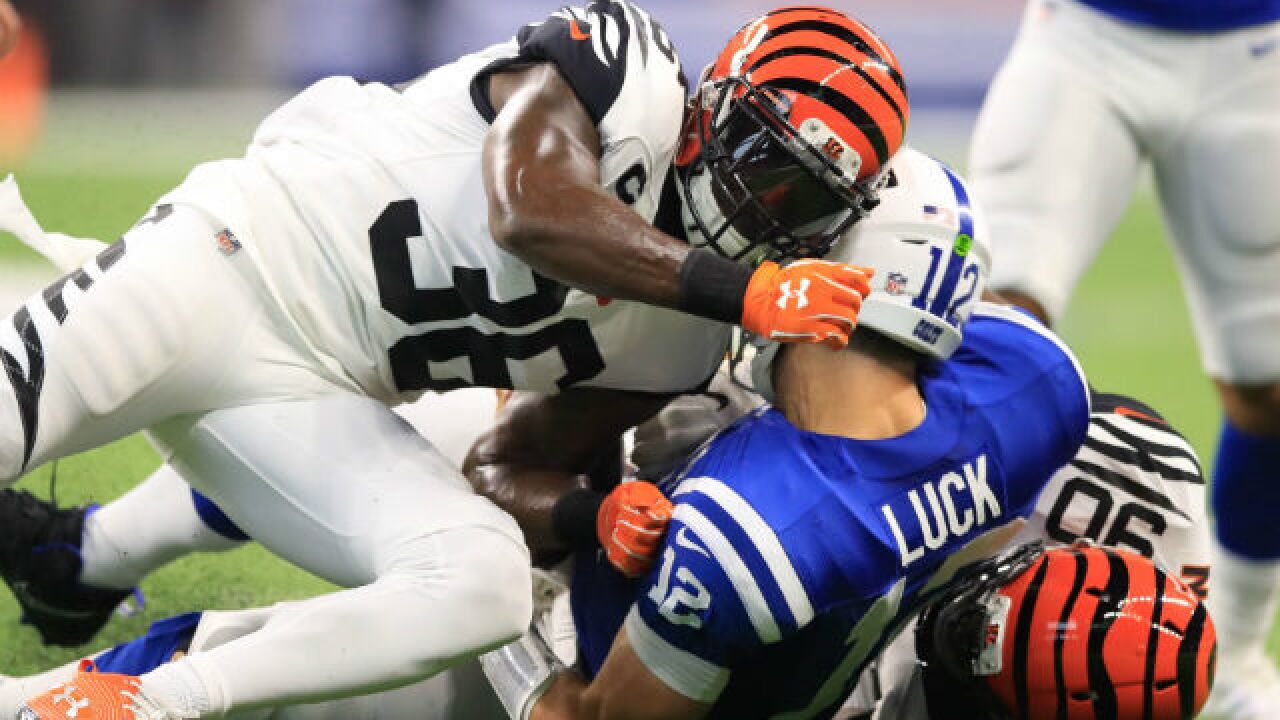 With the Colts driving for a potential game-winning TD in the final minute, the 2016 seventh-round draft choice caused a fumble with a big hit on tight end Jack Doyle at the 17-yard line, scooped up the ball and returned it 83 yards for a TD with 24 seconds left.

Fejedelem's play secured a come-from-behind 34-23 victory and got the Bengals' off to an uplifting start to the season. The Bengals, sparked by running back Joe Mixon, scored the last 24 points of the game.

"I was out there for a long series. I was pretty gassed, to be honest with you,"  said Fejedelem, who ran  down the sideline and only had to brush off a diving tackle attempt by quarterback Andrew Luck on his way to the endzone.

"I was looking around a little bit and no one was there so I just finished the play the right wway," Fejedelem said.

RELATED: Bengals learn how to make up for mistakes

"To make the strip and make the return is big," coach Marvin Lewis said.

"Really lucky he just turned, presented his chest and I saw the ball," Fejedelem said.

Doyle said he got stood up by another Bengals defender and Fejedelem knocked the ball loose before Doyle's knee hit the ground.

Fejedelem was pressed into service after starting safety Shawn Williams was kicked out of the game in the first quarter after a helmet-to-helmet hit on Luck.

Fortunately for the Bengals, Fejedelem was ready for anything thrown his way.

He entered the game with 25 tackles in his first two NFL seasons, but finished with 10 tackles Sunday and even seemed to choreograph the head-first dive to cap his first NFL score.

The victory ended Cincinnati's eight-game losing streak in Indy, gave the Bengals their fourth win in the past five openers and ended Luck's last gasp chance of a comeback in his first regular-season start in more than 20 months.

"It was relief at that point," Bengals quarterback Andy Dalton said after going 21 of 28 with 243 yards, two touchdowns and one interception. "Them driving the ball down there like that, I was nervous. Our guys made a great play. It's a big play to end it."

Mixon put a spark in a lethargic offense and the Bengals rallied from a 13-point deficit in the second half. The second-year back rushed for 95 yards on 17 carries and had five catches for 54 yards.

Mixon gave the Bengals a 24-23 lead when he dove over the pile of linemen on a 1-yard, third-down plunge with 11:07 left in the game after being stopped twice trying to run it in from inside the 5.

Randy Bullock added a 39-yard field goal to the 42-yarder he kicked in the first quarter to make it 27-23.

Green had six catches for 92 yards. Tyler Eifert had three catches for 44 yards in his return.

Luck nickeled-and-dimed the Bengals with short crossing passes until the Bengals finally mounted a pass rush in the second half. Luck was 39-of-53 for 319 yards, two TDs and one interception.

After Cincinnati took a 3-0 lead, Luck led the Colts 72 yards to set up Adam Vinatieri for the first of three first-half field goals. Luck’s perfect 26-yard TD pass to Eric Ebron made it 10-3 and when Vinatieri added a 38-yard field goal it was 13-3.

The Colts and Bengals both refrained from any player protests while the national anthem was sung. And neither team had anyone in the locker room.

Bengals: Preston Brown, the former Northwest High star playing his first  game as a Bengal, picked off Luck on the Colts' first possession of the game. Cincinnati was called for four personal fouls.

Colts: Adam Vinatieri made three field goals, missing a 55-yarder just before Cincinnati's go-ahead score. He has 562 field goals, three short of Morten Andersen's league record. Luck connected with nine receivers, led by Ryan Grant who had eight catches for 59 yards and Doyle who had seven catches for 60 yards.

Bengals: Brown limped off the field late in the first half with an injured right ankle. Defensive tackle Andrew Billings also left with leg cramps late in the third quarter.

Bengals: "You're back," Lewis said he told Luck after the game.

Colts: "I was certainly a bit emotional before the game and I wish we would have won," Luck said. "I think I was a little careless with the ball when we had a chance to put some points on the board and make it an insurmountable lead and we don't do it.

Colts: Begin a two-game road trip against the NFC East by visiting Washington next Sunday.