9 Takeaways from a disastrous day in Crashville 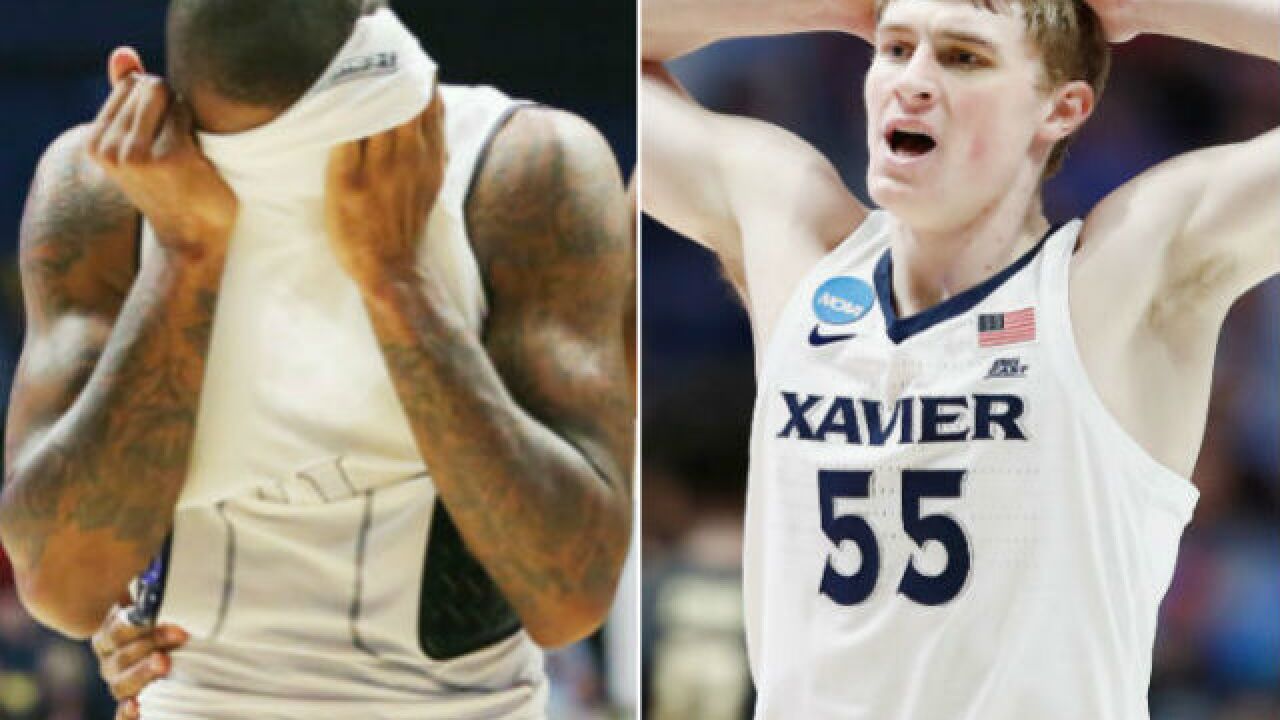 Image copyright 2018 Getty Images. All rights reserved. This material may not be published, broadcast, rewritten, or redistributed.
<p>Cincinnati's Gary Clark and Xavier's J.P. Macura wear their disappointment after both teams lost in the second round of the NCAA Tournament in Nashville, Tennessee on Sunday night.</p>

Editor's note: A prior version of this story misstated how many straight second-round exits the Bearcats have made in the past few years. WCPO regrets this error.

Over a span of roughly four hours, the No. 2 seeded Cincinnati Bearcats and No. 1 seeded Xavier Musketeers suffered heartbreaking losses in the NCAA Tournament, relinquishing double-digit leads in the closing minutes, and were added to the growing list of upset victims that have contributed to a new level of March Madness.

Xavier was the second No. 1 seed to lose in the first weekend. Cincinnati had been handed a clear path to the Elite Eight as the highest seed left in the South Region.

The crosstown rivals shared plenty this season: Top-10 rankings, outright conference titles, and high seeds. On Sunday, they were united in their misery.

They had other things in common on the court at Bridgestone Arena: They didn’t do the things that had made them successful throughout this season. and weaknesses that they had been able to mask this season were evident in crucial moments.

So, one of the more successful college basketball seasons in the city of Cincinnati has come to an abrupt end. Here are 9 takeaways from a miserable evening in Music City:

On Saturday, Chris Mack said he was “petrified” of Florida State’s ball pressure. His fears were confirmed on Sunday as the Seminoles scored 18 points off 18 Musketeers turnovers and had 10 steals. “The reason that we're not moving on, turnovers on our part caused by a tremendous amount of pressure from Florida State,” Mack said.

Marshall, who had been dealing with a back issue, started Sunday’s game but played only 12 minutes. The Musketeers missed his length and athleticism, which helped him have a standout freshman season. Marshall had zero points and two rebounds. With Marshall out, Trevon Bluiett and Kaiser Gates had to switch positions on the court, putting the Musketeers at a disadvantage. “Playing Kaiser at the four pushes Tre to the three a little bit and now he's guarded by a little bit more of a versatile athletic guy,” Mack said.

One reason the Musketeers had won so many close games this season was free-throw shooting. Coming into the NCAA Tournament, they were shooting 79 percent. On Sunday, they were 19 of 30 from the line for 63.3 percent, and that percentage dipped to 61 percent in the second half, denying themselves a chance to further extend their lead. “That really hurt us,” Mack said. “We've been a really good free throw shooting team all year.

4. Where were the stars at winning time?

Both the Bearcats and Musketeers had the ball in the final seconds with a chance to either win or tie the score. But, the final play was questionable.

Jarron Cumberland had fouled out, the Bearcats still had Gary Clark and Jacob Evans on the floor, down by one point with nine seconds left. Instead, the ball was in the hands of point guard Cane Broome, who committed a turnover to seal the defeat. Clark, one of the most decorated players in UC’s program history, never touched the ball with the season on the line.

Similarly, J.P. Macura fouled out for the Musketeers, who had the ball trailing 73-70 with 21 seconds left. Mack had given them two options, one for a quick two, another for a three. The play was run for Kerem Kanter, who for a big man is an adept perimeter shooter. But Kanter fired up an air ball. Trevon Bluiett wasn’t involved in the play.

5. The Bearcats’ offense failed them

When the shots stopped falling for the Bearcats, Nevada engineered its stirring comeback from 22 down over the final 11 minutes. UC didn’t score for the final 5:45. This was Mick Cronin’s best offensive team averaging about 74 points per game, but there were questions all season about whether the Bearcats’ offense was good enough for them to be successful in the NCAA Tournament. That question might have been answered on Sunday.

The rash of upsets across the bracket found its way to the Queen City on Sunday. Throughout the season, many predicted this year’s tournament could be among the most wide open in history. The craziness began with No. 16 seed UMBC knocking off top seed Virginia on Friday night. When the dust settled in the South Region, fifth-seed Kentucky was the highest remaining seed left. Xavier joined the Cavaliers as half of the No. 1 seeds failed to make it past the first weekend.

What a weekend it was for Cincinnatians in Nashville. Beautiful weather, St. Patrick’s Day, and a virtual sea of red and blue clad Bearcats and Musketeers fans swarmed Music City. This was supposed to be our coronation as the nation’s premier college basketball city. By Sunday night, the Bearcats would be packing for Atlanta and the Musketeers for Los Angeles as members of the Sweet 16. Instead, the hangover from this long weekend in Nashville will last for a while. That, however, shouldn’t take away from a marvelous season of basketball for local teams.

Cronin hasn’t exactly been embraced by Bearcats fans during his tenure. A first-round exit in 2016 and now two straight second-round exits will apply additional pressure. There’s no denying what Cronin has achieved in Clifton, especially when you consider the state of the UC program when he took over.

Musketeer fans probably are dreading another season of Mack rumors. By now, Xavier fans should be somewhat immune to talk about a coach leaving. With each exit, the program has gotten better, from Gillen to Prosser to Matta to Miller to Mack. But, Mack is the first coach to make Xavier a destination job. Soon, Louisville might come calling. Here we go again.

9. Not a fond farewell

The worst part of any NCAA Tournament defeat is the finality for the seniors, the realization that just like that, their career is over. That stung perhaps a little worse for Clark, Bluiett and Macura on Sunday. All three have put their stamp on the Bearcats and Musketeers programs during their four years. Rough way to go out.

“I love coaching them," Mack said. "I felt bad for them. Wish I could have done more, you know, to earn the right to keep playing.”