No. 1 seeded Xavier Musketeers are one and done after blowing late lead to Florida State in NCAA 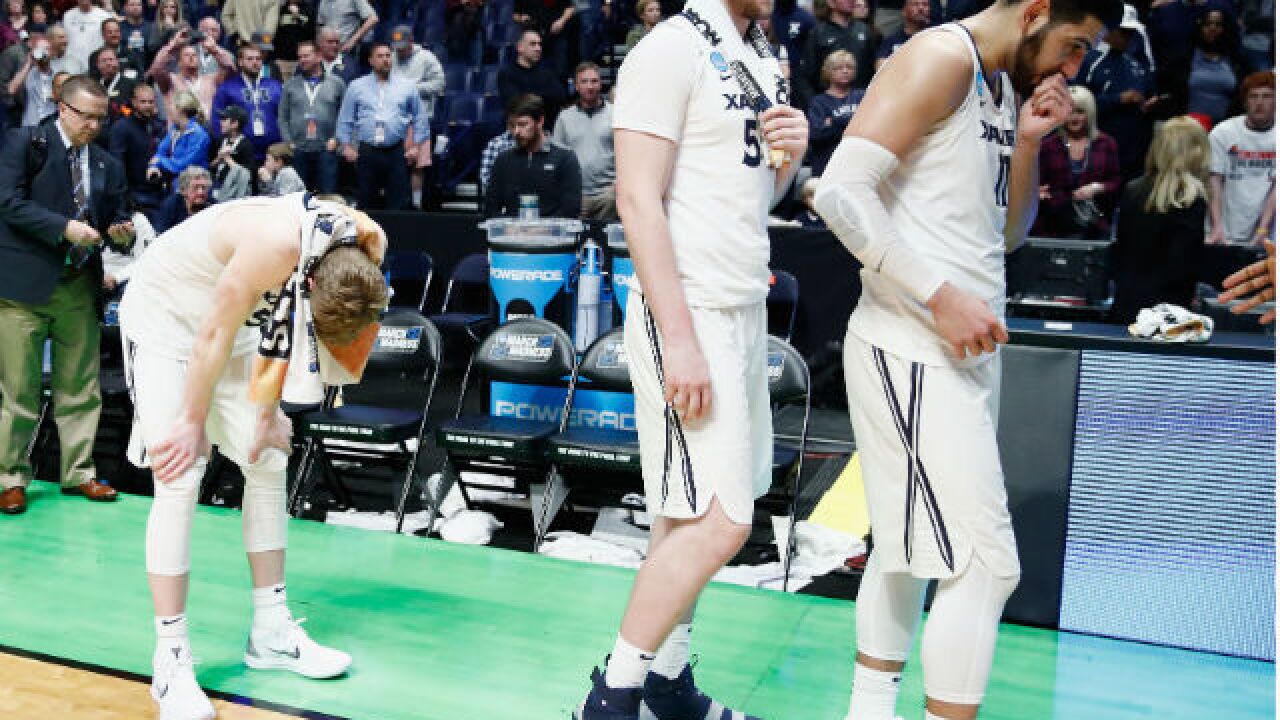 Image copyright 2018 Getty Images. All rights reserved. This material may not be published, broadcast, rewritten, or redistributed.
<p>NASHVILLE, TN - MARCH 18: J.P. Macura #55, Sean O'Mara #54 and Kerem Kanter #11 of the Xavier Musketeers react after falling to the Florida State Seminoles in the second round of the 2018 Men's NCAA Basketball Tournament at Bridgestone Arena on March 18, 2018 in Nashville, Tennessee. (Photo by Andy Lyons/Getty Images)</p>

NASHVILLE, Tenn. - Cincinnati may be saddled with a reputation as a city of losers after Sunday night.

The top-seeded Xavier Musketeers will be thinking about Sunday night's loss - well, forever.

The Musketeers joined No. 2 seed Cincinnati on the sad, sad road back to the Queen City after losing a 12-point lead in the last 10:30 and falling to No. 9 seed Florida State 75-70 in the second round of the NCAA Tournament.

"Obviously, tough loss for our group," Mack said. "Pretty emotional ending, the finality of what I think is the greatest sporting event in our country."

Senior guard J.P. Macura said he felt this was the best team he's played on.

"For us to lose this early, it just, it feels terrible," a quiet Macura said in the locker room.

Believing they had a chance to go all the way, Xavier and fans will rue the day wondering what might happened if they had advanced to the Sweet 16 or the Elite Eight, like last year. Now Florida State (22-11) will play fourth-seeded Gonzaga on Thursday night in Los Angeles.

The Seminoles outscored the Musketeers 18-4 down the stretch, running through the Xavier defense that held it in check for most of the game.

"We were much better than Xavier in the last two and a half minutes of the game," Florida State coach Leonard Hamilton said. "Sometimes when the games are close, that's all that's important."

"We played a team that played really, really desperate down the stretch, so nothing to hang our heads about," Mack said. "If you had told me at the beginning of the year that we would win a Big East championship, I would have signed up for that in a heartbeat.

"Tough night to end it here."

PJ Savoy made a 3-pointer with 1:08 left to give Florida State its first lead of the second half and added two free throws to finish off the Musketeers.

Maybe the death knell came when Macura got his fourth foul with 8:58 to go and Xavier ahead 56-44. Mack pulled Macura and didn't put him back in until it was 66-63 with 4:21 remaining.

Xavier didn't score a field goal after Karem Kanter's jumper with 3:56 left for a 68-66 lead. FSU's Mfiondu Kabengele scored his second straight bucket tying it up at 68 with 2:32 to go.

Then Macura fouled out on a charge with 2:00 left.

With Bluiett in early foul trouble, Macura and Kanter picked up the scoring load.

Macura finished with 17 points, Kanter had 15 - mostly in the paint - and Paul Scruggs added 11. Bluiett came around late in the game to finish with eight, but he also had five turnovers. It was just his third game all season not scoring in double digits.

Macura and Bluiett had to go to the bench in the first half with two early fouls, but Xavier led at halftime 34-32 despite missing nine of its last 10 shots.

This was sweet payback for Florida State after then-No. 11 seed Xavier routed the Seminoles 91-66 a year ago in the very same round in the same region.

"Definitely," Cofer said. "I don't think anybody gets a chance to play them again two times in a year."