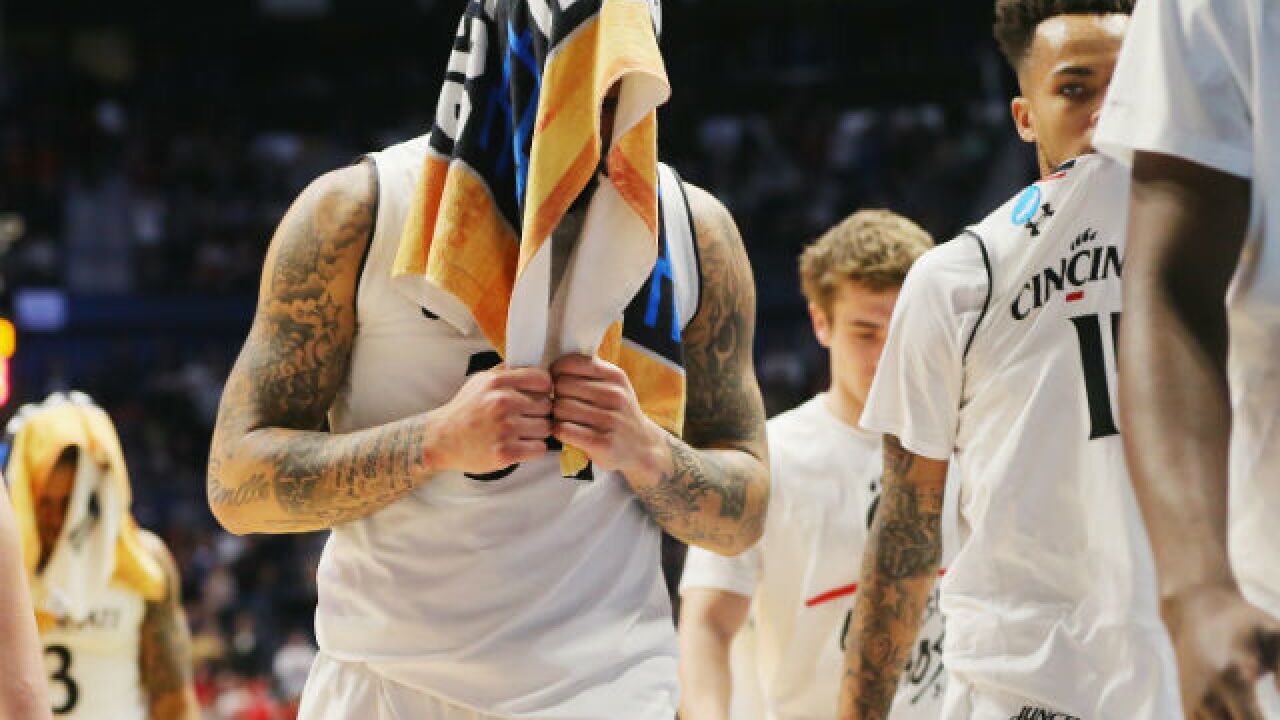 Copyright 2018 Scripps Media, Inc. All rights reserved. This material may not be published, broadcast, rewritten, or redistributed.
<p>NASHVILLE, TN - MARCH 18: Jarron Cumberland #34 of the Cincinnati Bearcats covers his head with a towel as he and his teammates walk off the court after falling to the Nevada Wolf Pack in the second round of the 2018 Men's NCAA Basketball Tournament at Bridgestone Arena on March 18, 2018 in Nashville, Tennessee. (Photo by Frederick Breedon/Getty Images)</p>

NASHVILLE, Tenn. – It is a loss that will haunt the University of Cincinnati basketball program for quite some time.

It was a game the Bearcats seemingly had in hand, leading by 22 points with 11 minutes remaining.

In the end, it was a major opportunity missed for head coach Mick Cronin’s program.

“The game's never over, obviously, in the NCAA tournament … until the clock hits zero,” Cronin said.

The Bearcats, the No. 2 seed, lost in stunning fashion to No. 7 seed Nevada, 75-73, on Sunday night at Bridgestone Arena.

The Bearcats said they weren’t looking past the Wolf Pack, even after a slew of upsets in the South Region opened a clearer path for them to the Elite Eight.

And, they seemingly dispelled any concerns about taking Nevada lightly when they began the game with a 10-0 run.

But, the Bearcats (31-5) might have begun to eye a trip to Atlanta and a matchup with No. 11 seed Loyola-Chicago when they built a 22-point lead midway through the second half.

Josh Hall’s put-back with nine seconds left put the Wolfpack ahead, and UC could not get off a shot before the buzzer at the other end.

The game ended on a Cane Broome turnover, vanquishing any hopes the Bearcats might have had of reaching their first Final Four since 1992.

“We were playing 4-on-3 and got the deer-in-the-headlights look,” Cronin said. “Ball stopped dropping for us. We got fouled a lot of times and it wasn't called around the rim. And that got in our heads. It affected our defensive execution.”

The Bearcats’ vaunted defense, which ranked just behind Virginia in most defensive metrics throughout this season, did little to disrupt the Wolf Pack in the second half.

“The thing that's amazing … is just the fact that we just played 40 minutes and had two turnovers against arguably one of the most aggressive, best defensive teams in the country,” said Nevada coach Eric Musselman.

As Cronin pointed out, Nevada plays five guards, and the Wolf Pack averages around nine turnovers per game. They handled the ball well on Sunday night, too, especially down the stretch.

When the shots stopped falling for the Bearcats, Nevada made its run.

“We knew they were going to make their run at the end of the day,” said Bearcats senior forward Kyle Washington. “Honestly, we thought we were still going to win, regardless.”

The Bearcats had their best offensive team under Cronin, averaging around 74 points per game. But, that has been a question for them all season, whether their offense was good enough for sustained success in the NCAA Tournament.

Worth noting:  the teams with the top two defenses in the nation – Cincinnati and Virginia – did not make it out of the first weekend.

On Sunday, a team that has earned its reputation for creating offense from its defense let its offense adversely impact the other end of the court.

“You know, the game is 40 minutes. Coach kept telling us that it's not over,” Bearcats guard Jacob Evans said. “We got to keep playing until the clock hits zero. And they started to make their run. Like I said, we missed some open (shots), and we made open ones and tough ones.”

So, Gary Clark’s standout Bearcats career ends with a fourth straight second-round exit in the NCAA tournament, with him sitting on the court at Bridgestone, dejected as the Nevada players celebrated around him.

Clark finished his career as one of the most decorated players in program history, and just the fifth Bearcats to have more than 1,000 points and rebounds.

But, NCAA Tournament success eluded him.

“Obviously, feel terrible for our guys,” said Cronin. “But it's been an honor to coach Jacob and Kyle in particular that are sitting here with me and, obviously, Gary Clark and all the guys. We've had an unbelievable season, and I appreciate their attitude and their effort.”

The Bearcats won an outright American Athletic Conference regular season title and the tournament championship. They were ranked No. 6 in the final Associated Press poll, their highest ranking since 2001-02.

There were those who said the Bearcats weren’t tested thoroughly enough in non-conference games and in the AAC, which had only three participants in this year’s tournament, all of which have been eliminated. There were concerns about the Bearcats’ offense and whether their defensive style would translate into tournament wins.

Hard to argue any of those points in the aftermath of Sunday’s loss.

It will take some time for the pain of the Nevada loss to ease for the Bearcats who had a relatively young squad this year.

But, there is a lot of promise for next season’s team with the likely return of Washington, Evans, and Jarron Cumberland, who made a big leap from his freshman to sophomore seasons. The Bearcats were a relatively young team this year.

“We had a pretty good run this year,” Evans said. “We won 30-plus games again. But at the end of the day, there (are) no more victories. Come to Cincinnati, we prepare to win a championship every year and we fell short.”