Teams must cut rosters down to 53 by Saturday 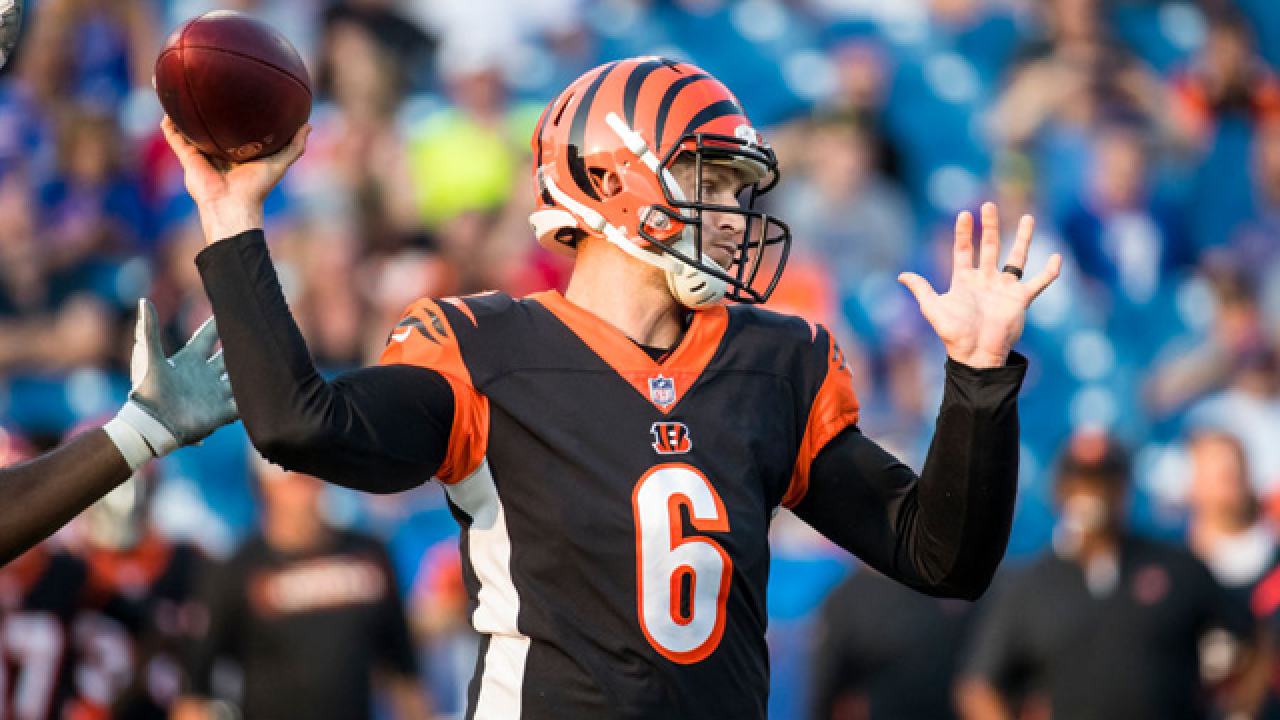 Copyright 2018 Scripps Media, Inc. All rights reserved. This material may not be published, broadcast, rewritten, or redistributed.
<p>ORCHARD PARK, NY - AUGUST 26: Jeff Driskel #6 of the Cincinnati Bengals passes the ball during the fourth quarter against the Buffalo Bills during a preseason game at New Era Field on August 26, 2018 in Orchard Park, New York. Cincinnati defeats Buffalo 26-13 in the preseason matchup. (Photo by Brett Carlsen/Getty Images)</p>

CINCINNATI -- Jeff Driskel knew last year, in his first training camp with the Cincinnati Bengals, that he probably wasn't going to be replacing AJ McCarron as Andy Dalton's backup.

Now that McCarron has moved on to Buffalo in free agency, however, Driskel has a real shot.

Driskel, whom the Bengals claimed off waivers from San Francisco at the start of the 2016 season, is competing with sixth-year veteran Matt Barkley and seemingly has an edge based on the first three preseason games. The choice will likely come down to Driskel's upside and consistency this preseason weighing against Barkley's experience.

"It's hard to say," Driskel said when asked if he has a sense of where he stands. "I feel good about myself, I feel good about my development and I just feel comfortable back there. That's all you can ask for, and I feel I put some good things on tape, but Thursday will be another opportunity to do so, and I'm just looking forward to it."

The preseason finale against Indianapolis on Thursday could tip the scales that waver between Driskel and Barkley as well as in several other battles for final roster spots.

Teams must cut their rosters down to 53 players by Saturday afternoon, and the Bengals have some tough decisions ahead. It's a good sign for a player if he doesn't play Thursday against the Colts -- most of the starters are expected to sit out, and opportunities will be plentiful for those still trying to prove they belong.

"It's been a contested roster, which this is about," Lewis added. "This is the National Football League, and you have to earn opportunity. Just because you were here a year ago doesn't mean you necessarily get to stay this year."

In Driskel's case, the Bengals have an idea what he brings as someone who has been with the team the past two years, but he's never played a regular-season game. He was on the roster, unused, the entire 2016 season and spent most of last year on injured reserve after breaking his thumb in the preseason finale.

Barkley has appeared in 11 games with three different teams the past five years, including six starts for the Bears in 2016.

Despite the difference in experience level, Driskel has been the more consistent of the two players and completed 24 of 38 passes (63.1 percent) for 334 yards. Barkley has completed just 17 of 33 passes (51.5 percent) for 230 yards. Both have thrown one interception and one game-winning touchdown.

Driskel is hoping he has done enough with his increased opportunity this preseason to earn the spot.

He is practice-squad eligible, whereas Barkley is not, but if the team goes with Driskel, rookie Logan Woodside could still be an option as the No. 3 quarterback.

"I've taken a lot from my time here, whether it's from the different coaches that have been here or things from Andy (Dalton) or AJ (McCarron) or even Matt (Barkley), but I don't think there's any substitute for reps, and I've gotten more this year than I have in the past, and I feel like I've taken advantage of them," Driskel said. "I'll get a good opportunity to play a fair amount on Thursday and really hope to end the preseason on a good note."

Another big decision looms in the last spot at wide receiver.

The Bengals likely will keep six on the roster, and rookie seventh-round pick Auden Tate could be pushing third-year player Cody Core or even Alex Erickson (if the team decides Darius Phillips is the better option as a returnman) for the last spot. Tate, at 6-foot-5-inches and 228 pounds, is a big target who has been impressive in practices but managed just one catch during the preseason -- a 33-yard touchdown against Chicago.

"I feel I've done pretty well," Tate said. "There are still things I need to work on, but I like where I'm at. I just have to keep going, block a little better on special teams, and I can't have any more drops."

It could help Tate that Cody Core has been injured and isn't expected to play on Thursday. So could his efforts in the kicking game, if he can show enough to come close to what Core does on special teams.

Special teams can sway a decision one way or the other if the position battle is close.

"It's got to be a blend for those that have a special teams role," Lewis said. "It's got to be two-fold. Offense and defense, we have a certain feel, and there's always a feel that (special teams coordinator) Darrin (Simmons) would prefer, and then a lot of it comes down to what's the best for the 46 (available on game days)."

A couple of defensive back positions are unsettled with Tony McRae battling injuries early in camp and Josh Shaw struggling, and the last linebacker job could come down to the Bengals deciding to go thin at other spots, especially with Vontaze Burfict suspended the first four games. Brandon Bell seems to be the guy looking from the outside if that's not the case.

Lewis offered praise for Hardy Nickerson on Tuesday, and he's shown enough on special teams to earn the nod.

At defensive line, Josh Tupou and Andrew Brown have been hurt by injuries that sidelined them the first two games of the preseason, but both returned Sunday at Buffalo and should get more playing time on Thursday to decide their fate.

RELATED: Andy Dalton, John Ross give Bengals fans something to dream about

Tupou, an undrafted college free agent in 2017, played in one game last year. Brown is a rookie fifth-round pick this year.

"It was tough when I got hurt earlier in camp, but I've just been working to get better in rehab with the trainers and just trying to make the most of every opportunity I have with this last game and this one coming up," Tupou said. "Whatever happens after that, I'll just leave it up to them.

"I just try to get better every day and that's all I can do, that's all I have control over is getting myself better and whatever happens happens."