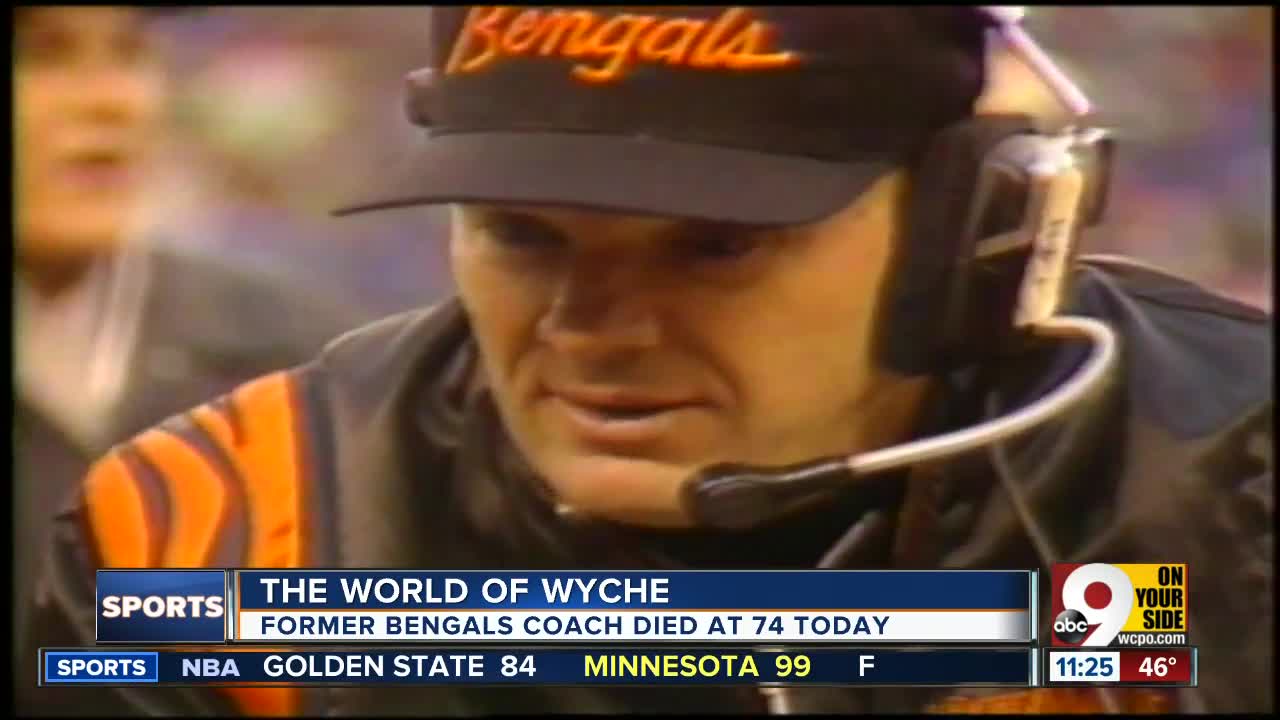 Trouble always seemed to seek out Sam Wyche. The two often met often behind a microphone and in front of a camera. Byt Sam was actually seking solutions. 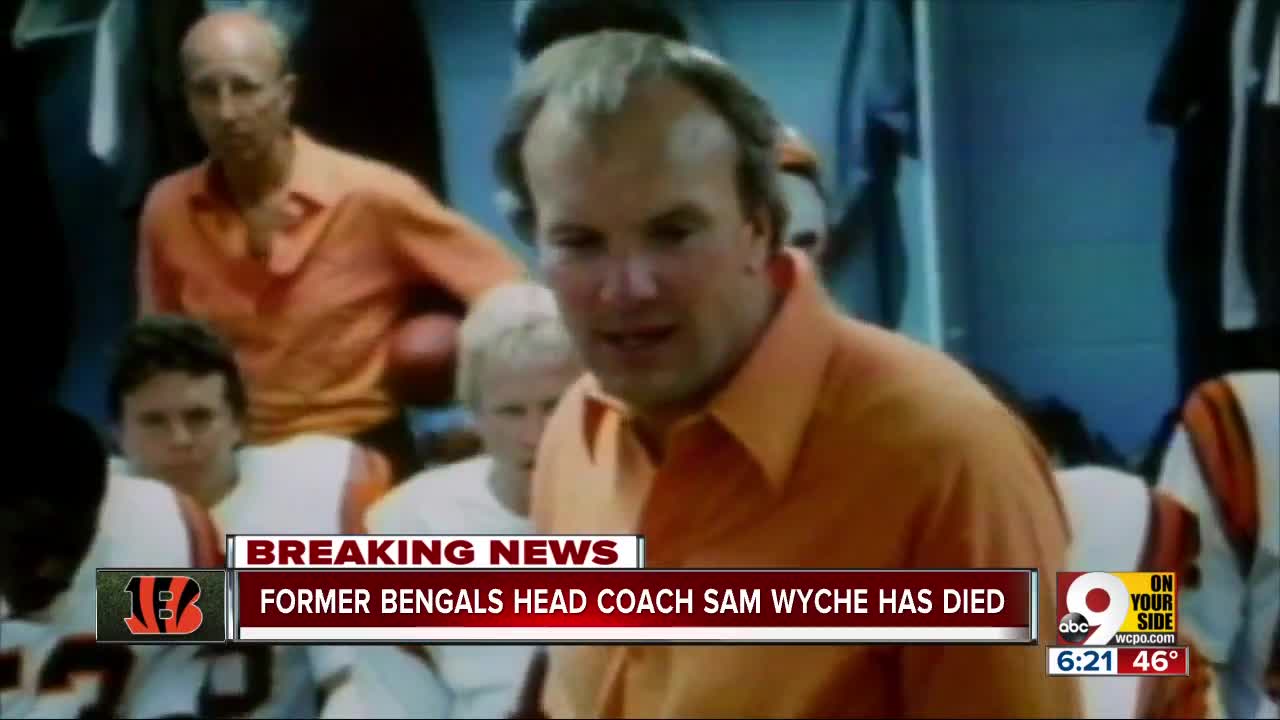 "It was in his liver and he just went really fast," said Zak Wyche. "He was able to walk around Saturday with a walker and then the next morning he was unresponsive."

My coach, my mentor. He was an innovator and took chances that no coach ever would. He was an even better human being. He loved his players and always kept it interesting. He taught me how to be a NFL QB. My heart breaks for his wife Jane his kids Zak and Kerry. #onelastwhodey pic.twitter.com/oI8efRQIui

Wyche, who died at 74, coached the Bengals from 1984 to 1991, including their second and last appearance in the Super Bowl after the 1988 season and their most recent playoff win in 1991. He also reminded Bengals fans in a famous moment in December 1989 that they "don't live in Cleveland."

Years later, Wyche recalled that the moment led to some goodwill with Browns fans when he agreed to sit in a dunking booth for a Cleveland charity and former Browns quarterback Bernie Kosar dunked him with a football.

Wyche was an NFL head coach for 12 years overall (1984 to 1995). He coached Tampa Bay from 1992-95. He served four years as an assistant coach under Bill Walsh with the 49ers and one year as head coach at Indiana University before replacing Forrest Gregg in Cincinnati.

"Sam was a wonderful guy," Bengals president Mike Brown said in a statement. "We got to know him as both a player and a coach. As our coach, he had great success and took us to the Super Bowl. He was friends with everyone here, both during his tenure as head coach and afterwards. We not only liked him, we admired him as a man. He had a great generosity of spirit and lived his life trying to help others. We express our condolences to Jane and his children Zak and Kerry."

Wyche had an inspirational journey when he recovered from a heart transplant in September 2016. He told WCPO in 2017 he would ride a bike 15 to 23 miles multiples times a week from his home. He also enjoyed being around his family and watched his grandson, Sam, play linebacker for Moeller during the 2017 season.

“He would do anything for anybody," said Zak, a St. Xavier assistant football coach and 1989 Wyoming High School graduate. "He’s very selfless. He’d loan people his truck for them to use. He would take care of people in need. He would let people to stay in the house if they were having trouble. He would do things for everybody else."

Wyche spoke fondly of his time with the Bengals. He enjoyed discussing the famous moment in December 1989 when he reminded Bengals fans they live in Cincinnati and not Cleveland.

The Bengals were losing to the Seattle Seahawks and some fans were a tad disgruntled the way the game was going, enough so that they started throwing snowballs at Seahawks players, according to a 2017 WCPO story.

It got to the point that the referees stopped the game.

Sam Wyche grabbed the on-field microphone and let the fans have it. It lasted all of nine seconds. He told fans to point out the snowball-throwers and they would be ejected.

But he closed with one thing that will live forever in Bengal lore: "You don’t live in Cleveland, you live in Cincinnati.”

Wyche’s comment was a shot at the Browns' Dawg Pound fan section in Cleveland. Wyche said the fans in the Dawg Pound threw batteries and half-filled beer cans at his players during warmups.

Wyche's no-huddle offense in the 1980s is still remembered today.

I always enjoyed being around Sam Wyche. Heck of a guy and a brilliant offensive mind. People thought he was crazy running the no-huddle as a base offense back in the 80s. Next time your team gets a penalty for too many in the huddle, think of Sam; his use of it got it outlawed.

Wyche also spoke fondly of being a member of the original Bengals as a backup quarterback in 1968. The team played its home games at Nippert Stadium before Riverfront Stadium.

Wyche had a free-agent tryout at St. Xavier High School in early '68. The Bengals quarterbacks coach that year was Walsh. The head coach was Paul Brown.

Walsh and Brown were there at St. Xavier that day. It was Lou Holtz who made the call to the Bengals for Wyche to get a tryout.

“During the workout it was kind of a damp and cold day – maybe January or February,” Wyche told WCPO in 2017. “We had about 15 guys working out. I was the only quarterback.”

Walsh was impressed with Wyche’s athleticism that day.

Brown later called Wyche from the Bengals temporary office at the Hilton Netherland Plaza Hotel and offered him a one-year deal for $11,000.

Wyche was ecstatic. He couldn’t wait for the opportunity to start with training camp that July.

“I can remember going down to the phone booth on the corner and putting the dime in there,” Wyche said. “I called my newlywed wife and my first words were, ‘We are rich.’”

RELATED: Sam Wyche was family man and passionate for those in need.