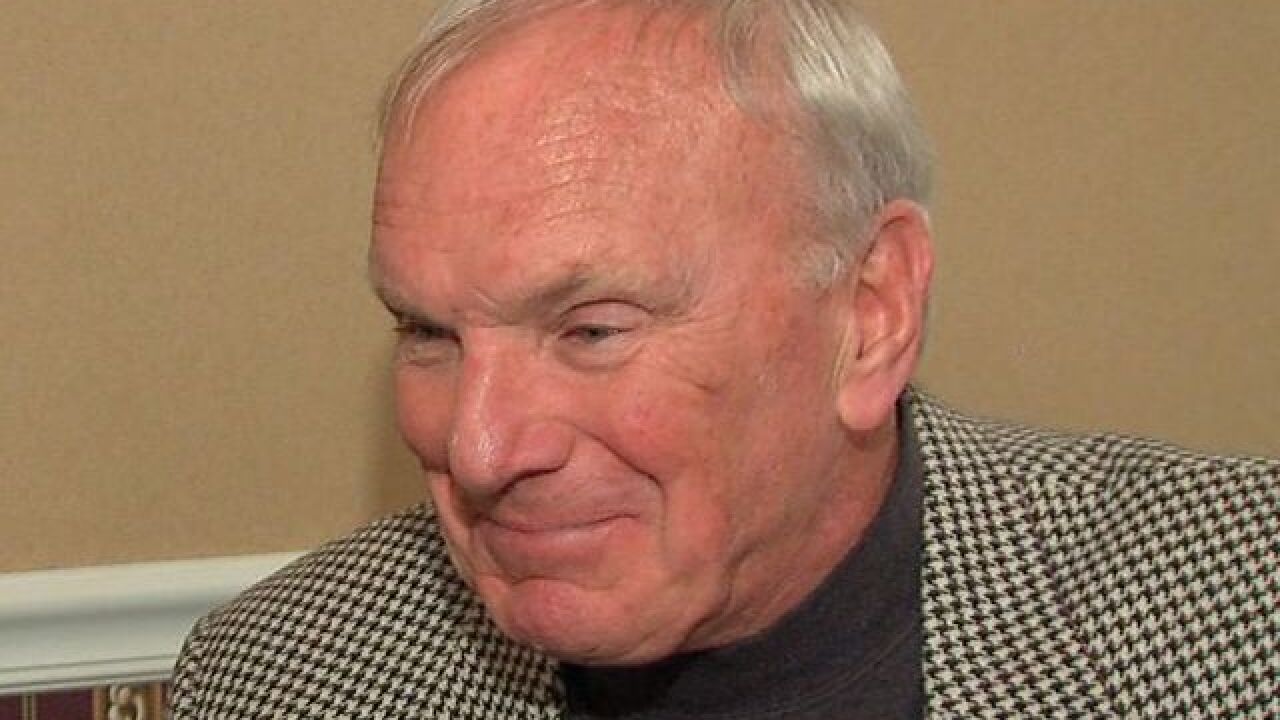 <p>Sam Wyche was the speaker at the Oak Hills High School Sports Stag in 2104.</p> Wyche's grandson plays football for Moeller, and on the same day the former coach was told he had only a week to live, the team gathered around the statue of Mary at the school Monday and prayed that a donor would be found.

"Everything went off without a hitch," said the former coach's son, Zak Wyche. "There were no unexpected surprises, and he's doing good."

"The doctor did say that when they shocked the heart and took him off of the heart-lung machine everything functioned perfectly," Trumpy said.

"It just shows the power of prayer is quite remarkable," Moeller senior Will Pappalardo said.

Some of the players on Wyche's Super Bowl XXIII team told WCPO they had been praying for him, too.

"He meant a lot to a lot of us who played for him - especially me," said Mike Martin. "He had a lot of confidence in me and you never want anyone to be suffering with anything, especially dealing with health."

Martin and Hall of Famer Anthony Munoz were at Paul Brown Stadium Tueday talking to youngsters about character - something they say their coach demonstrated daily.

"Sam was the best," said Munoz. "We've been praying for Sam and it's good to hear he's doing well."

Wyche is ever aware his second chance came through someone else's loss, according to Trumpy. Speaking to Cunningham, Trumpy said Wyche has no idea who the donor is, no idea what caused the donor's death.

"In fact (Monday) morning when we were talking, he got pretty morbid about it," Trumpy said.

"'I'm sitting here hoping for life, but my hope for life is death for somebody else,'" Wyche said, according to Trumpy.

"There is a process that goes with accepting someone who has died and taking their organs," says cardiologist Dr. Louis Benson Louis IV. In fact, University of Cincinnati Medical Center brings in psychologists to help with that aspect of recovery, he said.

"Most people, while they respect the sacrifice the donor family made, they're incredibly grateful to have their lives back," said Louis.

"It's indescribable," said Andi O'Malley with LifeCenter.  And she says she hopes Wyche's second chance at life will lead to more donor registration.

"When a beloved icon such as Sam Wyche who is so respected in our community finally gets that second chance at life, I think that that communicates to our community the importance of organ and tissue donation," O'Malley said.

You can register to be an organ donor on the LifeCenter website.

While Dr. Louis has not seen Wyche as a patient, he says one of his patients would typically  be up and moving in the first 24 to 48 hours and out of the hospital and moving on with his life within a week or two.