Will attend Moeller at Hamilton game 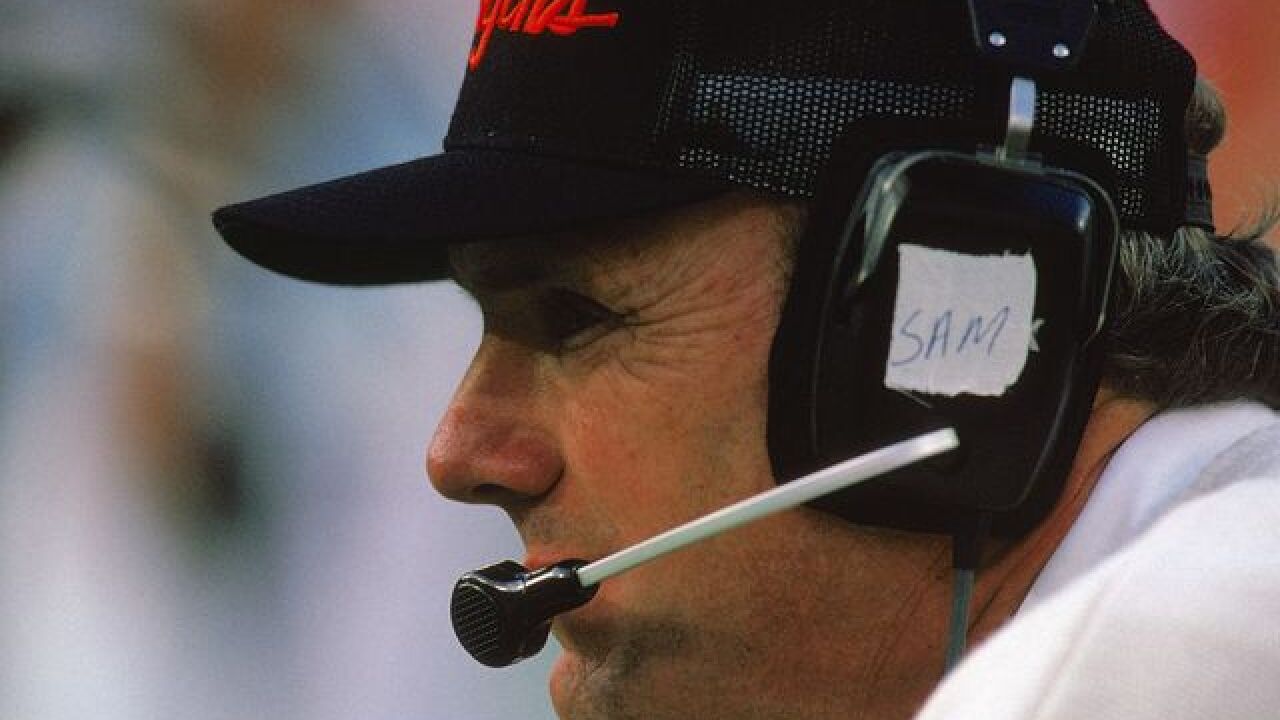 SYCAMORE TOWNSHIP, Ohio -- Moeller senior Sam Wyche enjoys wrestling and playing football. He has aspirations of working for the FBI one day.

You don’t need an informant to understand how much the 18-year-old senior linebacker also proudly carries his family’s surname while competing on Montgomery Road.

It’s no wonder why the inspiring words of his grandfather, former Bengals coach Sam Wyche, make such an impact during each weekly phone conversation.

“He’s a great example,” the younger Wyche said. “I love trying to live up to the example he set for me. He just tells me ‘finish everything’ and ‘don’t let your head get down.’”

Coach Wyche and his grandson have plenty to prove in their own way these days.

The elder Wyche, 72, is doing very well after having a heart transplant in September 2016.

He enjoys riding his bike anywhere from 15 to 23 miles multiple times a week from his home in Pickens, South Carolina. His heart is strong and he looks forward to the exercise. He's had five biopsies and everything has checked out fine.

"The bike has been really good for me," Wyche said. "According to the doctors, I am way ahead of schedule."

While on a much less serious health scale, the younger Wyche tore the anterior cruciate ligament in his left knee in the first half against Huber Heights Wayne in Week 2 last season.

He had surgery after Week 7 and it forced him to miss his entire wrestling season after he was a state qualifier as a sophomore. It was a tough road mentally too as he worked in physical therapy at Moeller and Beacon Orthopaedics.

But the younger Wyche, who lives in Loveland, is eager to have a strong start and wants to impress college football recruiters early this season.

“I can’t wait to show everybody what I have and to prove myself,” the younger Wyche said. “I only had a half season (of football) last year so I can’t wait to make some noise.”

Zak Wyche -- the Bengals coach’s son and linebacker’s father -- can laugh about the timing now. But the two guys named Sam were linked in unfortunate circumstances around Labor Day last year.

“My dad was in the hospital and I was talking to him and said, ‘Sam tore his ACL,’” explained Zak, who teaches at Purcell Marian.

“All of a sudden the phone just went like dead and I was like ‘ I just killed my dad.’” He was on medication and it just knocked him out right in the middle of the conversation. I kept calling him back -- it was a little scary. I kept hearing the phone that he was trying to pick it up.”

Coach Wyche, who coached the Bengals from 1984 to 1991, has made significant strides since last fall. He was planning a trip to St. Louis last week to promote organ donation among college students.

While Wyche attended some Moeller games a few years ago while his grandson was an underclassman, he’s more recently followed his progress through Hudl film.

While nothing is finalized, Wyche is hoping to attend some of the Bengals’ 50th anniversary festivities at some point too.

The younger Sam, who turned 18 Sunday, was born four years after his grandfather’s final NFL head coaching job in Tampa Bay in 1995.

But the linebacker has watched old NFL footage and the journey to Super Bowl XXIII with his father. To Sam and his elder sister, Madeleine, a junior at Clemson, and younger brother, Jack, a eight-grader at St. Michael Parish in Sharonville, Coach Wyche is simply "Poppie."

Zak, a 1989 Wyoming High School graduate who played at Carson-Newman, remembers the spotlight his family had in the 1980s. In turn, he had an early conversation with his eldest son about keeping a perspective based upon the name recognition.

“It’s tough,” said Zak, who played defensive end and tight end in high school. “With that name people expect a certain thing out of you. You are always trying to live up to other people’s expectations. I said, ‘Don’t worry. You do the best you can do. You make your own name.’”

Moeller coach John Rodenberg was impressed with the younger Wyche’s attitude throughout the winter. Even when there were times the linebacker couldn’t work out, he was in the weight room supporting his teammates. He previously played quarterback as a freshman but changed positions as a sophomore.

“He has great perseverance,” Rodenberg said. “I think he has handled the name well. He hasn’t let it to get to him. He has a great work ethic which I think helps him get by.”

Coach Wyche is proud of his grandson for who he is and says young Sam is one of the hardest workers he's known, all family aside.

“He’s a good athlete," Wyche siad. "More importantly he’s a good student. That is going to carry with him beyond graduation.”