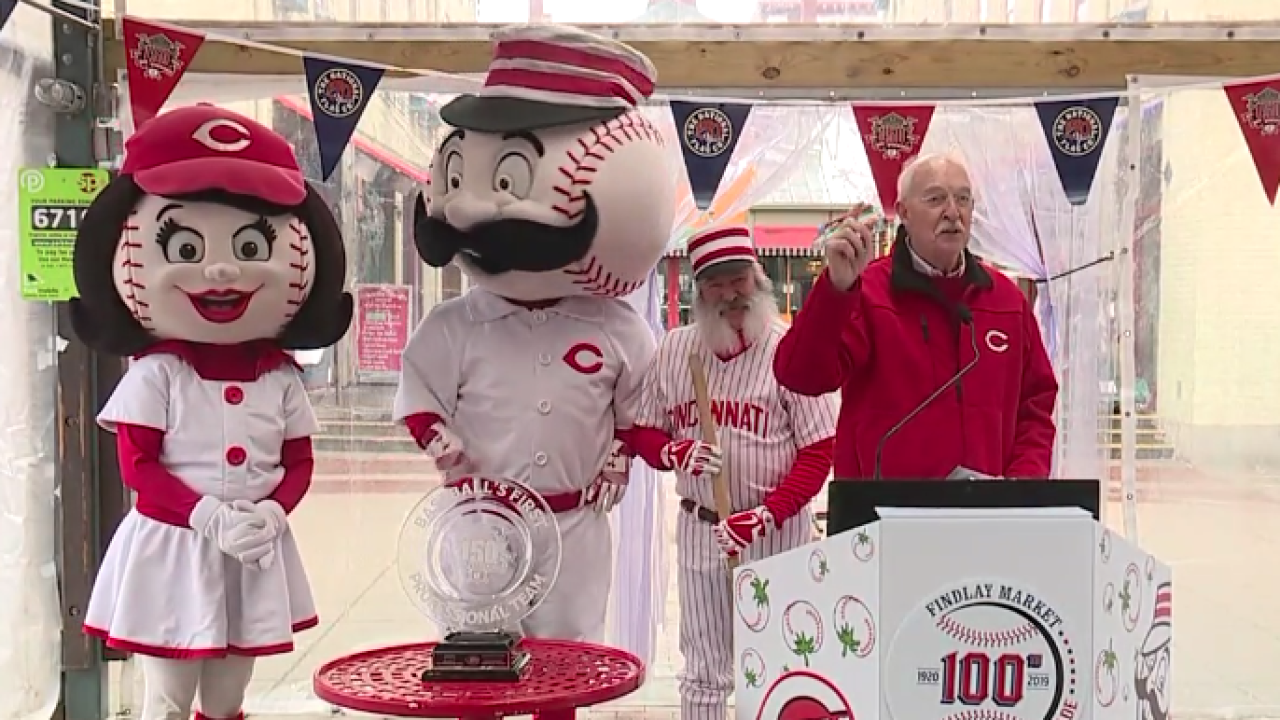 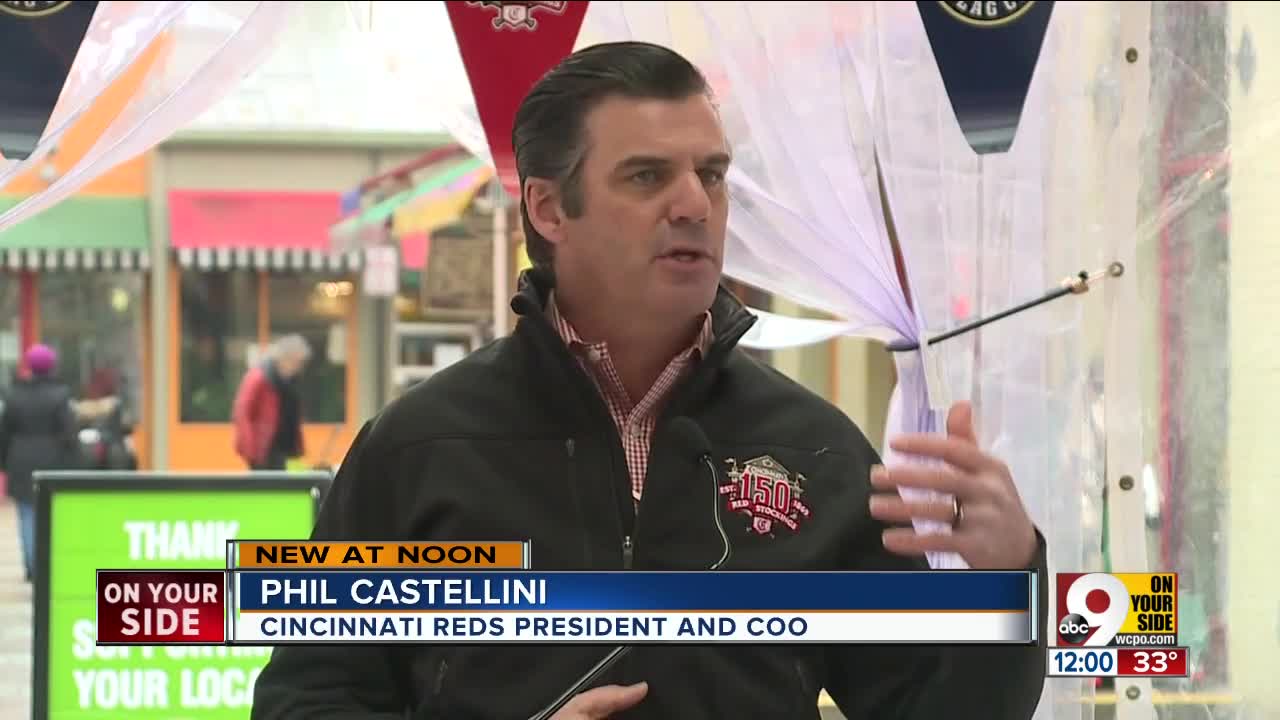 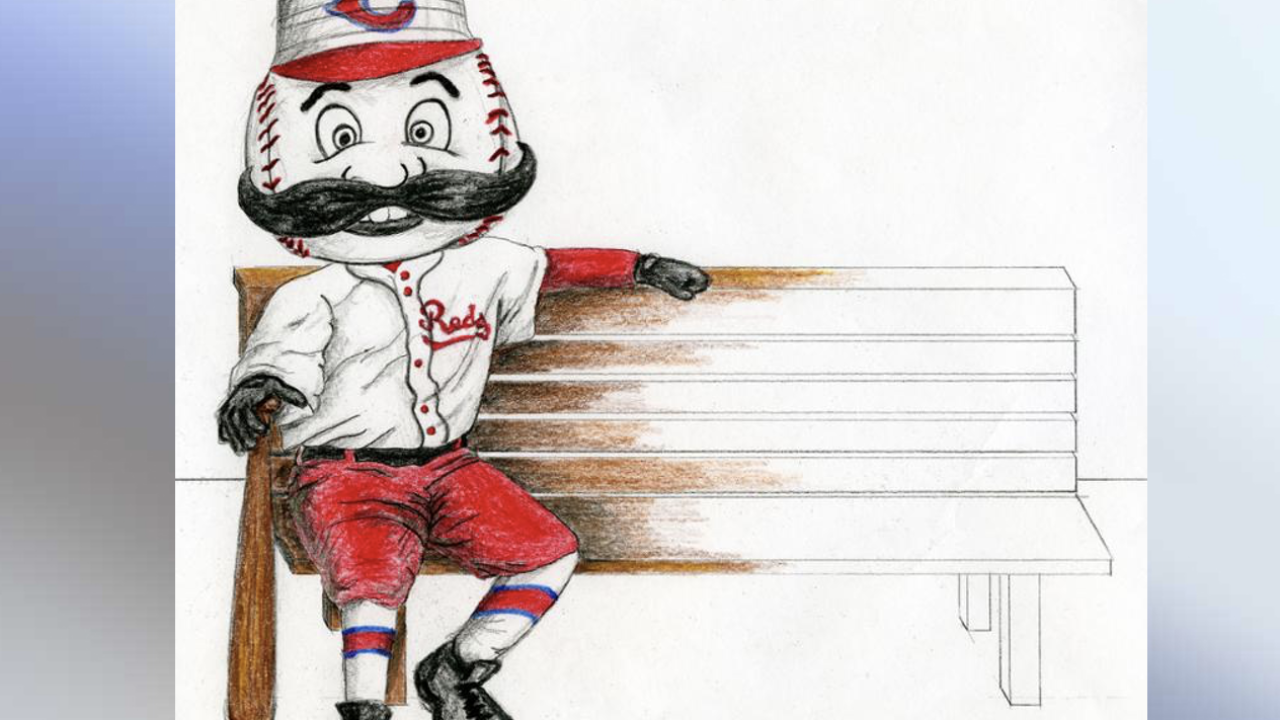 CINCINNATI — If you’re in Cincinnati in 2019, you’re gonna know that the Queen City is celebrating baseball.

“And especially if you come to a Reds game, we want to make sure you know it’s the 150th anniversary,” said Phil Castellini, Cincinnati Reds president and COO.

Officials from the Reds and Findlay Market announced several new events and initiatives surrounding the milestones that will continue beyond Opening Day.

“You can’t tell 150 years of history in one day or one home stand or even month, so we’re really going to do that all season long,” Castellini said.

Remember the mustache benches? Fifteen new benches will be placed throughout the Tri-State. These will be modeled after Crosley Field dugout benches featuring Mr. Redlegs in 15 different throwback uniforms. Those same uniforms will be featured on a new Reds float in the parade, and players will wear the uniforms during 15 games this season starting on May 4.

Castellini said all fans are invited to the Reds Rockin’ 150 — a free baseball birthday party on July 5 featuring bands and a fireworks show. The Reds will also build two little league fields in honor of the anniversary celebration; a field at Ross Park in St. Bernard, and a field at Bellevue Vets in Bellevue.

The redesign and reconstruction of the Reds Hall of Fame and Museum is expected to be complete by Opening Day as well, Castellini said.

The Cincinnati Reds announced in February that Commissioner of Major League Baseball Rob Manfred will serve as grand marshal of the parade.

Manfred will ride in the parade with Johnny Bench who will catch the first pitch. Eric Davis will throw the first pitch, Joe Morgan was named captain of the game and Bronson Arroyo will deliver the game ball.

Parade chairman Neil Luken made several special announcements about what to expect during the 100th Opening Day Parade.

Ohio Gov. Mike DeWine is one of the guests in the parade. Among other highlights: Disney is bringing a “Dumbo” float, 18 bands are signed up so far and the Budweiser Clydesdales will trot through downtown Cincinnati.

“If you’re 2 years old or 102 years old there’s something for everybody, and you don’t have to wait all day to see something,” Luken said.

“The Reds do more than present a baseball game, they put on family entertainment that everybody absolutely loves,” said parade spokesperson Jim Scott.

Based on players’ performances during spring training, Castellini said fans should expect Opening Day energy throughout the season.

READ MORE: Many questions face Reds as spring training gets underway in Arizona

The festivities begin with the 100th Opening Day Parade at noon on March 28. The Reds face the Pittsburgh Pirates at 4:10 p.m.

Click here for more events planned for the 150th anniversary of baseball.