'Whose streets? Our streets': How disrupting Cincinnati traffic has steered George Floyd protests

And the task of marching through a car-heavy city 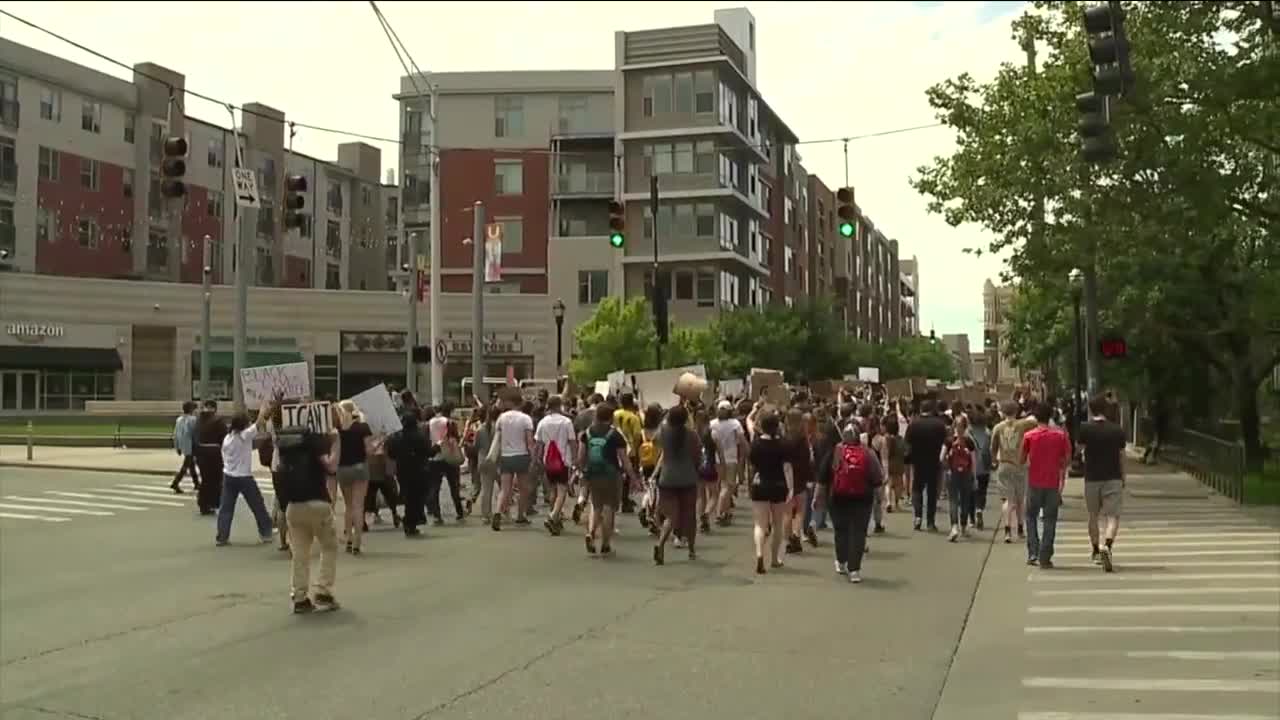 With Cincinnati's well-documented history of increased risk to people walking and biking through its neighborhoods, the protest march can pose extra challenges. But along with those challenges, taking to the streets can be all the more empowering.

CINCINNATI — When University of Cincinnati student Myriam Wane organized one of her first demonstrations through Clifton Heights, she and her fellow organizers were joined by more than 500 people ready to take to the streets and march.

"We marched a very nice perimeter around UC, through Martin Luther King (Drive) and Calhoun (Street)," Wane said of the demonstration protesting police brutality and the deaths of George Floyd and other people of color killed during confrontations with law enforcement. "A lot of the shops on Calhoun had shut down to support us."

Marching through a city's streets is a time-tested strategy for social demonstrations and public protests, and Wane said the protests she's organized in Cincinnati in recent weeks are no exception.

"It's definitely a power move, for sure," she said. "When you have a large group of people taking up the street, and drivers have no choice but to yield to those pedestrians."

In a city like Cincinnati -- with its well-documented history of increased risk to people walking and biking through its neighborhoods -- the protest march can pose extra challenges. But along with that, protesters like Wane said they've found taking to the streets can be all the more empowering.

On June 3, a protest outside Cincinnati City Hall became the stage where the long-standing drama between Cincinnatians on foot and those behind the wheel played out.

Demonstrators formed a line in and behind the crosswalk spanning Plum Street at Ninth Street -- blocking traffic -- when surveillance video showed that, while nearly every driver detoured around the crowd, one motorist appeared insistent on trying to move his vehicle through the line of protesters.

The incident unfolded in less than 30 seconds: The video shows one protester moving out of the way less than a second before the driver would have struck her with his BMW. After another man stepped in front of the car -- in an apparent attempt to stop it -- demonstrators then began to gather around the vehicle's hood. At that point the driver jolted the car forward twice, pushing some people out of its way. The driver then quickly reversed the vehicle and drove west on Ninth Street.

Cincinnati police Lt. Steve Saunders said shortly after the incident that the driver began moving toward the line of protesters after his traffic signal switched from red to green, which gave him the right-of-way. No one was injured during the confrontation, and no charges were filed against anyone involved.

That incident -- combined with the new Black Lives Matter mural spanning Plum Street outside City Hall -- raised a question for City Councilman Jeff Pastor about how that space should be used.

"When you go to other cities... you see pedestrian plazas outside government buildings all the time," Pastor told WCPO. "This is the people's house. This is a government-owned building. Why not have a pedestrian plaza where people can literally come, have a conversation, engage with their city leaders, and then how can we duplicate this around the city of Cincinnati?"

The June 3 incident at Plum and Ninth streets represents for Pastor a larger pedestrian safety problem throughout the city -- one he said is a lingering consequence of longstanding transportation policies that favored moving high volumes of cars through historically poor, black neighborhoods to the detriment of the people who live there.

A pedestrian plaza outside City Hall would send a message, Pastor said: "When you put up a public plaza, a pedestrian plaza, it is literally stating that the government is moving in this direction, that pedestrians -- who pay taxes, by the way -- have a right to walk in safe streets."

After City Council passed Pastor's motion to establish the pedestrian plaza, though, City Manager Patrick Duhaney issued an FYI memo raising logistical concerns. Among them were street access to nearby businesses -- including an auto repair and tow shop -- public alley and parking access, and potential disruptions to Cincinnati Metro bus service, which has a stop right outside City Hall.

Traffic volume was an additional concern for Duhaney, as the road serves to connect drivers to the Duke Energy Center, the Sixth Street Expressway, U.S. 50 and Interstate 75. According to his memo, the road carries up to 5,000 vehicles per day and as many as 500 per hour during the evening rush.

"Without further study, the full impact of traffic diversion resulting from the closure of this connection is unclear, and it may lead to significant off-site problems," Duhaney wrote.

'Whose streets? Our streets'

For the protesters blocking Plum Street that afternoon -- as with all protests that take over street space -- disruption was the point.

"If people are on the sidewalks, a lot of people wouldn't really pay attention," said Majd ElSabbagh, a Northern Kentucky University student and protest organizer. "But once you disturb someone's time or you delay them from work, then you have their attention.

"By taking up the streets, you're forcing people to look at you, 'I'm here, and I want to be heard,'" ElSabbagh said.

According to the Cincinnati Police Department's website, only crowds of 3,000 people or more, or those involving the sale of alcohol on public property, require a special permit to gather.

For Aloni Welker -- another UC student and protest organizer -- making a human chain across a city street is a common part of social demonstrations. As part of a different protest days before the Plum Street incident, she was part of a chain of protesters linked arm-in-arm across a street adjacent to Washington Park in Over-the-Rhine.

"Taking up the streets... it is the best way to show your voice, being in public and showing your opinion -- especially in our business sectors where people are trying to go about their day," she said. "It's hard to ignore these massive groups of people."

Welker said her resolve was strengthened the night of one specific protest outside the Duke Energy Center, following a now-notorious City Council budget committee hearing. During that meeting, chairman David Mann abruptly ended public comment after the crowd of speakers began booing a citizen speaking in support of fully funding the police department.

She remembers seeing individuals form chains across Elm Street to protect the unexpected surge of people gathering outside the building after Mann shut down the meeting.

"It was interesting to see how many white allies were willing to stand there and be the barricade," Welker said. "It was great to see their support while people of color and black people...could gather."

Wane said one tactic she has used during protests is, as the crowd is still gathering, to take a megaphone and engage nearby drivers passing by or trying to pass through.

"Before the protest even starts, I take a few people with me, and we go out on the street, and we literally yell at the cars," she said. "We get the people driving by engaged because this isn't only for the people here. It's for the people surrounding the area. And people were responsive, like honking."

Early protests outside the Hamilton County Courthouse also saw protesters lining both sides of Main Street, with some drivers passing through, honking horns and revving engines in support of the demonstration.

Welker said she has seen mixed results as far as Cincinnati police assisting protesters marching by stopping traffic as the crowds pass, depending on the neighborhood.

During a march she attended in Clifton, she said, police escorted the marching crowd through the area, but she did not see that same attention paid to Downtown or Over-the-Rhine crowds.

WCPO has reached out to police officials for more information on its procedures for ensuring the safety of protesters on the streets and will update this story when we learn more.

But despite the department's general tolerance of people marching through city streets, circumstances changed after dark, when city-ordered curfews went into effect for several consecutive nights.

The result of the curfew was that it became a crime to be out on the streets, and police arrested hundreds during those first few nights on curfew violation charges.

"(Curfew) was absolutely a violation of our rights as citizens," Wane said.

Wane isn't alone in thinking so. Earlier this week, the Cincinnati Mass Defense Coalition filed a motion with the city demanding that those curfew violation charges be dropped, claiming Mayor John Cranley's curfew order was unconstitutional.

The city solicitor's office said in June it would consider dropping those charges on a case-by-case basis, but would not categorically drop them all, after some on City Council began asking questions about the arrests.

'More than a mural'

Pastor said he hopes a pedestrian plaza outside City Hall would jump-start more thinking about how to make Cincinnati's streets safer for walkers and bicyclists -- protest or not.

"Solidarity is more than a mural or a spot downtown that is closed off," she said. "Not to say that those aren't great things, but we are definitely asking for more."

She also emphasized that she and others are not done protesting, and to listen for the chant, "Whose streets? Our streets."

"When you say 'our streets,' you better mean it," she said. "You are not doing anything that is not within our democracy by occupying the streets right now."