Protester: 'You could tell he was angry' 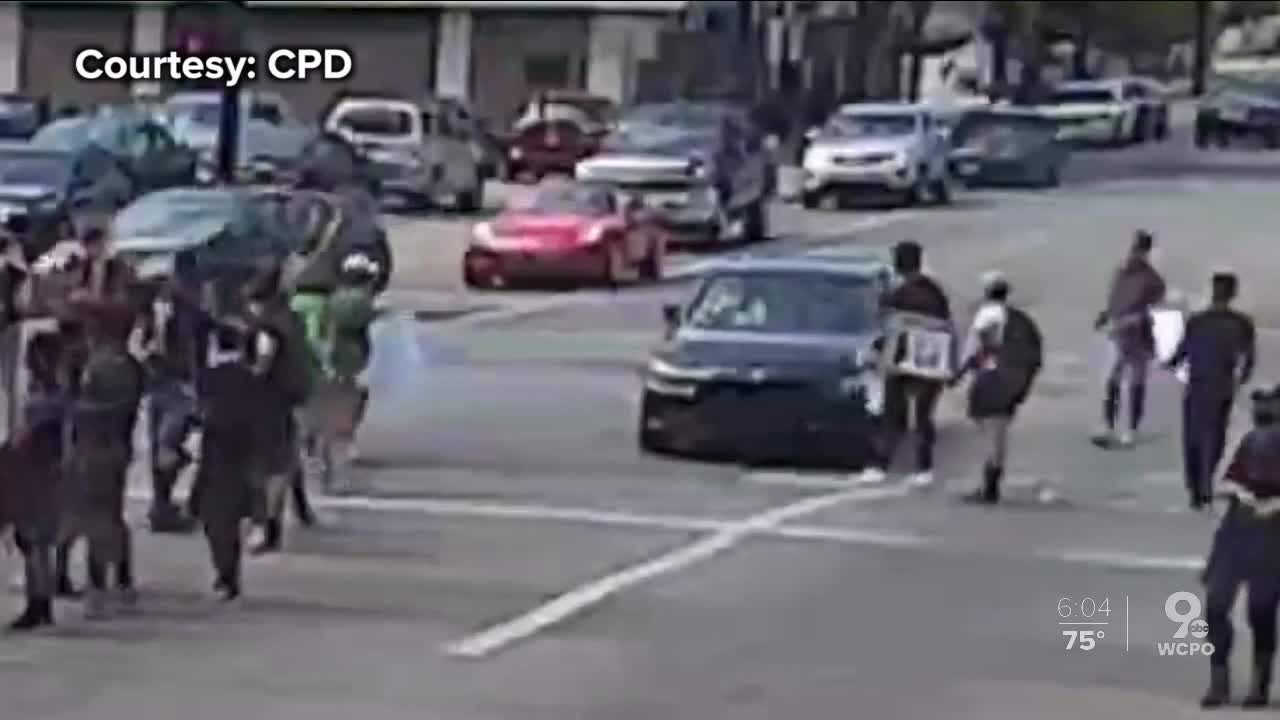 Someone drove a car through a line of peaceful protesters assembled Wednesday afternoon outside City Hall.

CINCINNATI — Someone drove a black BMW through a line of peaceful protesters assembled Wednesday afternoon outside City Hall. No one was injured, but some were pushed backward as the car attempted to force its way through a crowd before backing up and driving away.

Earlier today we reported that a driver of a black BMW drove toward demonstrators that were in the intersection of Plum & 9th St. This is a recording from street cameras. If you were at this intersection & believe this vehicle intentionally struck you please file a police report pic.twitter.com/NM30os8J2g

The incident unfolded in less than 30 seconds around 4:15 p.m. Wednesday. The car left the scene without being stopped.

Police officials initially indicated that it did not appear the driver had the intention of striking any of the protesters, but then later advised anyone who believed the driver intentionally struck them to file a report.

According to Cincinnati Police Lt. Steve Saunders, the driver began moving toward the line of protesters after his traffic signal switched from red to green, giving him the right-of-way. In order for an investigation to move forward, someone who was hurt or injured would need to come forward to file a report. Saunders added that in order for a crime to have been committed, bodily or property damage would have to have occurred.

The video shows a black BMW was sitting at an intersection before the driver began moving the car toward demonstrators standing in and behind the south crossing at the intersection of Ninth and Plum streets outside City Hall. One woman moved out of the way less than a second before the driver would have struck her with the vehicle. After another man stepped in front of the car -- in an apparent attempt to stop it -- demonstrators then began to gather around the car's hood. At that point the driver lunged the vehicle forward twice, pushing some people out of its way. The driver then quickly reversed the vehicle and drove west on Ninth Street.

The video shows a loose crowd in the street at the time of the encounter but also that a large portion of the sidewalk and public gathering space outside City Hall had been barricaded.

Saunders told WCPO that he believed "common sense" would dictate to the driver not to move toward the people demonstrating in the street.

WCPO interviewed multiple protesters at the scene not long after the confrontation. Denorver Garrett said he was one of the people who approached the car after it initially approached the line of demonstrators.

"Ran up to the car and was like, 'Yo, go go.' Then you could tell he was angry. You could see in the window he was like, 'I'm going through here,'" he said. Garrett said the vehicle never touched him, but that it was close.

Klarke Griffith was another demonstrator who witnessed the incident.

"We weren't doing anything. We're peaceful over here, and even if we weren't, why are you trying to hit people?" she said. "We're just gathered here for justice and change."

Saunders said the driver was male, but the vehicle was registered to a woman living in Kentucky.

Saunders said there were roughly 20 officers standing outside City Hall at the time of the incident, some speaking with protesters. Officers interviewed multiple people at the scene, but no one reported that they were hurt, he said. CPD later stationed a crusier at the intersection to protect protesters.

An unmarked police vehicle followed the driver in order to obtain the license plate number, but the officer did not have clearance to stop the vehicle, Saunders said.

The night before Wednesday's incident, protesters outside the Hamilton County Courthouse at one point turned the demonstration's attention to Main Street -- with a crowd on both sides of the street -- cheering for drivers as they drove by and showed support for the protests through honking horns and revving engines.

Some drivers stopped and sat for several seconds, while others took multiple laps through the parted crowd.