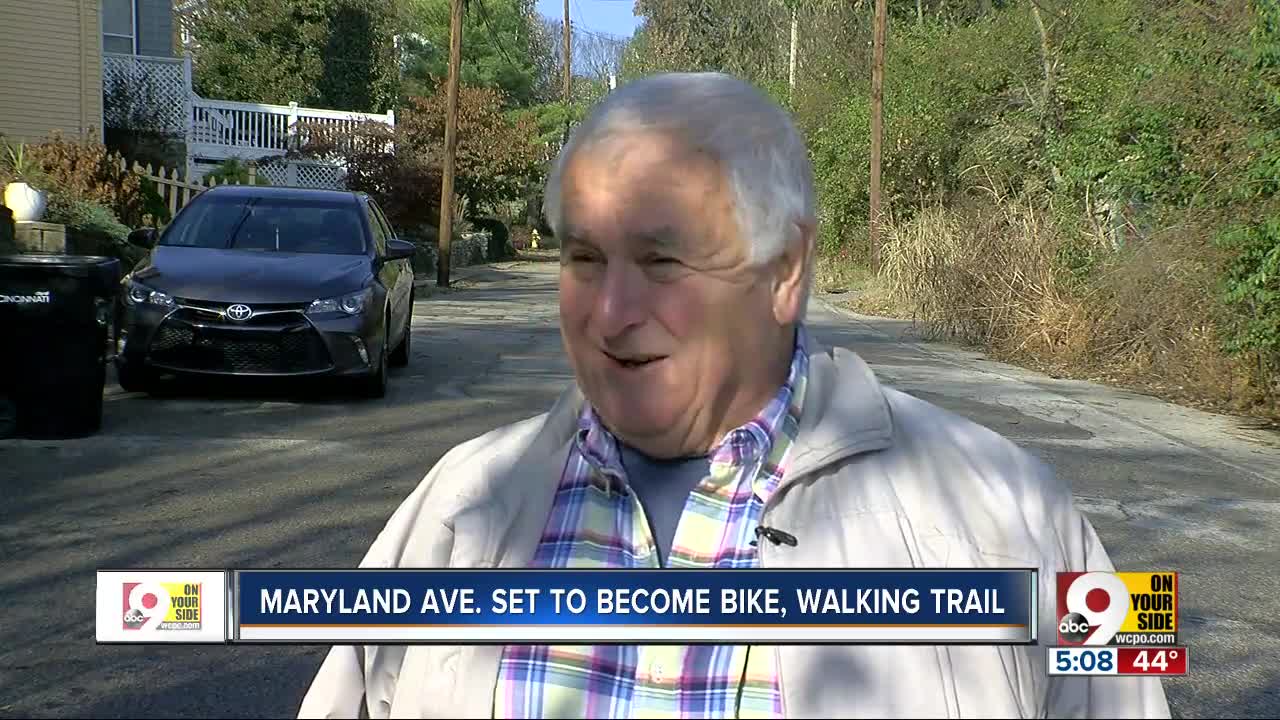 More than 20 years ago, the city closed roughly a quarter-mile stretch of Maryland Avenue due to hillside slippage. Now it's been cleared of brush overgrowth and debris as a new connection for people walking or riding bicycles.

CINCINNATI — A long-neglected stretch of road between Lower and East Price Hill is poised to become a vibrant new connection for the two West Side neighborhoods -- just not if you're in a car.

In fact, the road had to become impassable for auto traffic in order for it to get its makeover.

More than 20 years ago, the city closed roughly a quarter-mile stretch of Maryland Avenue due to what remains a perennial problem across Cincinnati: hillside slippage. It was right around the time Dan Frondorf moved into a house just up Maryland in East Price Hill.

Frondorf said in the years since the road's closure, he would see neighbors still using the roadway, hopping the guardrails blocking vehicles to walk their dogs or get down the hill by bike. He also began noticing other, less welcome activity.

"This is a dead-end at both ends that would attract those seeking to operate in the darkness," Frondorf said. "So sometimes you'd have trouble with prostitution and drugs down there."

Then, earlier this week, he walked down the road with a neighbor to find a surprise: What had become an overgrown, neglected stretch of road that was difficult to navigate was now almost completely cleared of brush and debris.

"We were stunned at how different it had become. It looked like a totally different street," Frondorf said. "It's night and day. That's the first maintenance that we've seen on this trail since I've been here in '97."

The vegetation clearing was financed with a donation by the Devou Good Project, a Northern Kentucky-based nonprofit that also recently donated 1,000 bike racks to the city of Cincinnati.

Frondorf wasn't taken completely by surprise when he found the roadway cleared on Sunday afternoon. He's one of a group of organizers who have been considering the Maryland Avenue problem for the last several months.

Pedestrian safety advocate Derek Bauman is leading the effort to transform the stretch of Maryland Avenue into what organizers are now calling "Incline Run," as a nod to the area's proximity to the decommissioned Price Hill streetcar incline that closed down in the 1940s. While walking the trail, you'll find what is still left of the columns and buttresses that carried the incline cars during the early 20th century.

"This has been a sore spot for this neighborhood for a long time," said Bauman, who also owns multiple properties in East Price Hill. "It's a piece of transportation infrastructure that's existed for a long time that's been very underutilized."

Biking and walking access is especially challenging on the steep inclines that separate the West Side and the urban river basin.

"The other options are Warsaw Avenue, with a lot of curves and a steep hill, and we have crashes there and cars running into things," Bauman said. "So to direct people to go that way, or take Elberon where it's the same situation, it's just uncomfortable."

Frondorf said he's happy the trail will reopen, but had told city officials previously that if it was ever reopened to vehicle traffic, he would consider moving. For a short period of time in 2012, during construction on the nearby Waldvogel Viaduct, the Department of Transportation and Engineering reopened Maryland to vehicle traffic to compensate for construction-related closure of Maryland's bottom end at State Street.

"We did not care for that," he said. "Having that open to traffic again told us what it used to be like. People would fly down the street."

'A nexus for bike trails'

Incline Run won't be the first trail to open this year on the West Side: In August, organizers "cut the ribbon" on another short stretch of trail winding through Dan J. Gilday Recreation Complex in Riverside.

He pointed out a unique problem his neighborhood is facing.

"Lower Price Hill is positioned so that the west side of town would come through," Lang said. "That's important for developing Lower Price Hill as far as businesses and housing."

He also noted that, despite this positioning, development has remained stalled.

"There's really a lack of resources in Lower Price Hill right now in terms of restaurants or any kind of retail," Lang said. "This would be a chance to open that up."

Parking is a significant hurdle to getting people to stop in the neighborhood instead of just drive through, he said. "Particularly on-street parking, if we could reduce parking down by any amount, that would be great."

That's where Lang believes access to more bike infrastructure could help out. With the Ohio River Trail West underway, as well as plans to continue developing the nearby Mill Creek Greenway Trail, "Lower Price Hill is becoming a nexus for the bike trails coming through here," Lang said.

Lang and Bauman both said they are in talks with Red Bike about installing a new Red Bike station in Lower Price Hill. It would be the farthest west the bike-share system has stretched since its launch in 2014. Bauman thinks the introduction of electric-assist, or "e-bikes" to the bike share system presents a special opportunity to pair with the Incline Run trail.