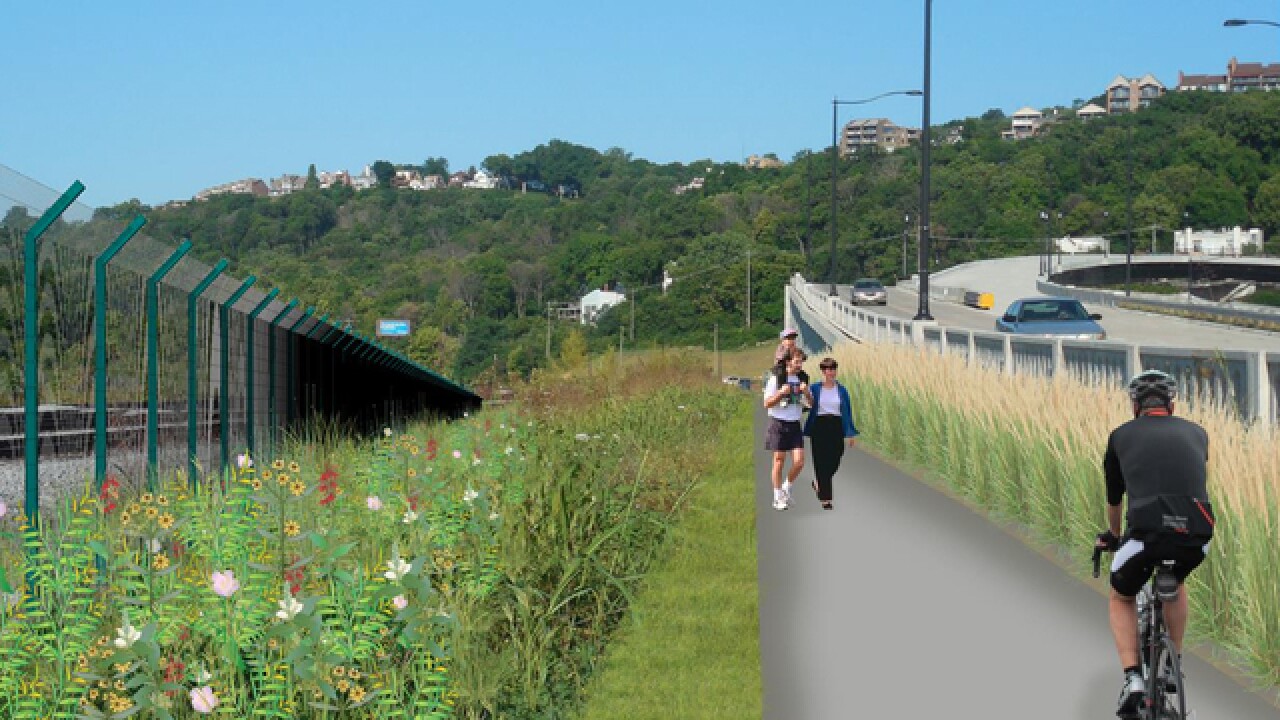 CINCINNATI — If you happen upon Jim and Jack's on the River, a charming bar and grill tucked on U.S. 50 in Cincinnati's Riverside neighborhood, chances are you were already looking for it.

"Our business is more of a destination place," said manager Karen Hartwig. "People are coming here for a specific reason. They’re not just popping into the neighborhood of Riverside and saying, 'Hey, let’s stop into Jim and Jack’s.'"

She and other Riverside stakeholders hope plans for a new bike trail running along the neighborhood's riverfront will help change that.

Earlier this summer, city crews completed a small portion of the Ohio River Trail West. It's just the beginning of what will become a 22-mile, $20 million mixed-use walking and biking trail that will stretch from downtown Cincinnati to Shawnee Lookout in Sayler Park. In June, planners and advocates cut the ribbon on a half-mile stretch of the trail in Dan J. Gilday Recreation Complex.

Although it's just a small segment of what will become a much larger trail, Hartwig — whose father opened Jim and Jack's 35 years ago — said it's a sign of big things to come.

"We’re hoping it brings more people into this area, into this neighborhood," she said.

Riverside, a long and narrow neighborhood that hugs the riverbanks along the city's West Side and sits boxed in by the steep incline up to the East and West Price Hill, is mostly industrial without many of attractions to draw people from other parts of town.

"We do get a lot of support from the people who work in the industries — for lunch, trade and happy hours and such — but we don’t have people who just migrate to the neighborhood for anything specific other than us," Hartwig said.

The Ohio River Trail West only spans the length of Gilday Park for now, but Riverside Community Council member Gregory Lang said that this segment is just the beginning.

"The plan is that we’re connecting to another piece of the project further east of here, which directly connects through from this park, Gilday, to Boldface Park (in neighboring Sedamsville)," Lang said. "We’ve also got another section planned for construction in Lower Price Hill."

And to the west, Riverside has plans for more trail that will eventually connect all the way to Sayler Park.

It's all part of a plan to connect the city's western riverfront communities with an alternative to U.S. 50 (also known as River Road along that stretch). It's a span of road that's a hot spot for speeding and a favorite route for large tractor-trailers, making it less than ideal for alternative modes of transportation such as bicycles.

Pair that with the single Metro bus route that runs through the neighborhood, and circumstances all but ensure visitors need a car to drop by.

Lang said it's a problem that exists throughout much of the city's West Side.

"The West Side is under-served by a lot of recreational facilities, in particular bike lanes itself, so it was key that we work on a section of the trail," he said. "So whether it be work, trying to get to work, whether it be just recreational to try to get people to the park or from one park to the other, to get from their house to this spot is another. It’s just a way to connect."

Riverside's natural landscape is often overshadowed by the railroad and other industrial parks that line River Road, Lang said, but it also makes for the perfect setting for a biking and walking trail.

"This is kind of a unique section of the river in that it is so steep. And because of the steepness, that’s the reason it is as green as it is," he said. "Even though there’s a lot of industry here, there’s still a lots of natural assets, parks all along this section of the river, up on top of the hill, down on the river, and the goal of this trail is to try to connect those pieces."

The neighborhood's generally flat terrain — the thing that helped attract railroads in the first place — make it ideal for biking.

"Ideally, we’d want to parallel the rail because of that. It’s not always easy to do that, but that’s something we’re working with," Lang said.

'Ohio River Trail West'... and beyond

Once complete, the Ohio River Trail West will constitute just one segment of the much longer Ohio River Trail, parts of which are already complete throughout the city's East Side riverfront neighborhoods.

And it doesn't end in Cincinnati.

"The plan is eventually to span the whole width of Hamilton County," said Wade Johnston. Johnston heads up Tri-State Trails, a subsidiary of the nonprofit Green Umbrella, which advocates for sustainable and environmentally-friendly investments throughout the Greater Cincinnati area.

In 2017, Tri-State Trails unveiled its vision for a 30-mile trail loop — "CROWN," or the Cincinnati Riding or Walking Network -- that would encircle Cincinnati's urban core and connect to more than 100 miles of smaller trails and on-street bike infrastructure.

The CROWN's wide footprint, spanning the width of Hamilton County once realized, is part of Green Umbrella's effort to make alternative and active modes of transportation accessible to all residents, not just those in neighborhoods, cities and townships that can afford to build them.

"There’s so much potential to build more facilities in Greater Cincinnati so that biking is not something that is exclusive to affluent communities," he said. "It’s something that in any community you live in, I think, you should have an opportunity to safely walk or bike around."

The trail network eventually would also connect to larger, state-spanning trails such as the Ohio-to-Erie Trail, which connects Lake Erie and the Ohio River completely through off-road bike paths. This means it would bring a surge of "bike tourists" to businesses like Jim and Jack's.

"People come from all over the country to ride on this amazing (Ohio-to-Erie) trail experience and dip their tire in Lake Erie and then end putting it into the Ohio River," Johnston said. "We believe that by creating these connections will encourage that type of economic activity to continue."

For Hartwig, it doesn't matter where they come from, just as long as they come through the door.

"Once they’re here, we’ll impress them," she said. "They’ll want to come back, but we’ve got to get them here first, and we’re hoping things like that and new developments are able to do that for us."