But not in time for the 6th-grader to use it 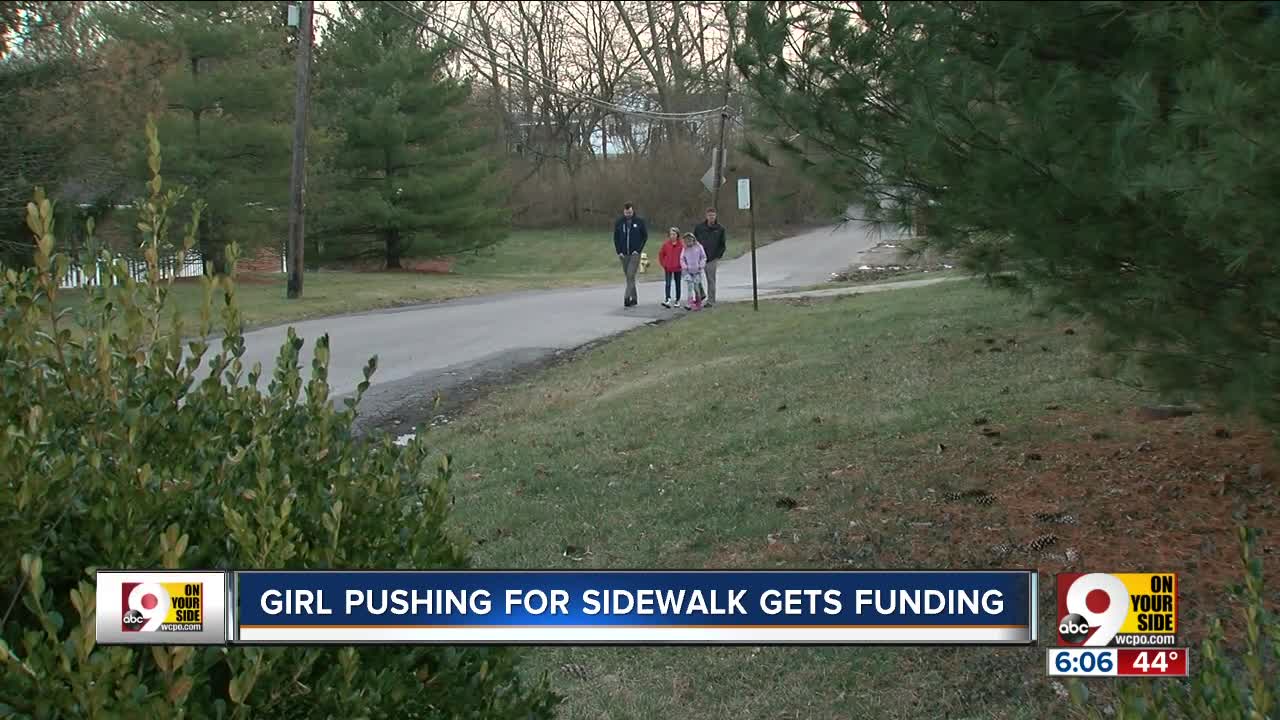 Nearly two years ago, then 9-year-old Madelyn Gerker gained City Council members' attention when she sent a handwritten letter to Mayor John Cranley requesting that the city install a sidewalk along Sussex Avenue, where she and her two younger siblings walk to school each morning. Fast forward to today, and council is set to approve an ordinance that officially would accept a $400,000 grant from the state to make that sidewalk a reality.

CINCINNATI — After years of lobbying city, neighborhood and school district leaders, a Mount Washington student's pursuit of a safer walk to school saw its final step realized Thursday afternoon, but not in time for the Sands Montessori sixth-grader to use the new sidewalk herself each morning.

Nearly two years ago, then 9-year-old Madelyn Gerker gained City Council members' attention when she sent a handwritten letter to Mayor John Cranley requesting that the city install a sidewalk along Sussex Avenue, where she and her two younger siblings walk to school each morning. Fast forward to today, and council is set to approve an ordinance that officially would accept a $400,000 grant from the state to make that sidewalk a reality.

In the time since her letter to City Hall, Madelyn has spoken at Mount Washington Community Council, City Council and Cincinnati Public Schools Board of Education meetings and was instrumental in pushing the school board to update the district's Safe Routes to School plan.

While Madelyn said she's pleased about the progress she's made, she's also learned a lot about the meaning of "red tape."

Part of the challenge to install a new sidewalk along Sussex was the street's lack of curb and drainage infrastructure, city engineer Bob Vickrey said in 2018. "It's not just putting sidewalks on there," Vickrey said. "You have to do the curb work, end up working with storm water, all different issues."

COLUMN: Children's eyes give fresh look at the meaning of 'safer streets'

That created a cost burden on the project for which the city's budget didn't have room. By the end of the 2018 summer break, city engineers still had not found a funding source for the new sidewalk. That prompted Madelyn to take her case to the school board. That's where she learned that in order to qualify for the state's Safe Routes to School grant program, the district would have to update their plan.

"It makes me feel frustrated that (the district) didn't keep updating it because, without that, people wouldn't be able to walk to school safely," she said.

Because of the extra legwork involved in making the project eligible for state funding, that means the funding won't be available until 2021, a year after Madelyn will have graduated from Sands Montessori. But she said her frustration hasn't made her feel discouraged.

And, she said, her work isn't finished. Along with Walnut Hills seventh-grader Jeremiah "JT" Thornton, Madelyn co-chairs a Youth Pedestrian Safety Task Force, where she and JT work to engage their fellow students on the topic of pedestrian safety.

JT made headlines himself last year, when he and his classmates won a national award for producing a PSA rap video on how kids can stay safe when walking to school.

JT told WCPO last year that he was inspired to produce the video after drivers struck 13 CPS students while they were walking to school that school year.

"That really, I was like, ‘Wow!” he said. “People that I've known, people that are my peers are getting hit by cars."

"It's still pretty dangerous," Madelyn told WCPO. "Like, without a sidewalk, it's dangerous. It's just dangerous in general. The cars, they just speed past us. It’s like they don’t even notice that we’re there," she said. "If there’s two cars passing by then we have to get into the grass. Otherwise, we’ll get hit by the car."

City Council voted to approve the ordinance accepting the $400,000 grant at its meeting at 2 p.m. Thursday.