'Who better to reach students than students?' 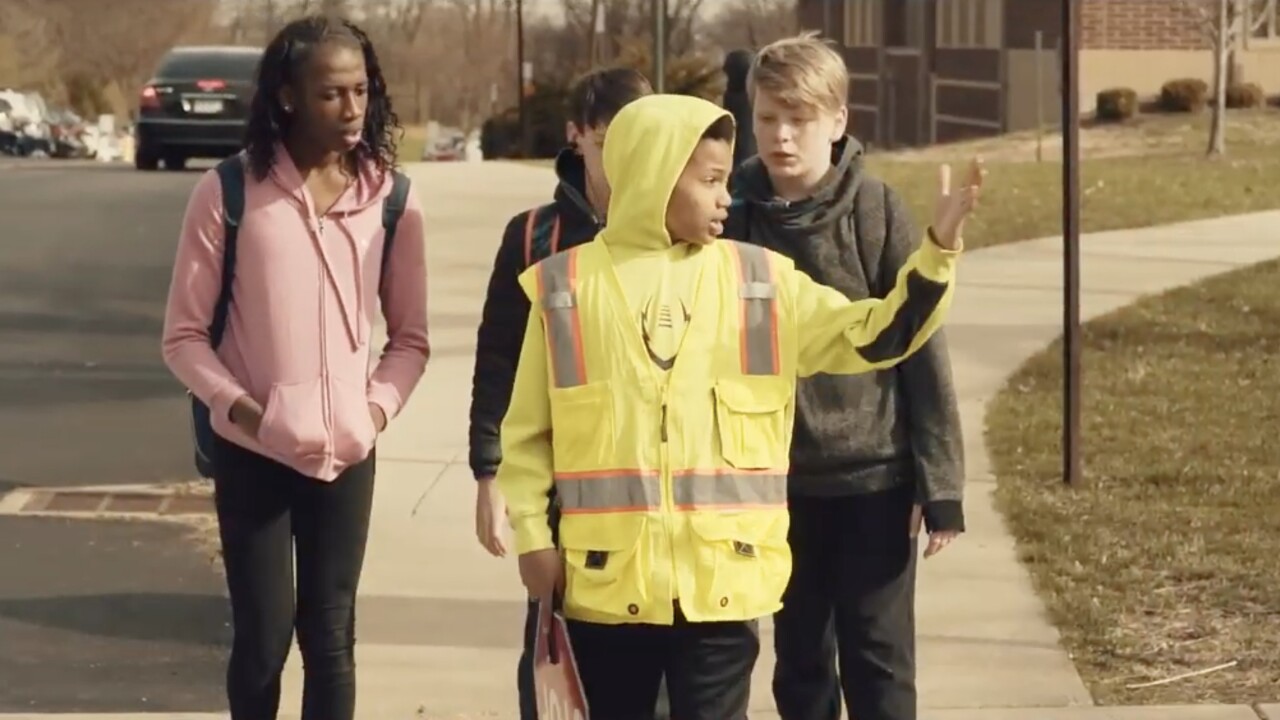 Jeremiah &quot;JT&quot; Thornton performs in a PSA he and fellow Covedale Elementary students produced in April 2019 to promote pedestrian safety.

CINCINNATI — For Cincinnati Public Schools students Jeremiah Thornton and Madelyn Gerker, class might be out for the summer, but that doesn't mean they're taking a break.

Not by a long shot.

The two have made names for themselves championing pedestrian safety. Gerker first made headlines last year when she successfully petitioned City Council to install a sidewalk on her Mount Washington street to make the walk to Sands Montessori safer for herself and her two younger siblings. She'll start sixth grade at Sands this August.

Similarly, Thornton -- who goes by "JT" -- leads a group of Covedale Elementary students in raising awareness after five of his classmates were involved in crashes walking to and from the Green Township campus just last year. He'll start seventh grade at Walnut Hills later this year.

They have both become regular faces seen at City Council, school board and neighborhood meetings on the issue.

Now, one city councilman wants to put them in charge of a group of young people who will engage directly with CPS students across the district -- as well as some outreach to drivers -- on the topic of walking to and from school safely. In a motion filed earlier this week, Councilman Greg Landsman called for the creation of a "Youth Pedestrian Safety Task Force."

Back in April, JT and his classmates wrote and recorded a public service announcement in which they rap about basic rules students should follow while they're walking to school. Here is the 12-year-old performing the rap at the city's May 21 pedestrian safety summit in Evanston:

Covedale students performing a rap from a PSA on pedestrian safety they wrote, shot and submitted to a national contest... which they won. Last year, 5 Covedale students were struck on their way to school. @WCPO #ItsLitToNotGetHit pic.twitter.com/AmTJxWoY6k

The lyrics read, in part:

"Rule number one: Look before you cross the street,
Look left, right, left again before you move your feet.
Rule number two: Hold up, I'm talking to you,
Put everything down, don't wanna end up on the news."

The rap ends with what has become a catch phrase for the students: "Remember kids, it's lit to not get hit. Don't follow these rules, and your life might end."

They submitted the PSA to a contest hosted by Washington, D.C.-based Safe Kids Worldwide, a nonprofit with the goal of reducing injuries incurred by children across the country, and their video won.

Meanwhile, across town in Mount Washington, 11-year-old Gerker has been keeping herself busy. After petitioning City Hall for her new sidewalk, she also began engaging the Cincinnati Public Schools Board of Directors to update Sands Montessori's Safe Routes to School plan, which had not been refreshed for years.

Here's Nine on Your Side's report on Gerker's speech to the school board last year:

Fortunately, none of JT's classmates suffered fatal injuries from the collisions, but 2018 marked a particularly dangerous year for CPS students. Between May and December of last year, thirteen district students were involved in crashes as they walked to or from school, with a heavy concentration in West Side communities like JT's.

Among them was Gabriella Rodriguez, a student at Western Hills University High School, less than a mile from Covedale. She was trying to catch her Cincinnati Metro bus to school on Harrison Avenue on the morning of Sept. 10 when two vehicles struck her. She died from her injuries later that day.

Rodriguez's death and the dozen other students who were injured on their walk to or from school added another tragic layer to what, over the last three years, has become a growing conversation about the safety of Cincinnati's streets for people who are walking. Since 2016, multiple members of City Council have begun introducing motions and legislation to boost pedestrian safety improvements including, most recently, Landsman who in January put forward a five-part motion outlining a long-term strategy.

He said Cincinnati's young people represent an "especially vulnerable" class of people using the city's streets every day. Referring to the thirteen CPS students struck last year, he said, "We have to engage more directly with our students on this, and who better to reach students than students?"

The string of crashes involving students is what prompted Landsman this week to propose the Youth Pedestrian Safety Task Force, with both JT and Gerker poised to take point.

"Here we have two kids, one from the West Side, one from the East Side, working to make real change and make their fellow students safer," Landsman said.

In the days leading up to his motion, Landsman interviewed the two on Sunday for a program on WDBZ FM:

JT and Madelyn are leading change to keep students safe. And they’re just getting started.

Full videos of JT rapping on my IG and FB story. You have to see this...#PedestrianSafety #KidsLead pic.twitter.com/IPmpClQZXW