Who was to blame for Hamilton County's $821k legal bill last year? 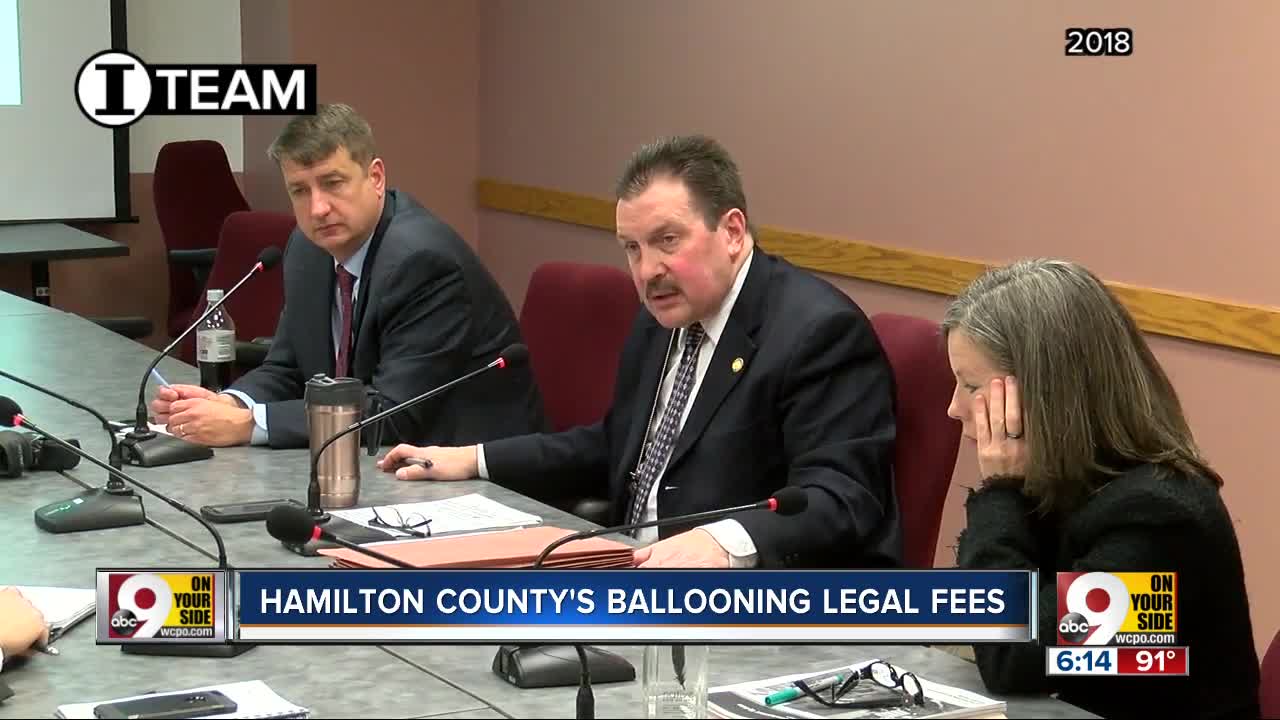 As the political fight over a concert venue at The Banks drags into its fourth year, Hamilton County is paying hundreds of thousands of dollars more than it budgeted for to its private attorney to help solve the dispute.

CINCINNATI — As the political fight over a concert venue at The Banks drags into its fourth year, Hamilton County is paying hundreds of thousands of dollars more than it budgeted for to its private attorney to help solve the dispute.

Hamilton County Commissioners voted in 2016 to cap the fees it pays to attorney Tom Gabelman’s firm of Frost Brown Todd at $575,000.

But, then they voted in two of the past three years to exceed that cap, and pay even more money in legal bills.

“It hurts the taxpayer at the end of the day because they’re the ones who are paying all of the bills,” said former Hamilton County Commissioner Chris Monzel. “We should have had this music venue done and finished two years ago.”

While Monzel believes Gabelman is the best attorney to represent the county on riverfront development, he also says commissioners need to reign in his legal team’s bills.

“The county is really not going in there and putting limits on the spending and it does look like a blank check and it shouldn’t be,” Monzel said.

Gabelman has been the attorney behind riverfront development in Cincinnati for more than 20 years.

He helped develop Great American Ball Park, negotiate leases with the Cincinnati Bengals and General Electric, and bring life to The Banks.

“This was a mud pit. There was a gulf between the ballpark and the Freedom Center. There was nothing,” Gabelman said. “Right now it’s one of the largest urban redevelopment projects in the country.”

Gabelman originally worked at the law firm of Vorys Sater Seymour and Pease. Since he moved to Frost Brown Todd in 2013, the firm has collected nearly $4 million from the county, according to public records data.

The county has spent $21 million on legal fees to Gabelman’s two firms since 2000, the data shows.

“It’s big number, I think it averages over 20 years about a million dollars a year,” admitted Hamilton County Commissioner Todd Portune. “But when you look at the body of work that’s been done and you look at the value of the work we have received over the years … we have more than received a return on that investment that justifies it.”

The Banks now generates $1.7 billion in economic activity each year, according to county officials.

While Portune is happy with Gabelman’s work, he is frustrated that negotiations with the city over the concert venue have dramatically increased his firm’s legal bills to the county.

“Let me begin with the problems and the objections that have been raised by the city of Cincinnati, principally the mayor, about the music venue at The Banks,” Portune said. “Quite honestly I think that the increase in legal fees is directly due to those inappropriate … objections.”

Music at The Banks

Talk of bringing a music venue to The Banks surfaced publicly in 2015 and quickly became a hot issue.

First city and county leaders fought over who should build the concert venue on the riverfront land they jointly control.

Cranley wanted Columbus-based PromoWest to win the bid for an indoor and outdoor venue.

Then city and county leaders argued about where to build the concert venue at The Banks, who should pay for a public parking garage, and how much say the Bengals should have in the deal.

Now city and county leaders are arguing over where to relocate Hilltop Basic Resources, a riverfront concrete and gravel facility adjacent to Paul Brown Stadium. The company is at the center of a land swap with the Bengals that would allow the music venue to be built.

“If the mayor had not been raising objections … that were unreasonable and uncalled for by any standard of looking at this, that music venue would be open today,” Portune said. “I think that’s what you should be looking into, and not whether we’re paying Tom Gabelman too much money. Honestly.”

What is Cranley’s response to being blamed for the county’s high legal bills?

“It is patently absurd to blame me for their decisions," Cranley said. "We hire lawyers at public servant rates, not $20 million. And they do a good job of being transparent and trying to protect the taxpayer interest. In contrast, they have paid $20 million to Tom Gabelman over 20 years and its not surprising when you pay high corporate rates that you’re going to have the corporate interest protected ahead of the public good.”

The city uses it’s in-house solicitors to negotiate on issues with Hilltop and the concert venue.

It isn’t unusual for municipal governments to hire private attorneys when specialized skills are required. For example, both the city and county hired outside attorneys to help with the ongoing Metropolitan Sewer District litigation.

Although Gabelman is a private attorney, he insists that he represents taxpayers.

“I’m going to protect the interests of the taxpayers,” Gabelman said. “I’m a taxpayer, my family is a taxpayer.”

Under a 2016 contract, the county pays Gabelman’s firm $250 an hour for legal work performed by his team. This is far less than the $560 he charges other clients per hour, Portune said.

“The people that we’re negotiating with, lets start with the Bengals, they’re not scrimping on having the best legal minds that money can buy,” Portune said.

“I’m negotiating against a lawyer that’s probably getting paid two and a half times what I’m getting paid,” Gabelman said. “Does that mean I give any less effort? Absolutely not.”

If county leaders routinely exceed the $575,000 they budget for legal expenses, why not raise the cap?

Commission President Denise Driehaus did not like that idea.

“I don’t know that raising the cap makes sense,” Driehaus said. “I think what makes sense is resolving the Hilltop issue.”

When county leaders agreed to cap legal fees in 2016, they didn’t anticipate that lengthy delays with the concert venue and Hilltop that would drive up their bills, she said.

“That’s why I wouldn’t want to remove the cap is because I do think we have a certain expectation in a normal year of what we would spend,” Driehaus said. “This has not been a normal year.”

The county’s 2016 contract with Gabelman’s firm remains in effect indefinitely unless either party terminates it. This means the county doesn’t seek bids from other law firms for the work.

“With the expertise that Tom has provided for us since the birth of this whole development, you’re not going to get that … in other firms,” Monzel said. “I think that’s why we were always willing to go back to whatever firm he was with.”

Considering the rising legal bills in recent years, Monzel now believes the work should be open to other bids so other firms can compete and the county may ultimately pay less.

“It should be an open transparent bidding process … if they don’t want to work within a budget and cap out the amount of legal expenses, the commission could go out and open it up for bidding,” Monzel said.

That’s not something that Driehaus or Portune want to do because they believe the legal bills will go down once Hilltop is resolved.

“We have been working on the relocation of Hilltop for three years. It can be tremendously frustrating,” Gabelman said. “To be quite honest with you, it’s a year longer … than it should have been because politics got in the way.”

As part of the county’s new lease with the Bengals in November, the team agreed to give up tailgating space for the concert venue in exchange for the county buying 15-acres of Hilltop land for 2,000 parking spaces and possibly a new indoor practice facility.

Lower Price Hill residents were initially opposed to Hilltop’s relocation, but a compromise involving city riverfront land seemed to have the votes to pass City Council — at least until Cranley raised red flags over the Bengals deal.

Some residents questioned the impact of trucks, dust and noise in their neighborhood at a meeting at City Hall this week. Cranley also continued his public interrogation of the project, suggesting the county and Gabelman were being secretive about the deal at taxpayers' expense.

“I make no apologies for demanding that they come clean with what they’re hiding from the public and how many tax dollars are being paid out to Hilltop,” Cranley said.

Meanwhile, as of last week, the county had not yet received bills from Gabelman’s firm for work done in July, August or September. The last bills the county paid were for $81,207 in May and $56,634 for June.

That money doesn’t come out of the county’s general fund, so commissioners insist it isn’t taxpayer money. But it is public money. It comes out of revenue collected from the stadium and parking at The Banks.

If Hilltop’s relocation dilemma isn’t resolved soon, groundbreaking for the concert venue will be delayed again. The project is already nine months late. It can’t open in late 2020 as planned unless construction begins in October.

In the meantime, PromoWest, which was bought by last year by AEG Presents – one of the world’s largest concert promoters – began construction on a competing concert venue across the river in Newport in August with an expected opening of late 2020.

Deep foundations for the garage and concert venue will be finished by the first week of October, with garage construction beginning immediately afterward, said Tom Banta, managing director of Corporex which is building the development.

“Now we see Northern Kentucky moving forward ahead of us and possibly getting something built and working before we’re even going,” Monzel said. “To me that’s troubling and disconcerting but adding to that, these legal bills don’t help the taxpayers of Hamilton County.”