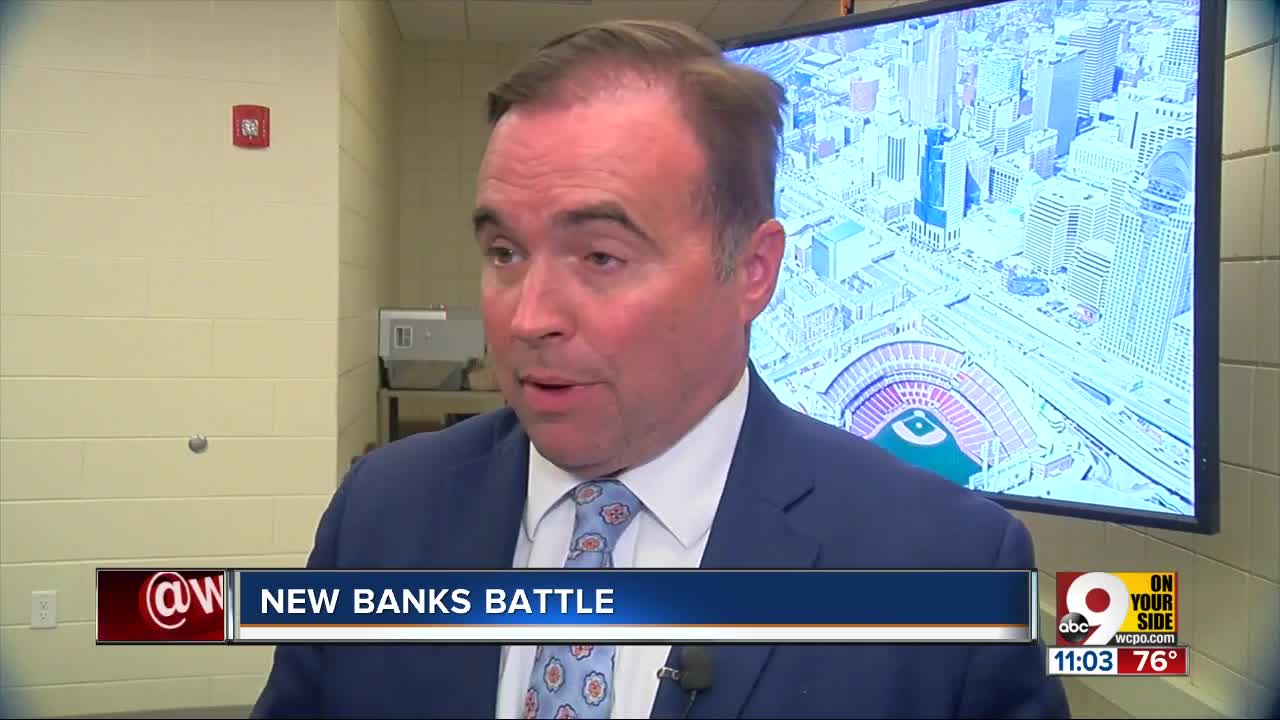 CINCINNATI — Mayor John Cranley continued his public interrogation of Hamilton County officials' plan for The Banks at a Tuesday night meeting in Price Hill, arguing the county had failed to tell taxpayers exactly what its new agreement with the Bengals would have them paying for.

Crucially, he said, he's concerned the deal — one allegedly necessary for the complicated land-swap that would make room for a new music venue — could endanger future development at The Banks by giving the team an inordinate level of control over the area.

"I personally believe that the public's entitled to know that information before we consider the legislation" that would allow the long-delayed construction of a new riverside music venue to proceed, he said. If a majority of City Council indicates it's ready to move forward, Cranley promised not to stop them. In the meantime, he said he would continue to agitate for the release of more information.

"I don't think we should move forward with it if the public isn't told the truth," he said. "Seems simple to me."

His words at the meeting, where he crossed verbal swords with Councilman David Mann, echoed objections he voiced in a memo weeks earlier. A separate memo sent from city solicitors to City Council earlier Tuesday reinforced the administration's stance that neither the county nor council nor the Bengals had been forthcoming enough with taxpayers.

In an interview the previous week, Hamilton County Commissioner Todd Portune articulated his own stance: That Cranley was being needlessly obstructive and preventing the city from acquiring an asset that could help anchor the entire (occasionally troubled-for-tenants) Banks development.

“The fact is, if the mayor had not been raising objections … that were unreasonable and uncalled for by any standard of looking at this, that music venue would be open today,” he said.

Cranley’s response: “I make no apologies for demanding that they come clean with what they’re hiding from the public and how many tax dollars are being paid out to Hilltop.”

This is the latest twist in a political drama that's lasted for more than three years as city and county leaders continually argue over the future of The Banks, which they jointly control. They've fought about who should build the concert venue, where it should be constructed and how much control the Bengals should exert over riverfront development.

Builders were supposed to break ground on the venue at The Banks eight months ago. It's is now set to open in the fall 2020, but only if groundbreaking occurs by October.

Lower Price Hill residents were initially opposed to Hilltop’s relocation, but a compromise involving city riverfront land seemed to have the votes to pass City Council — at least until Cranley raised red flags over the Bengals deal.

Tuesday night’s meeting was a supposed to be a chance for residents to ask questions, for Hilltop executives to display plans for their new facility, and for city and county leaders to talk about how to move forward.

But the new city memo raising questions about the county’s transparency with taxpayers and the city may have stalled negotiations.

County commissioners signed a new lease with the Bengals in November. The team agreed to give up parking space adjacent to the stadium for the concert venue.

“It looks to me as if the Bengals are getting more money, not less out of this deal, and they’re getting more development rights, not less, over the future of The Banks,” Cranley said. “I think its time to come clean and put the taxpayer interest first.”

Two weeks ago Cranley sent a memo to city council and county commissioners demanding to see a full, unredacted copy of the county’s purchase contract with Hilltop, including all public expenses that will be spent in the deal. He did not receive an answer.

“So now you have their lawyer telling the public that he’s not even going to tell us what the payout to Hilltop is,” Cranley said. “If they’re getting such a good value for the tax dollar, what are they hiding, why are they being so secretive.”

Now Cranley is raising questions about the county’s new lease agreement with the Bengals – including the commitment to provide 3,200 surface parking spots beginning with the 2021 season which could mean the last three lots at The Banks may be destined to become parking lots.

“It does appear relatively clear that – based on the publicly accessible information – that doing so would require the county to hold lots 1, 13 and 25 back from development during the remainder of the Bengals lease term,” Solicitor Paula Boggs Muething and Deputy Solicitor Luke Blocher wrote in the memo.

Cranley also questioned whether the county had given away control over the city’s parking lot at The Banks and allowed the Bengals new rights to an “urban planning review” of all undeveloped parts of The Banks.

“One effect of this change is to give a private party – the Bengals – a new decision-making veto over the future design requirements governing the public Banks project,” the city solicitors wrote.

If City Council votes down a pending deal which would allow Hilltop to relocate on portions of city-owned land, in exchange for giving the city land for a Lower Price Hill park, then it could stall the concert venue indefinitely and negate the new Bengals lease terms.

At the end of Tuesday night's meeting, Cranley said he wouldn't refer the land swap for a City Council vote without a transport study of how Hilltop's trucks loaded with concrete and gravel would effect the neighborhood, and an environmental study of the Hilltop-owned land on the east bank of Mill Creek that it intends to trade to the city. Unless the majority of council members say they don't want those studies, he added.