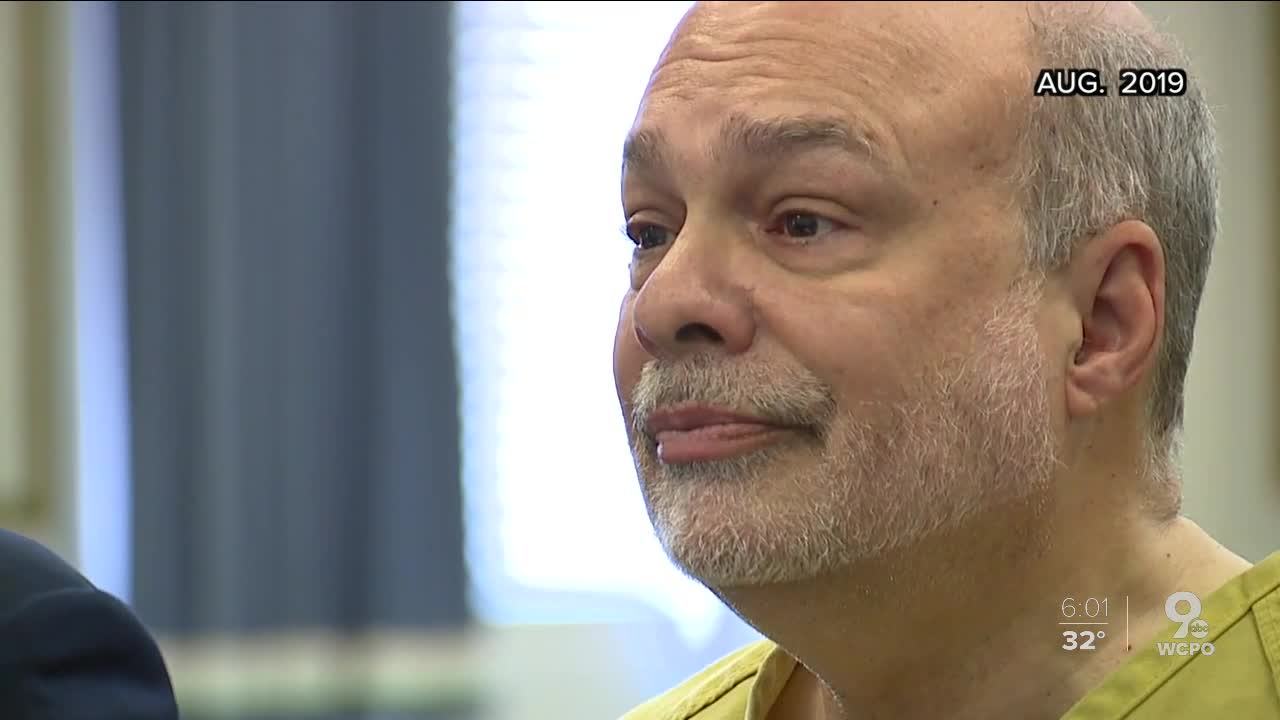 GREEN TOWNSHIP, Ohio — As the Archdiocese of Cincinnati scrambled last summer to address concerns about the conduct of Rev. Geoff Drew, the Green Township Police Department quietly executed a series of search warrants.

Officers carried out the search warrants on Aug. 2, 2019, three days after a former altar boy walked into the Green Township Police Department and accused Drew of sexually assaulting him 30 years ago.

The records provide new insight into the criminal investigation of Drew and the type of evidence prosecutors may use against him.

Drew, 58, is charged with nine counts of rape for allegedly assaulting his victim repeatedly from 1988 to 1991. The Catholic priest is being held in the Hamilton County Justice Center on a $5 million bond.

According to the Green Township Police incident report, the alleged victim said he was in the fourth grade when Drew began raping him at St. Jude Elementary School, where Drew was the musical director.

Within days after police took possession of the computer-related evidence, officers brought it to the Regional Electronics and Computer Investigations Unit for analysis, according to the Green Township police evidence chain of custody report.

RECI is a multi-jurisdictional task force based in Hamilton County designed to identify electronic evidence in criminal cases.

In their six-page response to a demand for discovery from Drew's attorneys, Hamilton County prosecutors disclosed a list of evidence that includes a 1983 letter Drew wrote to Sister Joanne Mary of Our Lady of Lourdes and a letter she wrote to Drew a few weeks later.

In addition, prosecutors obtained Drew's spiritual and psychological questionnaires that may have been part of the treatment the archdiocese said he would receive while on administrative leave.

Archbishop Dennis Schnurr announced on July 23, 2019 that Drew was being removed from St. Ignatius of Loyola, where he had been pastor for one year.

Parishioners of St. Maximilian Kolbe, where Drew was pastor from 2009 until 2018, expressed concerns to the central office of the archdiocese in 2013 and again in 2015, according to a news release from the Archdiocese of Cincinnati.

Schnurr said Bishop Joseph Binzer, the director of Priest Personnel at the time, addressed the issue with Drew, who said he would change his behavior.

The Archdiocese’s central office did not receive another complaint about Drew until August 2018, a month after he had been assigned as pastor of St. Ignatius. His departure from Maximilian was not related to parishioners' prior complaints, according to the archdiocese; he had requested the switch himself so he could live closer to his mother.

In an exclusive interview with WCPO in August 2019, Butler County Prosecutor Mike Gmoser said he told the Archdiocese in September 2018 that Father Geoff Drew, the Pastor of St. Ignatius Loyola Parish, should be monitored based on allegations that Drew touched and communicated with teenage boys in a sexually suggestive manner.

The Archdiocese had sent Gmoser a letter a month earlier that documented a woman's concerns about Drew's conduct while he was pastor at St. Maximilian Kolbe Parish in Liberty Township. Drew served there from July 2009 to June 2018.

It was the third time the Archdiocese had referred allegations about Drew to Gmoser's office since 2013, according to the prosecutor and the Archdiocese.

Drew's concerning behavior included “uninvited bear hugs, shoulder massages, patting of the leg above the knee, and inappropriate sexual comments about one’s body or appearance, directed at teenage boys,” according to a news release from the Archdiocese.

Gmoser determined none of Drew's actions were criminal, but they should still be addressed in a meaningful way.

That's why Gmoser said he suggested monitoring Drew at St. Ignatius, which had the largest school in the Archdiocese.

"I want the Archdiocese to act smart and not stupid," Gmoser said.

The Archdiocese confirmed during a news conference last August that after receiving Gmoser's recommendation, it had not actively monitored Drew. Instead, the Archdiocese allowed Drew to self-report to a "monitor" not connected with the parish.

The Archdiocese admitted it didn't inform the school or lay leaders in the St. Ignatius parish that it had concerns about Drew's conduct.

"We should have put much stronger verification in place, including telling certain St. Ignatius Parish and school leaders," Archdiocese Spokesman Mike Schafer said.

It was in June 2019 that the central office received a complaint from a St. Ignatius family that Drew had texted their teenage son. That complaint was turned over to the Hamilton County Prosecutor’s Office.

“It’s obvious that in this matter we have handled things very, very poorly, made serious mistakes," Schnurr said in a statement. "And for that I am deeply, deeply apologetic. I’m deeply sorry. I’m sorry for the pain that this has caused so many people.”

Officials with the Archdiocese of Cincinnati said they made “serious mistakes” in responding to parishioners’ concerns about Drew's behavior dating back at least six years.

Schafer said Binzer knew about the allegations against Drew since 2013, but he didn't share that information with Schnurr.

The Archdiocese removed Binzer as the head of personnel, Schafer said.

Until the rape charges filed last year, Drew had never been accused of criminal conduct against children.