'I can't breathe': Hundreds protest at Washington Park, Courthouse and the Banks for second day 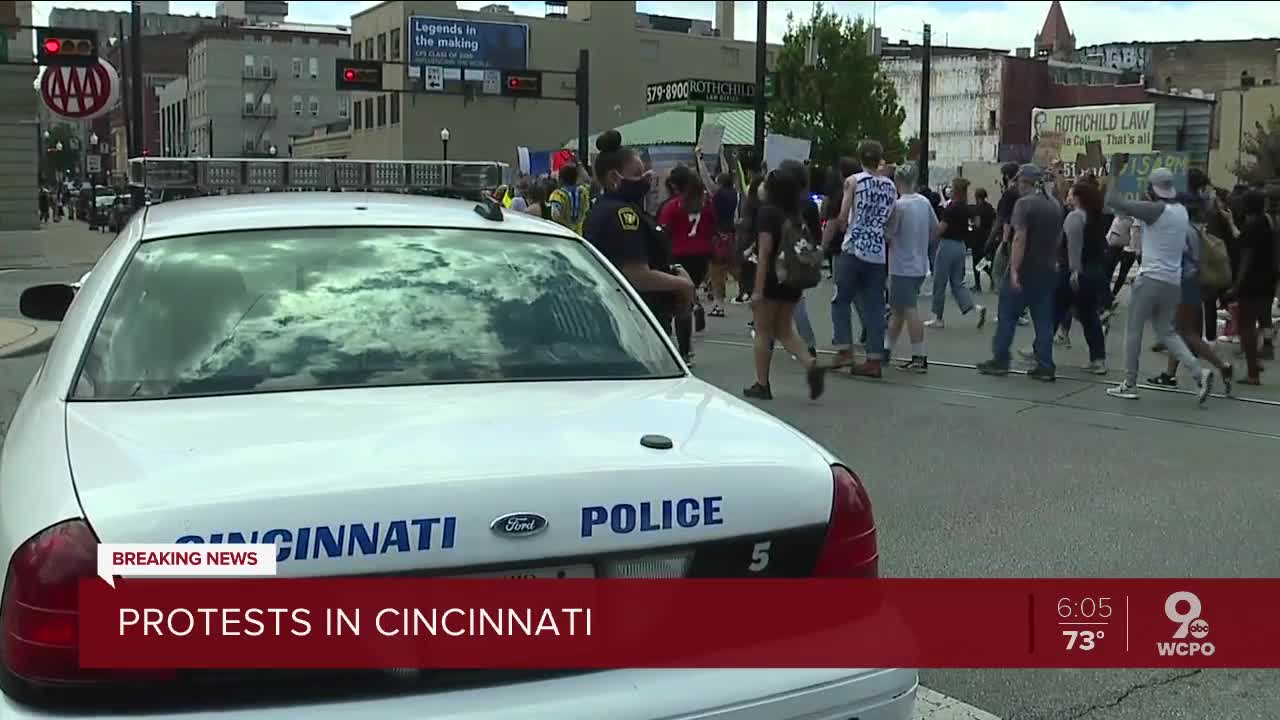 More than 200 people convened on Washington Park Saturday afternoon for a second day of protests against recent police killings of black people in America. 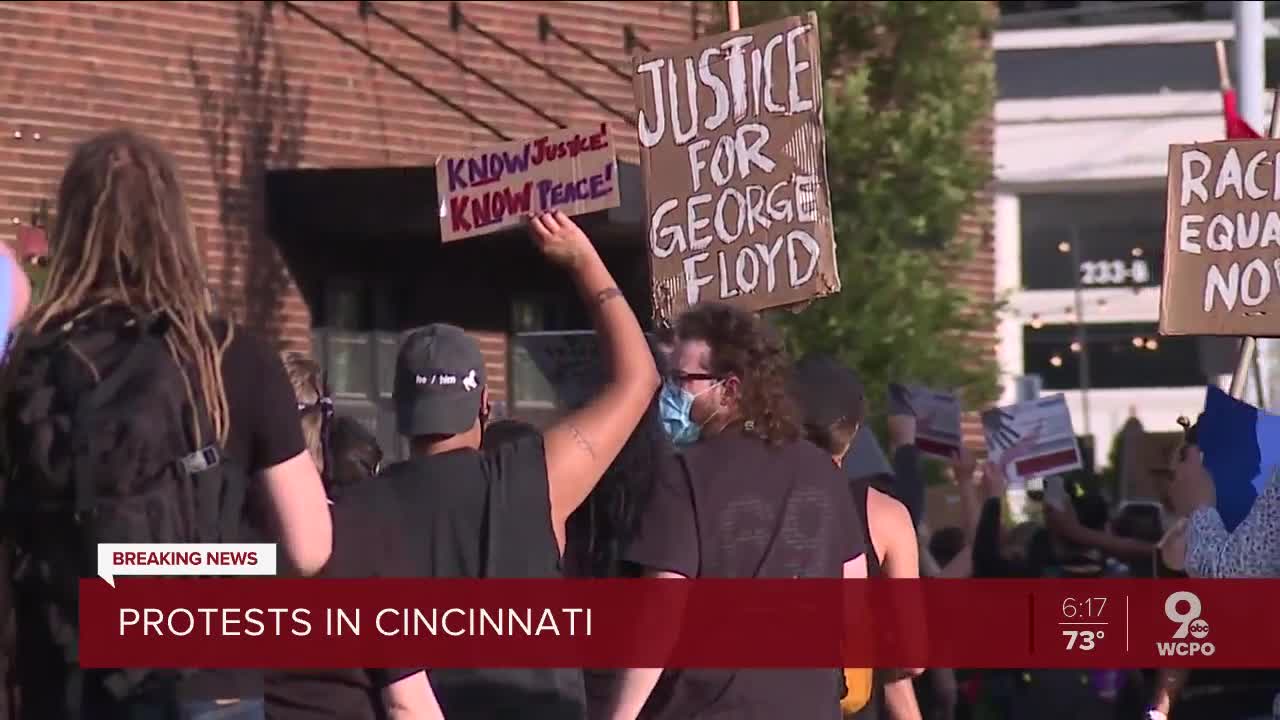 CINCINNATI — Hundreds of people convened on Over-the-Rhine and moved across Downtown Cincinnati Saturday afternoon for a second day of protests against recent police killings of black people in America.

Protesters gathered just before noon at Washington Park in Over-the-Rhine, many wearing face masks and standing six feet apart. With fists raised, protesters recognized a moment of silence between passionate speakers in solidarity with those who have died.

Protesters taking a knee together for 7 min in Washington Park @WCPO pic.twitter.com/o2IkZtCb5a

Participants held signs and chanted for justice for George Floyd, a black man killed in Minneapolis after police officers knelt on him and pinned him to the ground. One of the officers involved, Derek Chauvin, was fired from the department and subsequently arrested and charged with third-degree murder and manslaughter in Floyd's death.

Others showed support for Breonna Taylor, a Louisville EMT shot in her home by police who served a warrant in the wrong apartment, and Ahmaud Arbery, a black man shot while jogging in Georgia. Others recalled Samuel Dubose, the man shot and killed by UC Police Officer Ray Tensing in 2015.

Joe Mallory, the first vice president of the NAACP Cincinnati, called for allies to join protesters of color at the marches Saturday.

At 1:30 p.m., protesters began marching to Cincinnati City Hall on Plum Street before marching back down 9th Street to the park. More protesters moved to the Hamilton County Courthouse and Central Parkway, where much of Friday night's protests occurred.

Marchers coming down 13th St pouring back into Washington Park. CPD blocking off this part of Race for protesters @WCPO pic.twitter.com/71nYsleq3j

Elsewhere, chants of "I can't breathe," which were Floyd's dying words and also references the death of Eric Garner in 2014, could be heard as protesters marched down streets in Over-The-Rhine.

Chants of "no justice, no peace" could be heard echoing down East Ninth Street after protesters passed Cincinnati City Hall.

By 3 p.m., dozens had marched down Main Street from the Hamilton County Courthouse and Justice Center to the Banks outside of Paul Brown Stadium.

Protesters at The Banks near Paul Brown Stadium

This is the crowd at the Banks right now. @WCPO pic.twitter.com/ZSdzNTBfvU

"It's just... really amazing to see the city come out like this," said one protester, a woman named Brea, tearfully. "I just... was on my way to work and didn't expect this, and I'm sorry I really don't have good words right now. It's amazing to see this support."

Jaime Castle, another protester, said she joined the marches to get a different perspective.

"I come from privilege, and I don't understand the experience like a person of color will," she said. "So I am here, learning to be a good ally."

A crowd huddled outside a coffee shop window that had been shattered by a brick Friday night. On Saturday, protesters lined up to buy food and drinks, showing the kind of unity organizers hoped to spread.

“Rioting and looting are not our objective," said organizer Keizayla Fambro. "Rather, to understand and process our emotions and heal and ground together."

By 4:30 p.m., protesters had reached Cincinnati Police District One Headquarters on Ezzard Charles Drive. The previous night, protesters peacefully gathered for hours before moving to the Courthouse.

George Floyd protest is now moving away from Cincinnati Police District 1. This gives you an idea of the size of the crowd. @WCPO pic.twitter.com/JyoAiLafFM

As some tensions rose on 12th Street, protesters stepped in to de-escalate the situation.

Tense moment between George Floyd protestors and Cincinnati Police Officers on 12th St near Washington Park. From what I could see demonstrators stepped in to calm the situation down before it could escalate. @WCPO pic.twitter.com/DMtwWbmw3u

Flashbangs and pepperballs were used near 12th and Race St. at 5 p.m., according to reporters on scene. Police also reported they had dispersed a "disorderly crowd" and that people should avoid the area.

Police Lt. Steve Saunders said two people had been arrested in the area after allegedly trying to steal an officer's bike and spitting on police.

This is happening right now between @CincyPD officers and protestors. I saw multiple flash bangs, pepper spray being used by officers. Also saw protestors spitting at and being physical with officers. @WCPO pic.twitter.com/ZiTqc1uM3I

"This group started a peaceful protest in Washington Park earlier today and has marched along downtown Cincinnati & OTR Streets for the past few hours. These are the only two arrests due to protesters today," Saunders said.

Police said 28-year-old Imani Brazile has been charged with Failure to Disperse, a misdemeanor charge, and Harassment by Inmate by Bodily Fluid, a fifth-degree felony. Police also said 19-year-old Brandonlyn Wilson would be charged with Failure to Disperse and will be charged in connection to the theft of a Cincinnati Police officer's mountain bike.