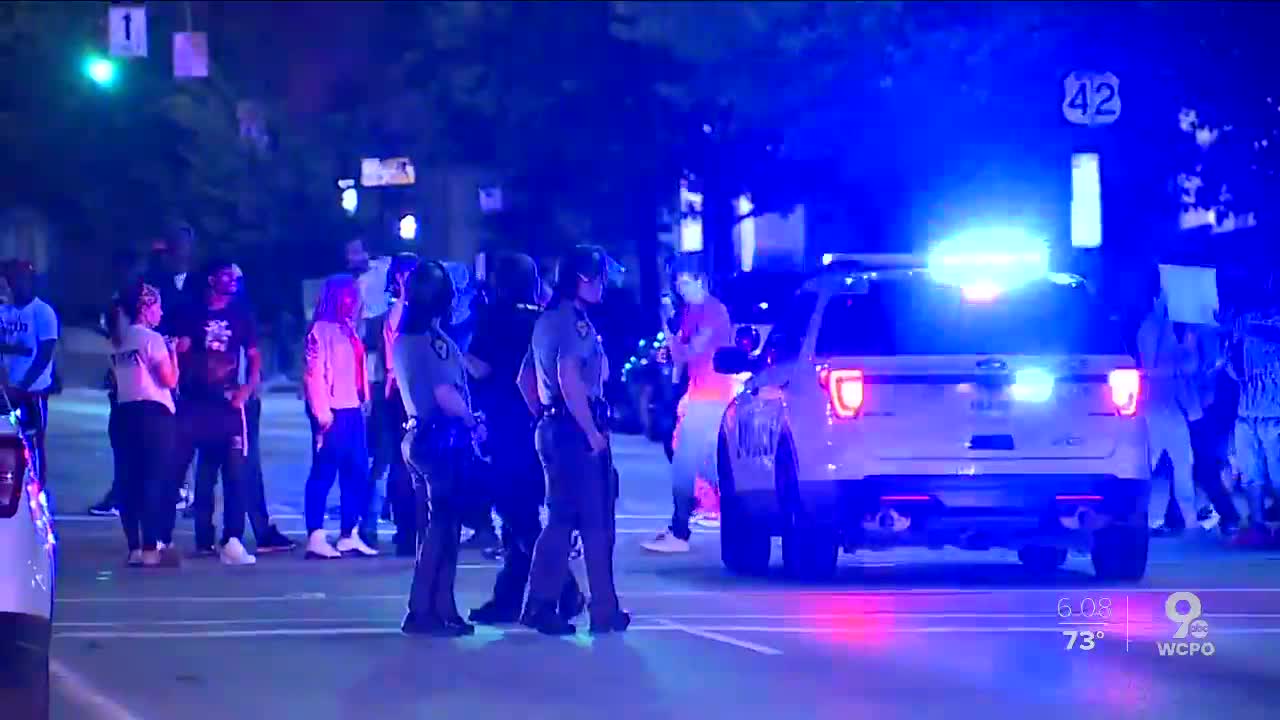 CINCINNATI — After a night of protests that escalated to violence, Mayor Cranley and Cincinnati Police Chief Elliot Isaac have announced a mandatory curfew starting at 10 p.m. Saturday night for the Downtown, Other-The-Rhine, West End and the Banks neighborhoods.

The curfew will end at 6 a.m. Sunday morning. Cranley said the curfew does not apply to essential workers.

They addressed the city in a press conference Saturday morning after Friday night's protest in response to the death of George Floyd.

Cranley said the crowd began with about 250 people gathering at the Hamilton County Courthouse. The group marched to Over-The-Rhine, into the West End and entered I-75, blocking traffic. Protesters then marched back to Cincinnati Police District One Headquarters, where Chief Isaac talked to members of the crowd.

The crowd remained peaceful until shortly after 11:00 p.m., when people started throwing rocks and bottles at officers and police cruisers.

“There were a small group of people who broke windows, stole from legitimate businesses," Cranley said.

Some protesters began smashing out windows of businesses in Over-The-Rhine and looting stores. Cranley said about 50 businesses, including Black Coffee and Cappel's, had windows broken.

Public service crews were out cleaning up glass this morning.

“A conflation between people who are exercising their First Amendment right to protest and free speech and people who take advantage and exploit that opportunity to engage in criminal behavior -- they are not the same thing," Cranley said.

Emergency Order issuing a curfew in designated neighborhoods in Cincinnati for this weekend. The curfew is in effect from 10 p.m. to 6 a.m. pic.twitter.com/641Bp21mnL

Chief Isaac said the number of protesters made it difficult to control the situation.

"We were extremely out-numbered. Something that you have to control is access. And we will be developing and improving our strategies as this develops," Isaac said.

Officers will work 12-hour shifts, and "off days" are canceled for the department for the rest of the weekend. Isaac encouraged people heading out into protests to treat other participants, officers and first responders with respect.

“Our officers are extremely professional, they’re very disciplined, they’re very patient, but they will defend themselves," he said.

Following continued protests Saturday, the city of Cheviot announced a similar curfew, to be enforced from 10:00 p.m. Saturday night until 6:00 a.m. Sunday morning.

The mayor of Cheviot, Samuel Keller, has announced a state of emergency for the city, as a result of the protests in Cincinnati.

"In consultation with the City of Cheviot's chief of police and the safety-service director, the mayor has determined that a similar threat exists within the Cheviot city limits," reads the notice from the city.

The curfew is imposed on the business district, specifically. All businesses must close at 10:00 p.m. Saturday night, per the order, and individuals are prohibited from being in the business district. The order does not apply to essential workers such as emergency personnel, local government offices and employees "engaged in their lawful duties."

Protests went on as scheduled Saturday in Washington Park, The Banks, District One and other areas Downtown.

Cincinnati Police said that, as of 5:15 p.m., they arrested two people near Washington Park during the protests. Officials said one of the people arrested allegedly spit on CPD officers and, later, attempted to steal a CPD officer's bicycle.

According to Cincinnati Police, 28-year-old Imani Brazile has been charged with Failure to Disperse, a misdemeanor charge, and Harassment by Inmate by Bodily Fluid, a fifth-degree felony. Police said 19-year-old Brandonlyn Wilson would be charged with Failure to Disperse and will be charged in connection to the theft of a Cincinnati Police officer's mountain bike.