On second night of protests, demonstrators flow up into Clifton Heights near UC 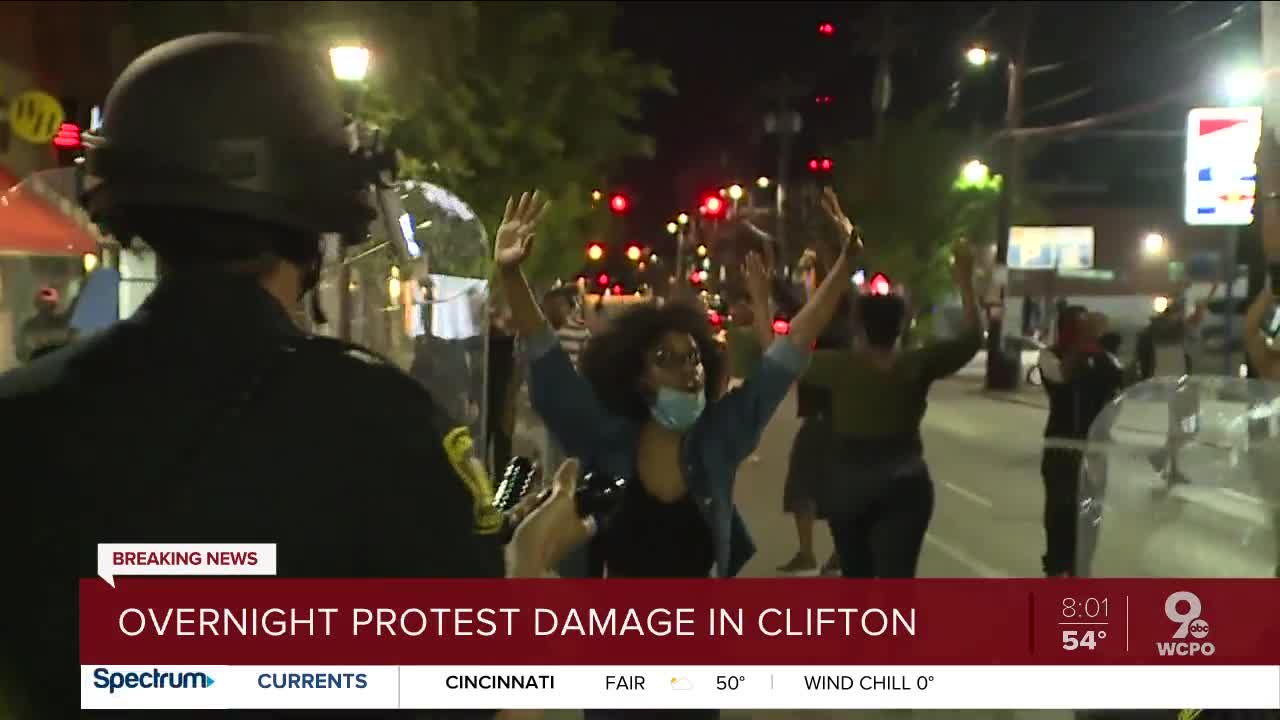 A Cincinnati police officer barely escaped a bullet during a confrontation with protesters overnight, police said, and Downtown and Over-the-Rhine seemed to dodge a bullet, too. 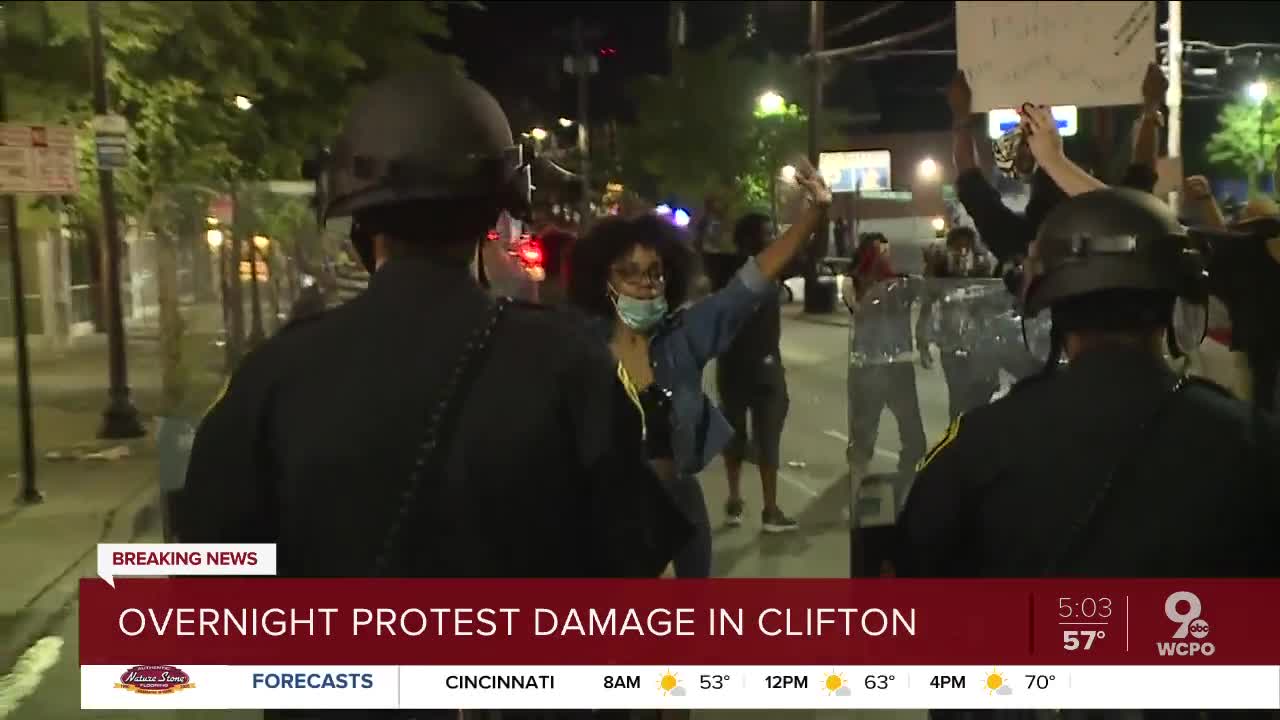 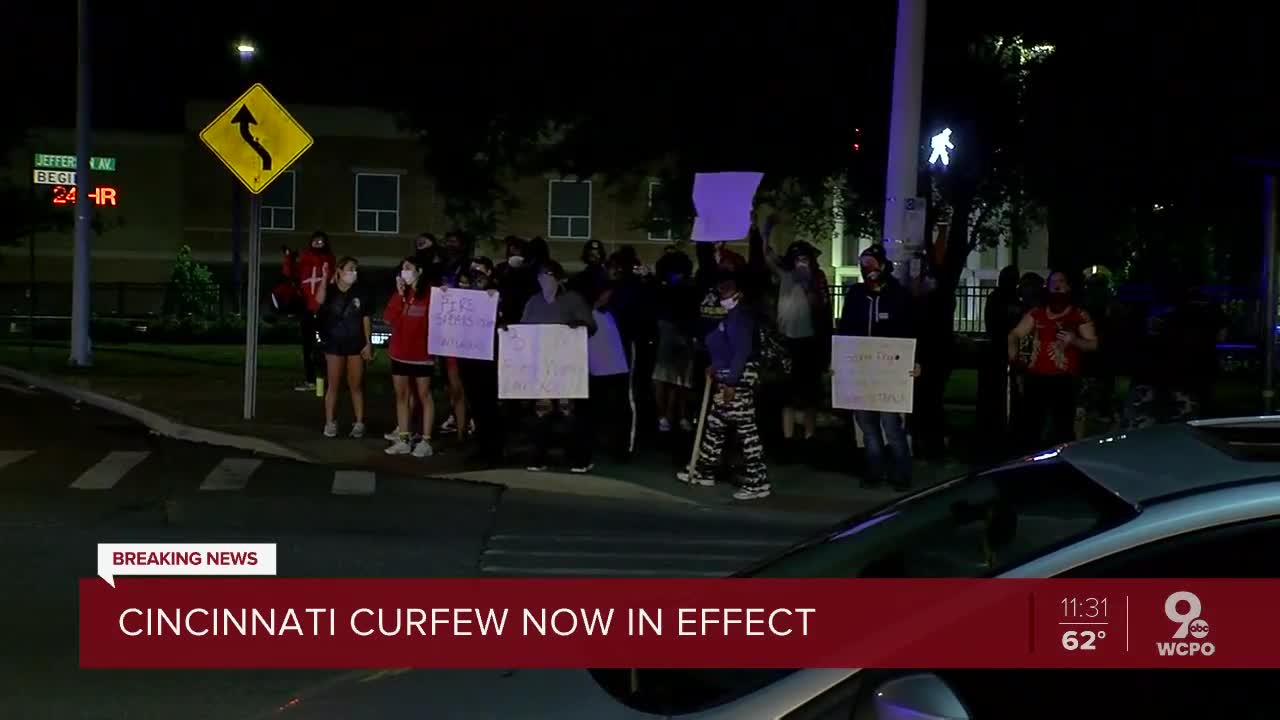 CINCINNATI — A Cincinnati police officer barely escaped a bullet during a confrontation with protesters overnight, police said, after a second night of demonstrations across multiple neighborhoods.

The bullet hit the officer's ballistic helmet as Cincinnati police worked to disperse a "disorderly crowd" near the University of Cincinnati at 12:23 a.m. Sunday, but the officer was not injured, according to a police statement. Police first reported that the bullet hit an Ohio State Highway Patrol trooper's helmet but corrected that.

Otherwise, there might have been a much different story to a second night of protests that appeared to end with less violence and damage than the first.

As protests of the Minneapolis police killing of George Floyd spread to Clifton Heights, the damage spread there, too. Front windows were busted out at Adriatico's, a popular pizza place, and Mr. Tuxedo on West McMillan Street. But overall damage did not appear as widespread as Friday night, when numerous windows were smashed and a few businesses were looted in Over-the-Rhine and Downtown.

Police preparing for something at Ohio and McMillan. ⁦@WCPO⁩ pic.twitter.com/594Kj0jVFy

City officials are expected to hold a briefing on Saturday's activity, and they may expand the curfew to Clifton Heights after trouble – whether caused by protesters or outside agitators – there late Saturday.

A Sunday "Rally for Justice" is set for 3 p.m. at Inwood Park in Mount Auburn.

Saturday's scheduled march started at noon at Washington Park, but the long day of protests and confrontations with police didn't appear to end until 15 hours later near UC.

Police resorted to tear gas, pepper balls and pepper spray at times to disperse crowds, and some protesters threw water bottles and fireworks and spit at police.

Saturday's march was mostly peaceful, but it led to a tense standoff with police at District 1 headquarters. Once the crowd left, police effectively stopped it from marching back into Downtown by blocking off streets and diverting protesters, and then dividing them into smaller groups.

Some protesters then headed to Clifton Heights, since the curfew only applied to Over-the-Rhine, the Central Business District, Downtown and The Banks. Police steered some away by keeping a large presence at both ends of the Vine Street hill – at Liberty at the bottom and at McMillan at the top.

SEE a photo gallery from the protests.

Small, incremental fires have been set along Vine St. Thank you @CincyFireEMS @IAFFLocal48 for your continued service to our city and your dedication to keeping us all safe!

There were some tense standoffs on McMillan, even after police appeared to give protesters ground and time to regroup and shout their messages. Police, SWAT and state troopers eventually marched from one end of McMillan to the other, breaking up the crowd by lining up across the street, banging their shields and shouting, "Move! Move!"

At several points police appeared to use tear gas cannons, and there were a few sightings of police forcibly engaging protesters by hand.

A woman was taken into custody after several protesters set large garbage dumpsters on fire across McMillan Street. A few feet away, the windshield and passenger window on a parked police car were smashed. Later, police pulled another woman out of a car in the CVS parking lot and appeared to arrest her and three others in the car.

As the night turned to Sunday morning, police seemed to have worn down the protesters. By 2:45 a.m. WCPO's Jasmine Minor reported that police had headed out of the area to report for shift change, and the confrontation appeared to be over.

For most of Saturday afternoon, the march was peaceful.

Protesters marched through Cincinnati streets for hours holding signs and chanting slogans like "I Can't Breathe" and "Black Lives Matter."

The large crowd wound through the city from Washington Park to the Hamilton County Courthouse, then moved to The Banks and finally to District 1 Police Headquarters.

Police officers in riot gear, including body shields, helmets with face-masks and bullet-proof vests blocked the entrance to their headquarters.

Around 9 p.m., Cincinnati police attempted to disperse the crowd with flash-bang grenades and tear gas. Shortly after that, protesters threw fireworks at police in the Music Hall side parking lot.

Police in riot gear are trying to scatter the crowd. Lots of tear gas. @WCPO pic.twitter.com/ceGBQfkLMV