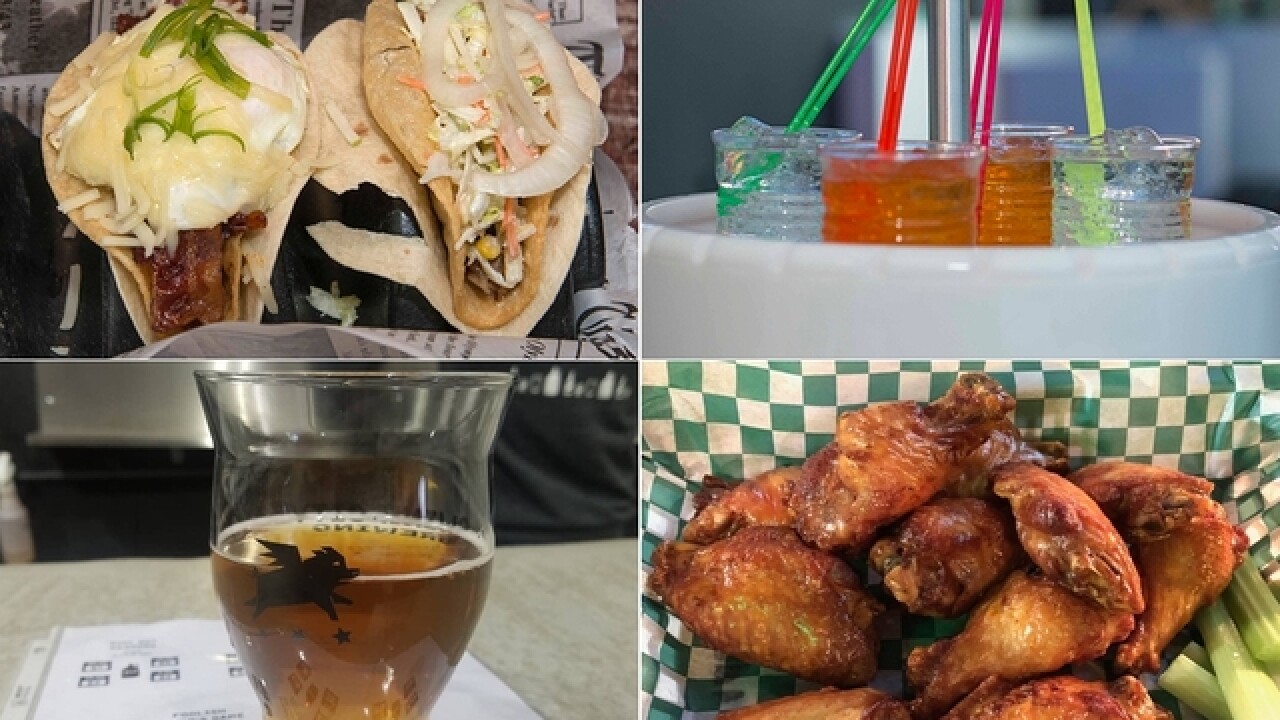 CINCINNATI -- It can be hard to keep track of how many new restaurants, bars and breweries have opened in the Queen City: At least 20 new places have opened since November.

Don't worry, though. We've rounded up most of those new places to help you plan your next culinary adventure.

This quick and healthy restaurant option opened Nov. 18 in Over-the-Rhine. Poke Hut lets you garnish a poke bowl with fresh ingredients. Most bowls include a base of rice or veggies, protein and sauces. For more information visit www.pokehutusa.com.

Bird is definitely the word at this carryout-only chicken joint that opened Feb. 10 in Over-the-Rhine. CityBird is the brainchild of the Thunderdome Restaurant Group, which opened the Eagle OTR right next door in 2013. CityBird's stripped-down menu includes chicken tender packs, three chicken tender sandwiches and a salad. There is no seating inside the restaurant, which is primed for fast service. For more information visit www.citybirdotr.com.

This barbecue joint started out as a food truck and built a following. In late November, Pickles & Bones found a brick-and-mortar home in Milford to serve carryout. For more information visit www.picklesandbones.com.

Owner Buck Buchanan quietly opened a second location of his Buck's BBQ & Premium Elite Foods in early January. Buchanan's first barbecue and butcher shop, which he opened in Covington's Latonia neighborhood four years ago, has gained a reputation for quality meats. Buchanan said the new Dayton, Kentucky, store is building on that reputation with the same quality food and service. For more information visit premiumelitefoods.com.

Mark Wahlberg stirred buzz when he visited Cincinnati in August to announce that he and brothers Donnie and Paul would open a Wahlburgers downtown. The burger joint and bar opened on Jan. 26. The restaurant boasts 20 beers on tap, flat-screen televisions and an eclectic menu of sandwiches, sides and salads. For more information visit the location's Facebook page.

This bourbon, tequila and taco bar opened on Feb. 8 with a mission to bring late-night dining to Covington's business district. Located in the former location of Rima D's, which closed in December, Agave & Rye boasts 75 different tequilas, 80-plus whiskeys and an eclectic list of tacos. For more information visit www.agaveandrye.com.

This upscale pizzeria opened its doors Downtown on Dec. 9. At the heart of Midici's operation is a U-shaped bar that surrounds two wood-fired pizza ovens, a gourmet coffee bar and cocktail bar. Midici's Neapolitan-style pizzas are made with fresh, GMO-free ingredients and cook in about 90 seconds. The restaurant offers a relaxed atmosphere with its live olive tree and black-and-white Italian films projected on one wall. For more information visit www.mymidici.com.

The Oxford restaurant and microbrewery opened its second location Jan. 17 in Hamilton. The new location boasts the same quality food and beer as the original, plus a rooftop patio overlooking the Great Miami River that will open once the weather warms up. For more information visit qbbrewery.pub.

The popular brunch spot's third location opened Downtown on Jan. 29. Many of the same menu items found at the cafe's Oakley and Blue Ash locations are served at the new place. The eatery added some grab-and-go options for the weekday morning business crowd. For more information visit sleepybeecafe.com.

This casual Over-the-Rhine bar opened in early November. The Pony serves several local beers either on tap or in cans and bar cocktails. It serves mostly pub-style food, including some fantastic chicken wings. For more information visit the Pony's Facebook page.

Four Entertainment Group (4EG), the company behind bars and restaurants such as the Lackman and the Mount Adams Pavilion, opened one of its newest bars on Dec. 23. The company spent months remodeling the space formerly occupied by the Famous Neon's Unplugged in Over-the-Rhine. Rosedale will offer prime patio drink sipping when the weather warms up. For more information visit rosedaleotr.com.

The owners of the Sleepy Bee Cafe opened the Aster Social Sippery bar on the third floor of the cafe's new Downtown location on Jan. 5. Aster serves cocktails and bar bites during the evening and brunch on Saturdays and Sundays. For more information visit www.asteronfourth.com.

The craft beer bar franchise's second Greater Cincinnati location opened Jan. 8 in Florence. The first local Brass Tap opened at 251 Calhoun St. near the University of Cincinnati in 2013. The Florence bar has 60 beers on draft and stocks about 150 others in cans and bottles from around the world. The Brass Tap also regularly hosts live music and special events, and there are plenty of televisions to watch sports, too. For more information visit www.brasstapbeerbar.com.

Urban Stead Cheese is the only place in the city of Cincinnati to make cheese on-site. The cheese shop and tasting room owners use locally-sourced milk to produce its various cheeses, a process costumers can watch through windows installed in Urban Stead's tasting room that look into the production area. Initial cheese offerings at the shop, which officially opened Friday, Feb. 23, include fresh cheese curds, beer cheese, a Camembert-style cheese and quark. Urban Stead will also offer aged cheddar in six-to-eight months. The shop also offers an array of wine, beer and cocktail pairings. For more information visit www.urbansteadcheese.com.

It was a circus in Ludlow when Bircus Brewing Co. opened its taproom in December. The microbrewery funded through individual equity shares was born out of Circus Mojo. Bircus and the circus continue to look for investors to help renovate the theater where both are located. For more information visit bircus.com.

This microbrewery hosted a series of soft opening events starting the week of Dec. 19. Located near the Little Miami Scenic Trail in Milford's historic downtown district, the brewery opened with nine beers on tap and serves brick-oven pizza. Its owners hope to cater to bicyclists, runners and canoeists when the weather warms up. For more information visit www.littlemiamibrewing.com.

Sing the night away

Gorilla Cinema owner Jacob Trevino introduced something new to Downtown when he opened the Japanese-style karaoke bar Tokyo Kitty on Feb. 9. Customers can rent one of seven private karaoke rooms by the hour or dance the night away on a public dance floor. Tokyo Kitty also uses Bbot, an automated drink delivery service, to bring people cocktails that can be ordered via smartphone. For more information visit www.thattokyobar.com.