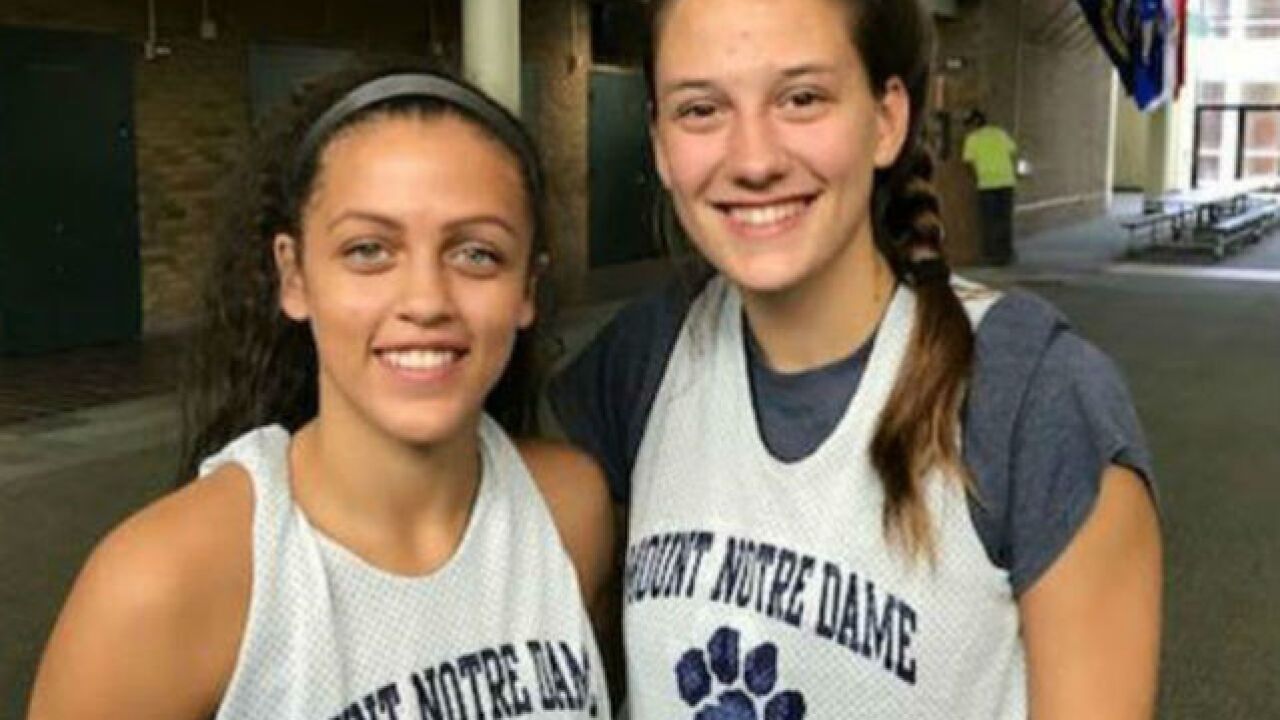 Copyright 2018 Scripps Media, Inc. All rights reserved. This material may not be published, broadcast, rewritten, or redistributed.
<p>Mount Notre Dame seniors Gabbie Marshall (left) and Julia Hoefling will be among the leaders for the No. 1 state-ranked Cougars this season. (Photo by Mike Dyer/WCPO)</p>

CINCINNATI – The Ohio high school girls basketball season is right around the corner.

While many of the area’s top teams are expected to reload this winter, there certainly will be a level of intrigue regarding which of them will emerge as the regional champion.

The Cincinnati area has had a Division I representative in the state Final Four for five consecutive seasons. That trend may continue in 2019.

"It's consistently the toughest district and region to get out of in Division I (in the state)," said Ohio Girls Basketball Report Associate Director Bryce McKey.

Here are nine storylines to watch when the season opens Nov. 23.

The Journey to the Tourney

The Ohio Girls Basketball Report’s Third Annual Journey to the Tourney again has collected some of the state’s top teams in a special kickoff weekend showcase Nov. 23-25 at Lakota West.

This is an excellent primer for the start of the season. Dozens of college coaches will be in attendance in order to scout the area's top players. This is the first time the event will be three days. Over 50 Division I college commits or prospects will be in this event.

Huismann had a 696-337 record at Mercy since the 1972-73 season. Mercy had its final basketball season last winter before the school closed.

Huismann, an Ohio Basketball Hall of Famer, accepted the Talawanda position in May. Mercy and McAuley closed their doors and formed Mercy McAuley High School starting this school year.

MND is the preseason No. 1

Mount Notre Dame is ranked No. 1 in the OGBR preseason Division I state rankings. The Cougars (22-5) were a Division I regional semifinalist last season after winning the 2017 state title.

RELATED: MND seniors Gabbie Marshall and Julia Hoefling have a special connection on the court

MND is tied with Pickerington and South Euclid Regina for the most state girls basketball titles in Ohio High School Athletic Association history. MND is the only active program among the three schools.

Is this the year for Mason?

The Comets were a Division I state semifinalist in 2018 – their second state Final Four trip in three seasons (2016 state runner-up). Coach Rob Matula said last season’s team was his favorite in 30 years of coaching. This group seems to be an extension of the leaders from last season.

The Comets have the talent for another deep run including senior forward Sammie Puisis (Florida State commit), who averaged 16.9 points, 6.1 rebounds, 2.9 steals and 1.4 assists last season.

Puisis shot nearly 42 percent from beyond the three-point arc. Puisis, a two-time Greater Miami Conference Player of the Year, has continued to develop her leadership skills.

“She is kind of an extension to our coaching staff now along with a number of our other girls,” said Matula. “You have to expect that she is going to score and rebound for you and do a lot of things because that is a natural thing for a talented person like her. I expect her to continue to improve.”

Look for senior guard Sade Tucker and junior guard Megan Wagner. Junior guard Alanna Carter (Akron verbal commit) had an excellent summer and her physicality has improved. Mason is ranked No. 6 in the OGBR preseason rankings.

Lakota West (25-3) is tied with Walnut Hills at No. 10 in the OGBR preseason rankings. The Firebirds may not be as highly ranked in the preseason as in recent years, but you can never count out coach Andy Fishman's squad once tournament time arrives.

"There are playmakers on both sides of the ball," Fishman said. "We need to get better playing together -- learning strengths of our teammates to set them up for greater success."

The Firebirds have won the GMC four consecutive seasons, including a pair of co-titles with Mason the past two seasons.

A simple goal for Walnut Hills

Walnut Hills (25-2) won the district title for the second time in program history last season, including its first since 2010. Senior Kennedi Myles (Miami University), the back-to-back Eastern Cincinnati Conference player of the year, has become a better ball-handler and distributor and has improved defensively, according to coach Adam Lazar.

"Walnut Hills had a breakout year last year," McKey said. "We expect them to have another great year led by Kennedi Myles."

Look for juniors Sean Kelly Darks and Darian Burgin – both of whom have multiple scholarship offers – to be among the most underrated players in the city. Darks averaged 11.4 points, 4.4 rebounds, 3.0 assists and 3.0 steals last season.

“The district title was an amazing experience for the girls and the program,” Lazar said. “It was the reward for the greatest season in school history. But our motivation this offseason was the regional semifinals against Lakota West. We have built this program to the point that we shouldn't be surprised to be playing in the regionals -- we should be expecting it. Our goal this year is very simple. We want to play for a chance to go to Columbus.”

Depth will be the strength for the Wolves in the program’s first season.

“Combining schools allowed us to get some pretty good players that are able to contribute right away,” said Mercy McAuley coach Nick Baltimore, a former MND assistant.

The Wolves will be led by players that include junior guard Lexi Fleming, senior guard Jenna Schoster and junior forward Alex Smith.

“I think Lexi playing better competition over the summer has made her just a better all-around basketball player,” Baltimore said. “She has shown more ability to score the ball from all three levels.”

Schoster will be counted on offensively to take some pressure off Fleming in terms of handling the ball and running the team. Smith is able to score but also rebound as a 6-footer.

Classic in the Country Challenge

The annual Classic in the Country Challenge during Martin Luther King Jr. Day weekend will provide plenty of opportunities for area teams to be challenged against some of the state's top teams.

Watch to see how Mason, Lakota West and Mount Notre Dame fare in this event in Berlin, Ohio. It could very well be a preview of the state Final Four in March.

"Southwest Ohio is as strong as it's ever been," McKey said.

Summit Country Day is 44-0 the past two regular seasons and looking to take the next step to Columbus. Summit is tied with Ottawa Glandorf for No. 10 in the OGBR Division III state rankings.

"As we progress throughout this preseason into the regular season, I’m looking for this group to develop a sense of team chemistry," Summit coach Beth Simmons said. "Due to losing four starters that contributed 85 percent of our scoring, I am looking for these young players to step up and emerge as impact players."