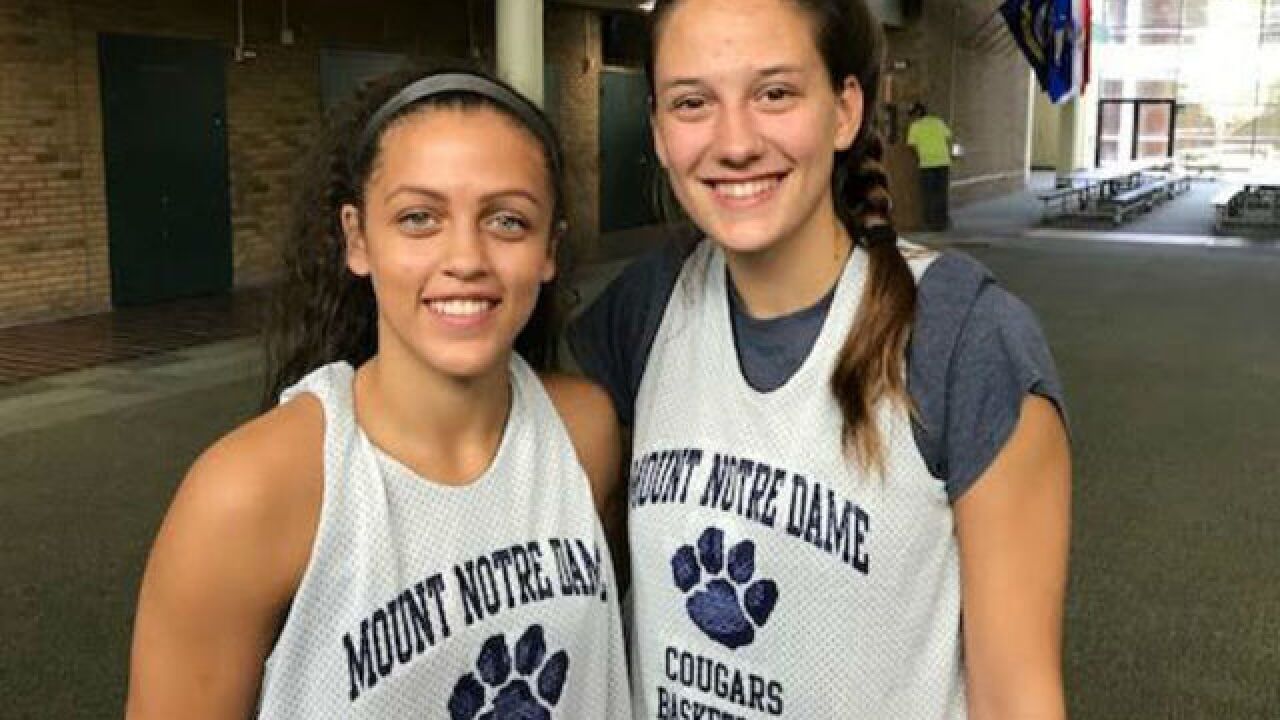 Copyright 2018 Scripps Media, Inc. All rights reserved. This material may not be published, broadcast, rewritten, or redistributed.
<p>Mount Notre Dame senior guard Gabbie Marshall (left) and senior forward Julia Hoefling helped to lead the Cougars to a 2017 Division I state title. The standouts are among the leaders for a very talented MND squad this upcoming season. (Photo by Mike Dyer)</p>

MONTGOMERY, Ohio -- Gabbie Marshall and Julia Hoefling used to sit behind the Mount Notre Dame bench during the 2015 postseason tournament and think what it would be like to play for the Cougars.

They saw the enormity of Kettering Fairmont's Trent Arena during the regional tournament and the intensity level that could hardly be matched in a regional final against Lakota West.

Three-and-a-half years later, Marshall and Hoefling -- now MND seniors -- have experienced those big-time moments including a Division I state championship in 2017 .

"On the floor they have this connection that is really special," MND coach Dr. Scott Rogers said. "They've always had it, and everyone feeds off of them. I expect them to have really good years."

The MND standouts aren't finished. Marshall, an Iowa commit, and Hoefling, a Loyola University Chicago commit, and four other seniors want to add to their legacy.

"Their mindset is no different than ours has been since I've been here and that is they want to get to Columbus and win a state championship," Rogers said. "They work their rear ends off all the time to try to be as good as they possibly can be -- both as basketball players (and) as young ladies, too."

Marshall, a guard, and Hoefling, a forward, reflected upon their MND career during a brief break from the Ohio Girls' Basketball Reports' Crystal Ball Monday afternoon at Sycamore High School. The chemistry was evident.

"It was probably one of the best summers we've had in our high school career," Hoefling said. "We were really together this summer. We were one unit."

MND (22-5), a Division I regional semifinalist last season, might just be the most talented team in the state when the season opens in November.

Freshman 5-foot-11-inch guard K.K. Bransford was also very impressive during the Crystal Ball Monday and is certainly one of the state's top players in the 2022 class. Junior Makira Cook was second-team all-GGCL as a freshman.

The Cougars participated in team camps at Ohio State and Xavier in June and Rogers was impressed with the level of focus and competitiveness from the squad. Rogers expects excellence and it's no difference with this group.

MND opens the season against Columbus Africentric in the Journey to the Tourney in November at Lakota West. Rogers said it's been refreshing to see the level of commitment the seniors have had this summer.

The players have motivated each other. For the seniors, this season carries an extra sense or urgency.

MND is tied for the most state girls' basketball titles in Ohio High School Athletic Association history with Pickerington and South Euclid Regina. MND is the only active program among the three schools. The Cougars want to add another chapter.

"It's an honor to be out here playing for MND," Marshall said. "Just the legacy they've had in the past -- to be able to continue it -- it's just awesome."