Moeller's Jaxson Hayes has been an 'astonishing' rim protector for Crusaders 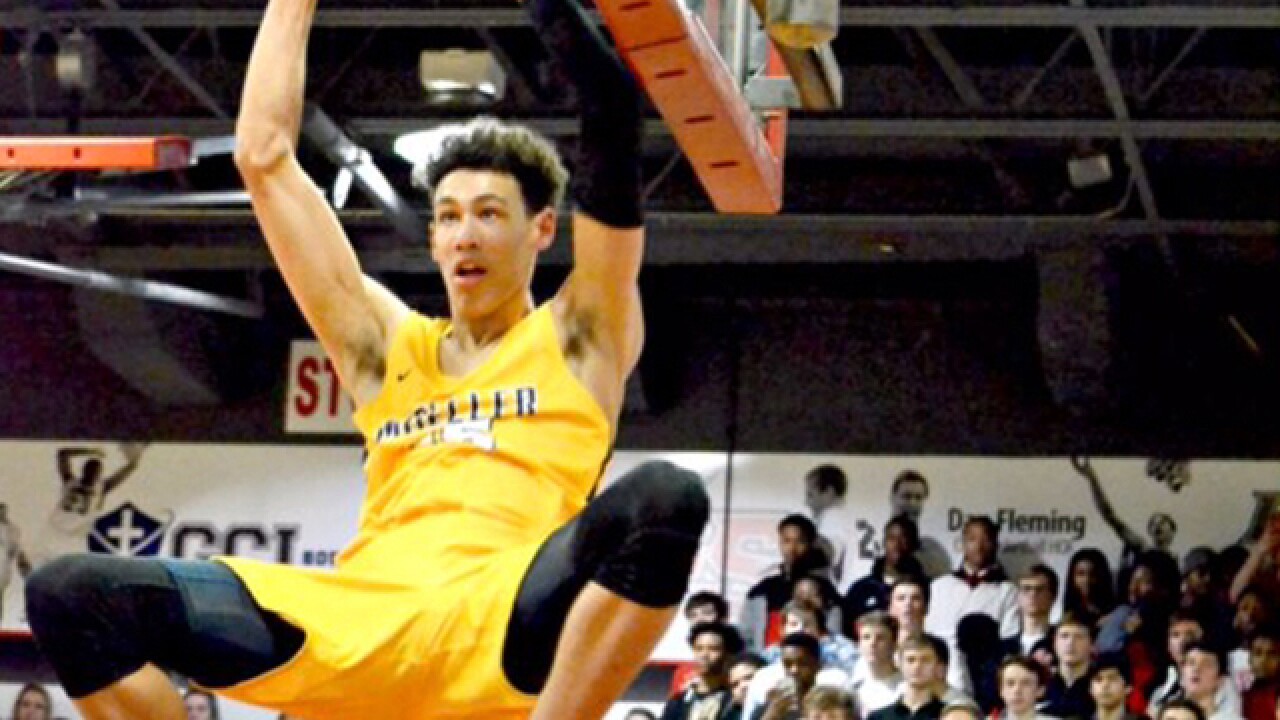 It was simply one of those days for the Moeller 6-foot-10 senior forward where everything near the rim seemed like an opportunity against Kettering Fairmont.

Whether he pivoted across the lane and used his length to pin a shot against the backboard, stopped a driving player cold in his tracks in the paint or prevented a shot attempt, the University of Texas signee was a defensive force.

“He has such great timing and let’s you think you have a chance to make the shot and then the next thing you know he’s sending the ball in a totally different direction,” said Moeller junior guard Miles McBride.

Hayes had seven blocks in the Crusaders’ 65-50 win over Fairmont in a Division I district final. He was just two away from a career-high he set twice during the regular season (against Clark, Nevada Dec. 29 and at St. Xavier Feb. 9).

Moeller (23-3) will make its fifth consecutive regional tournament appearance Wednesday when the Crusaders play Springfield (21-4) in a semifinal at 6:15 p.m. at Xavier University’s Cintas Center.

Hayes, the son of Bengals tight ends coach Jonathan Hayes and former college basketball All-American Kristi (Kinne), has been a significant reason why the Crusaders have enjoyed a defensive resurgence this second half of the season.

“He’s really the most freak athlete we’ve ever had in our program,” Moeller coach Carl Kremer said. “He’s just scratching the surface of his ability. He’s literally getting better every week.”

Hayes, named the Greater Catholic League South Division Defensive Player of the Year, has a school-record 106 blocks this season, according to Moeller statisticians Steven Albrinck and Jai Schiavone.

Hayes is averaging 4.1 blocks – virtually unheard of in the high school game. The number of altered shots or untaken shots would be difficult to quantify.

Because of Moeller’s deep roster during last season’s Division I state runner-up finish, Hayes never started a varsity game prior to this season. He had 37 blocks last season.

This past offseason, Hayes emerged as one of the nation’s most sought-after players in the 2018 class as an athletic rim protector and finisher with a guard skill set who can run the floor.

“The great thing is he understands he’s our anchor on defense,” McBride said. “He is becoming more of a vocal leader while seeing the whole floor and is letting guys know what’s going on.”

Besides Texas, Hayes also garnered scholarship offers from the likes of Kentucky, Xavier, Georgetown and Butler before he verbally committed to the Longhorns in late September and signed in November.

He went from about 180 pounds to 210 pounds. His improved skill set has paid dividends on both ends of the floor.

Hayes also averages 11.8 points, 7.0 rebounds and 1.1 assists while shooting 64 percent from the field.

Moeller has had very talented forwards and centers over the years (think Josh Duncan, Andrew Brackman and Nate Fowler) but Kremer has never had a rim protector quite like Hayes.

“It’s been an explosion of his talent,” Kremer said of his standout’s progress this season.

Hayes agrees with the assessment he is improving each week. He says he’s learning to do the little things better like blocking out and reading whether an opposing player wants to drive or pass.

Those aspects of his game are needed this time of March. Hayes says he’s enjoyed the tournament run and hopes the Crusaders have another chance to return to Columbus next week after a heartbreaking loss to Massillon Jackson in 2017.

Moeller has had new starting personnel this season, but those players haven't missed a beat in analyzing scouting reports and performing on the court.

“This team has really had, I think, a monumental challenge,” Kremer said. “Four new starters, but everyone has expected them from Day 1 to be a great team. It’s taken this team a while to get where they are, but I think you saw (Saturday) the team defense has really, really improved in the second half of the season.”

Like his coach and teammates, Hayes is taking nothing for granted.

“Everyone is always like, ‘Oh, you are going to whoop them because you guys are you’,” Hayes said. “But it’s not that simple. We have to always bring our game every day. If we slack once, we are going to lose because everyone is going to bring their best against us.”