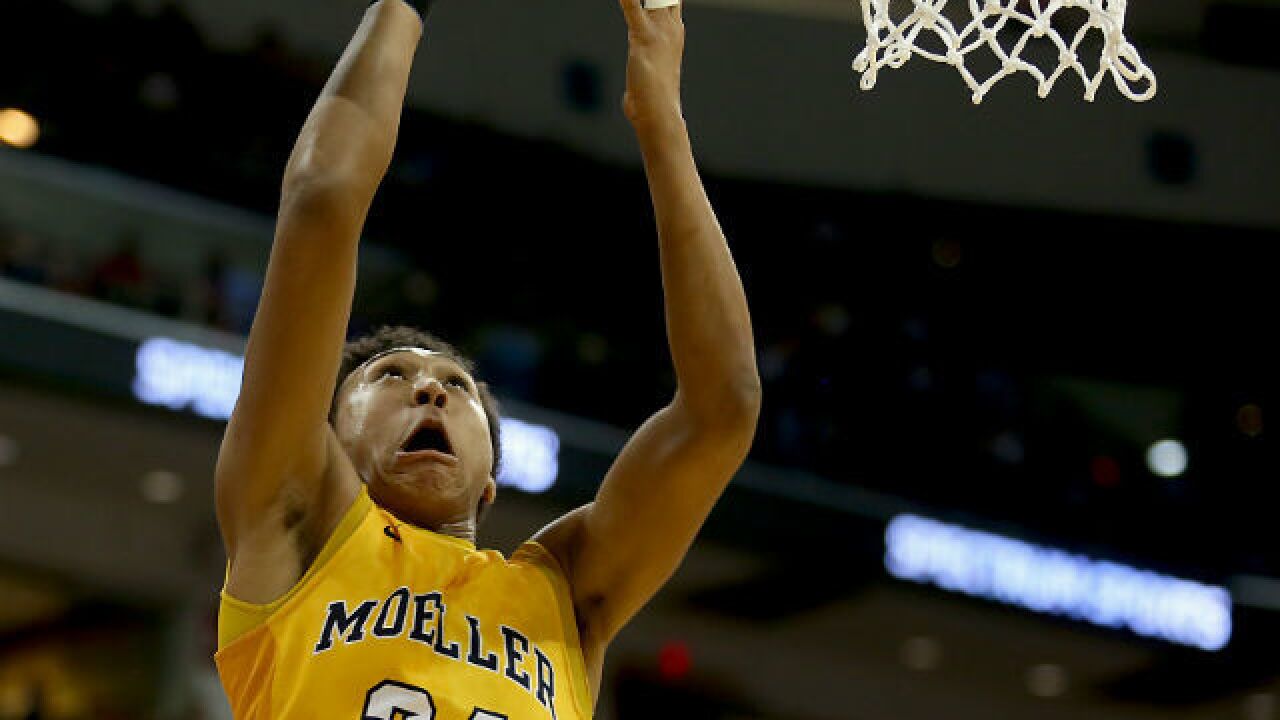 Copyright 2017 Scripps Media, Inc. All rights reserved. This material may not be published, broadcast, rewritten, or redistributed.
<p>Moeller guard Jeremiah Davenport adds to his points against Pickerington during their Division I state semifinal game at the Schottenstein Center in Columbus Friday, Mar. 24, 2017. (Photo by E.L. Hubbard)</p>

COLUMBUS, Ohio – This year’s Moeller basketball team will be remembered as one of the greatest to ever wear the blue and gold.

No one can ever doubt that on Montgomery Road. Each of the 19 players represented a key role to a squad that was nearly perfect in its win-loss record throughout the season.

One game certainly won’t define a team that set the program record for most wins and went undefeated for the entire regular season.

The Crusaders withstood the pressure of being in the spotlight the entire winter. Moeller was Ohio’s No. 1-ranked team and in the top 15 nationally. A fishbowl as one player called it.

But, the Crusaders faced a cruel reality late Saturday night at the Schottenstein Center when it lost to Massillon Jackson 39-38 in the Division I state final.

It would be simply unfair to pin an entire season on one final possession or a shot that hit the backboard but missed its intended mark before time expired; the Crusaders accomplished too much for that to be the lasting memory.

The tears in the players’ eyes and the downcast look on the coaches’ faces during the state runner-up trophy ceremony showed how much this group invested into the past five months of the season.

“I just feel bad for our guys,” Moeller coach Carl Kremer said with emotion in his voice. “They worked hard. They did everything the right way. It didn’t work out tonight. I am going to leave it at that.”

Senior guard Keegan McDowell had 14 points and eight rebounds and played through a hard shot to the left eye in the third quarter.

The Crusaders rallied from a fourth-quarter deficit in the state semifinal to defeat Pickerington Central and would have to rally again Saturday night.

Jackson led by three until McBride made a free throw at the 2:40 mark and followed that up with a long jumper to tie the game at 34 just 32 seconds later.

But Jackson made a 3-pointer to go ahead 37-34. Moeller junior guard Jeremiah Davenport made two free throws with 1:08 left to cut Jackson’s lead to 37-36.

But, an intentional foul called on Moeller with 49 seconds left caused the Moeller coaching staff to erupt in dispute.

Jackson senior guard Logan Hill made a free throw to give the Polar Bears a two-point lead (38-36).

Kremer was incredulous at the official’s call.

“They have a young man that we wanted to foul,” Kremer said. “We operate at 100 percent with what we understand the rules are. No hands. We bumped him, we bumped him. The referee wouldn’t call it. He bumped him again and he called it intentional. No hands. Our understanding of the rules is that should’ve been a foul and he was shooting a one-and-one and not an intentional. Big call in the game.”

Jackson retained possession and nearly scored again in the paint until McBride made an incredible block to give Moeller the ball back. McDowell made two free throws to tie the game at 38 with 23.8 seconds left.

Jackson senior forward Kyle Young, a Butler signee, was fouled on the next possession and made a free throw which proved to be the difference with 2.8 seconds left.

“We wanted to put pressure on him,” Kremer said. “I don’t think we fouled him. I will watch the film. Pretty quick call on one bounce. Look, we have to deal with it. That’s the game of basketball. Our kids fought. They’re the greatest kids. But, tonight it didn’t work out for us and we have to accept that.”

Moeller missed the final shot before the buzzer sounded.

Young had just five points on 1 of 10 shooting but grabbed 10 rebounds.

“Hard fought game,” Kremer said. “They’re really good. They’re really big and they’re solid, so it was very hard for us to get good looks. I didn’t think the game went our way all night but our guys fought like heck and we got ourselves right into right at the very end and had a chance to win and things didn’t go our way.”

Moeller made its fifth state final appearance Saturday night. Moeller was the Division I state runner-up to Jackson in 2010.