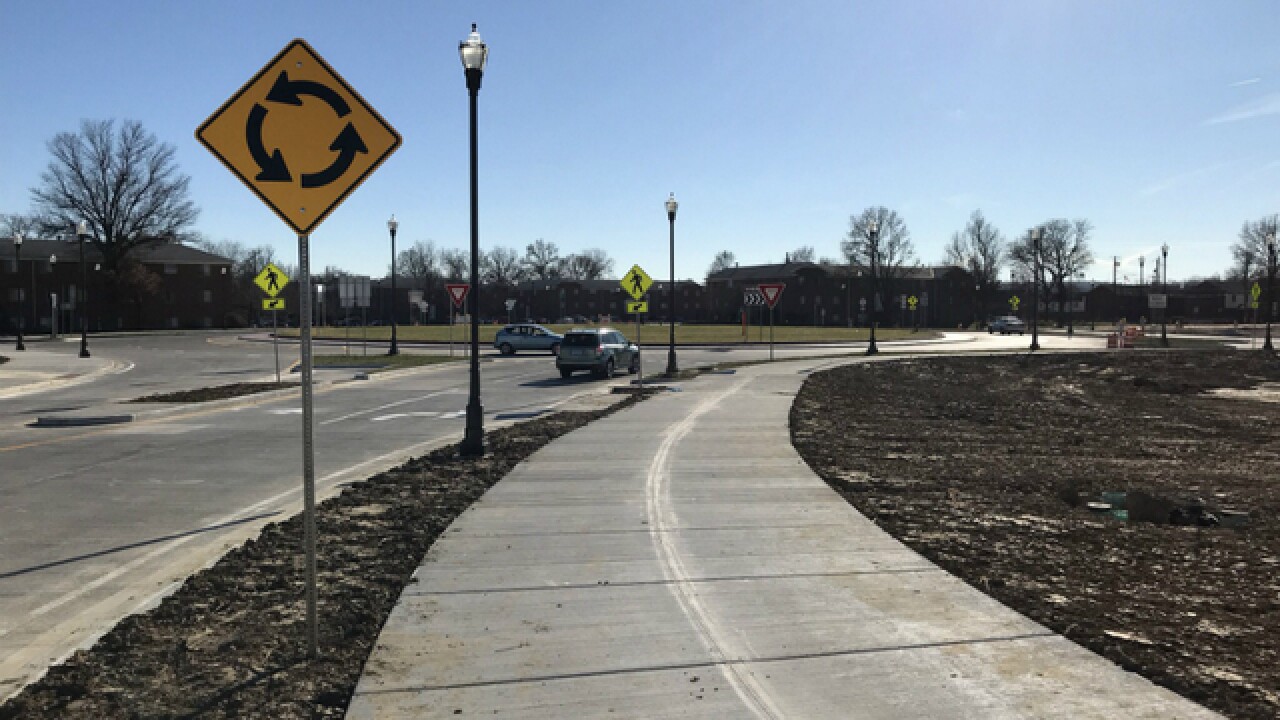 NEWPORT, Ky. -- After more than a year, two major Northern Kentucky intersections have re-opened, but with a twist.

Major construction on two new roundabouts wrapped up Thursday -- one connecting Fourth and Fifth streets at the base of the Fourth Street/Veterans Memorial Bridge, and the other at Third and York streets near the Taylor Southgate Bridge and Newport on the Levee.

Opening the roundabouts means some new traffic patterns for the area, effective Thursday:

As WCPO previously reported, roundabouts are becoming more common throughout the Tri-State, and local drivers are still getting used to them. Others are popping up across the river, too.

One of the region's first was the roundabout at the Cincinnati entrance to the John A. Roebling Suspension Bridge at The Banks.

READ MORE: Are Cincinnati drivers learning to use roundabouts?

Cincinnati Vice Mayor David Mann in September proposed a roundabout as a solution to heavy traffic at Knowlton's Corner in Northside.

Third and York streets in Newport attract a high volume of pedestrian traffic, too, with Newport on the Levee, U.S. Bank Arena and Great American Ball Park all nearby. Reds fans commonly park in Newport and walk across the Taylor Southgate Bridge on game days.

The roundabouts were the second of three phases of the larger expansion of Ky. 9, which runs north-south through Campbell County. Most of Ky. 9 south of Newport runs along the AA Highway, roughly following the Ohio River into northeastern Kentucky.

The new Ky. 9 will connect Interstate 275 in Wilder to the Taylor Southgate Bridge.

"The northern section was a big part of the overall Ky. 9 expansion," said Bob Yeager. Yeager is the chief district engineer for KYTC's District 6, which oversees highway work in 11 counties across Northern Kentucky.

"The new improvements will offer better connectivity and enhance economic opportunities not only for the city of Newport but for the entire region," he said.

IN DEPTH: Ky. 9 extension will be a 'traffic game-changer'

Business owners attribute recent development in Newport's west side to the road's revamp, including New Riff Distillery owner Ken Lewis. He told WCPO, "We're all going to be surprised (at the impact). It's going to be a very busy road."

New Riff is building a new campus near the 11th Street bridge, just a few blocks south from the new roundabouts, in the former Greenline Trolley and bus system building.

"Where in an urban area can you get five or 10 acres of land and literally be Downtown in minutes or to I-275 in 12 minutes?" Lewis said.

City leaders see the new roundabouts as a rebirth for the city's entryways.

In an October news conference, City Manager Tom Fromme said, "The city of Newport is excited with this once-in-a-career -- really, once-in-a-lifetime -- opportunity. It's very rare...when you have an opportunity such as this to redesign, to revision the entrances to your city."

Fromme made his remarks shortly after Jack Moreland, who heads up the Northern Kentucky economic development engine Southbank Partners, unveiled plans to install decorative monuments at each of the new roundabouts.

The Ky. 9 redesign has been on Newport leaders' minds for more than a half-century, Moreland said.

"Since 1964, they've been talking about a boulevard along the west side of Newport," he said.

Construction on the redesign began in 2012. The new, 1.4-mile road -- once completed in 2018 -- will have two lanes in each direction with sidewalks, bike lanes and on-street parking.

Previous reporting by WCPO contributor Vickie Ashwill was included in this story.