More and more roundabouts are arriving in Cincinnati, but are we learning how to drive them? 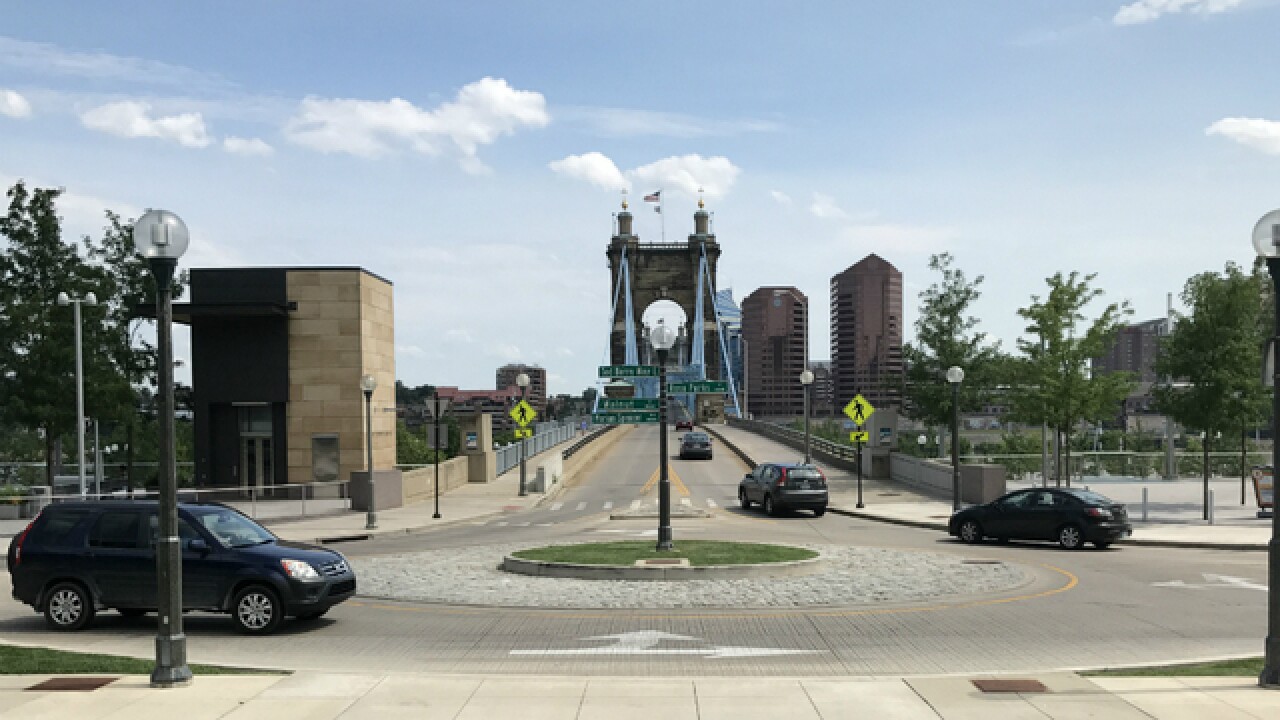 Copyright 2017 Scripps Media, Inc. All rights reserved. This material may not be published, broadcast, rewritten, or redistributed.
<p>The roundabout at The Banks' edge of the John A. Roebling Suspension Bridge is part of the region's move toward finally buying into circular intersection design. (Pat LaFleur/WCPO)</p>

CINCINNATI -- They're supposed to make intersections safer and more efficient, but with roundabouts only recently arriving throughout the region, a few Tri-State motorists are still rounding the learning curve. And there are at least five new circular intersections planned for or recently completed on local roads.

They've been in use elsewhere for more than a century, and in other U.S. cities for nearly three decades, but here in Cincinnati they're still relatively new. The intersections intend to keep traffic almost continuous without signals, using instead yield signs and a center island around which vehicles circle.

The principle is pretty simple, really: Once you're in the circle, others looking to enter yield to you.

Sometimes, though, drivers are thrown off by an intersection that doesn't require a full stop, which has remained much more common along U.S. roads. The lack of direct guidance as far as when to stop and go can lead to moments of hesitation, as well.

Here's 9 On Your Side's Live Drive for a demonstration:

And, as WCPO has reported previously, Cincinnati isn't exactly known for being home to the best drivers anyway.

Nevertheless, roundabouts are starting to pop up more and more. Recent projects include:

Transportation department and highway safety officials across state lines say the circular intersections make roads safer and traffic smoother for multiple reasons, but two stand out as the primary purpose: slower speeds and less likelihood of a serious collision.

Roundabouts also work to increase flow in high-density traffic areas, like at The Banks near the Roebling Suspension Bridge.

That's according to Phil Beck, The Banks' public partnership project executive. Beck said the combination of high vehicle and pedestrian traffic in the area made that intersection ideal for a roundabout design.

"We're in a pretty heavy pedestrian zone right here with Smale Riverfront Park," Beck told WCPO. "The Banks project particularly in the summer months has the fountains on either side and there are a lot of children in this area, so that's definitely beneficial to have vehicles slower and keep pedestrians safe."

Beck also said the Roebling roundabout is ideal because it maintains a single lane instead of multiple, further reducing the chance for a crash.

Not every intersection is meant for a roundabout, though, designers are sure to mention.

"It is a tool in the toolbox, but it’s not right for every location," said Tedd Hubbard, an engineer working for Hamilton County.

Beck remains confident, though, that area drivers are adjusting, especially due to regional designers "keeping it simple."

"It's been in place for a little bit over there years and I've received nothing but positive feedback," he said, emphasizing that more Cincinnati-area roundabouts are single-lane.

Previous reports by Juli Hale contributed to this story.