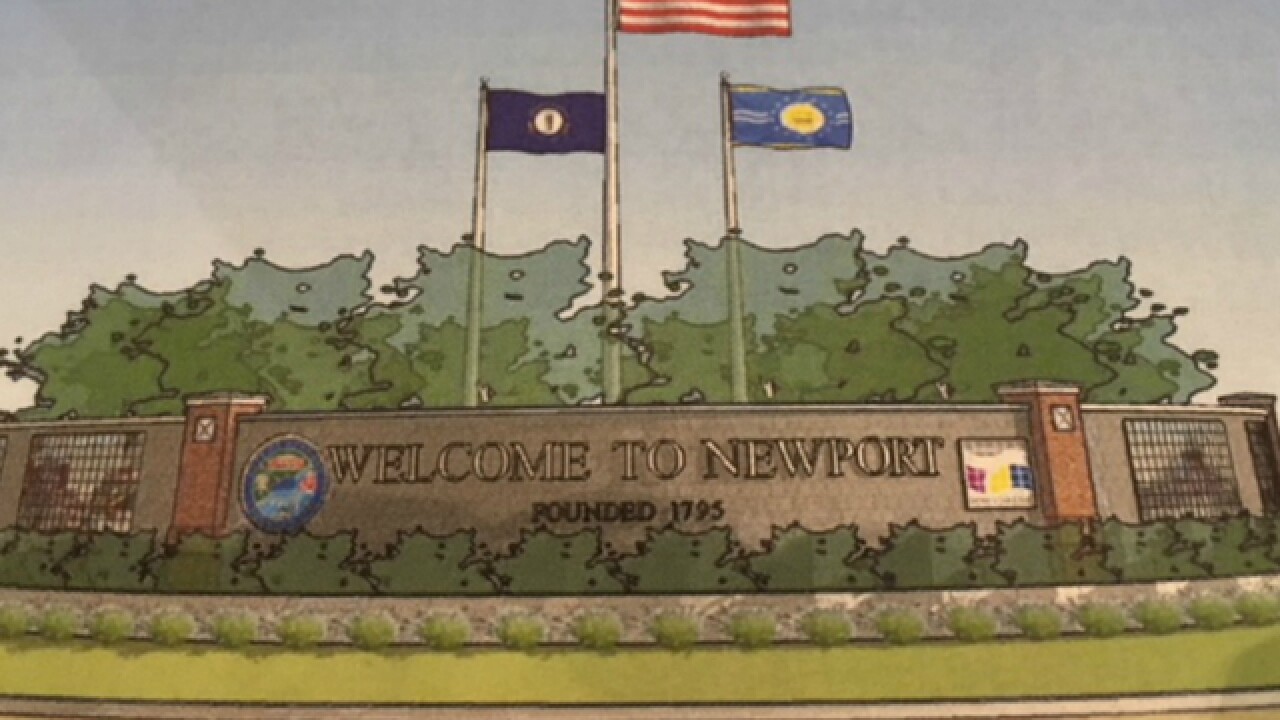 Copyright 2017 Scripps Media, Inc. All rights reserved. This material may not be published, broadcast, rewritten, or redistributed.
<p>A rendering of a monument commemorating Newport's history, to be built at the two new roundabout circles coming as a part of the Ky. Route 9 redesign project, set to complete in the fall 2018. Officials announced the monuments Wednesday, Oct. 4, 2017 (Provided)</p>

NEWPORT, Ky. -- It's a plan to better connect northern and southern Campbell County more than a half-century in the making, and now officials have announced the icing on the cake.

"We have three major entrances to the city of Newport," said Jack Moreland, who heads up the Northern Kentucky economic development engine, Southbank Partners, during a news conference Wednesday. It was held at the intersection of Third and York streets at the foot of the Taylor Southgate Bridge -- one of those Newport entrances.

The other two entrances Moreland was referencing are the Newport base of the Veterans' Memorial Bridge into Covington and the border between Newport and Wilder on Ky. 9.

"Today, I'm announcing a partnership... to build decorative monuments on the two roundabouts" that were a part of the Ky. 9 redesign, Moreland said.

The announcement was welcomed news.

"The city of Newport is excited with this once-in-a-career -- really, once-in-a-lifetime -- opportunity," said City Manager Tom Fromme. "It's very rare, when you look at it from an administrative point of view, when you have an opportunity such as this to redesign, to revision the entrances to your city.

"(These monuments) will make for a grand entrance-way for our city."

It's a plan that's been on Newport leadership's minds for decades.

"Since 1964, they've been talking about a boulevard along the west side of Newport," Moreland said.

That boulevard has been coming to fruition over the past five years, in the form of the Southbank-backed Route 9 Connector project, which aims to connect Ky. 9 and the AA Highway to the Taylor Southgate Bridge in Newport.

Beyond connecting Newport with the rest of Campbell County, leaders hope the redesign will ease traffic congestion as well as spur development throughout the city's west side.

IN DEPTH: Ky. 9 predicted to be traffic 'game-changer'

Newport started planning along the proposed Ky. 9 extension, creating a transitional district along the Licking River route to include everything from light industry to high-density residential units, Fromme told WCPO last year.

The largest parcel along the extension, from 12th Street to the Taylor Southgate Bridge and Newport on the Levee, is the old Newport Steel property at about 20 acres.

New Riff distillery -- based on the east side of Newport -- plans to open a campus along the Licking River stretch.

Moreland said work on the monuments should begin this month, and he expects the entire Ky. 9 project to be completed by fall 2018.